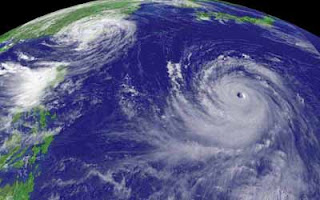 FIRST WE'LL GET THE PICTURES I BORROWED OUT OF THE WAY. I'LL GET TO THE GREEN EGGS AND HAM PART A LITTLE BIT LATER. FOR SOME STRANGE REASON THESE TYPHOONS ALWAYS LOOK LOTS BETTER FROM ABOVE THAN BELOW. 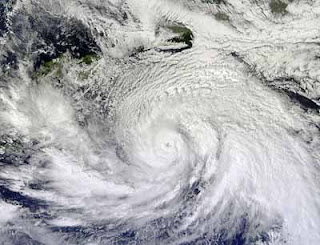 
It’s going on Midnight Thursday over here right now and I think the worst of it is over. I only went outside a few times to get coffee, smokes and food.

When I walked here this morning I used my big golf umbrella. The wind was turning it inside out so I decided to close it and just get wet.

Around 3PM when I went to grab some take-out lunch it was raining real hard and real windy so I borrowed a smaller umbrella. It held up pretty good until I turned the corner of the street and got a good blast of wind. That bent a few spokes.

Coming back with my Taco-Rice-Cheese in a plastic bag and the open umbrella was hilarious. I’m glad the wind and I were both heading in the same direction. The Flying Nun ain’t got nuthin on me.

Now, I owe somebody a new umbrella. I hope it wasn’t the wife’s. Her birthday isn’t until September.

This looks like it may have been the strongest typhoon we’ve had hit Okinawa in a few years. I remember awhile back one that was so strong it snapped concrete telephone poles. The winds were something like 120mph. One of the poles landed right on the hood of a police car.

Being cooped up on rainy days really drives me crazy. But, I took a long nap this afternoon and drank about a dozen cans of ice coffee and my electricity hasn’t been knocked out, yet. So, I guess I’m good to go.

I’m done complaining and might even be over the non-writing slump I was having all week. Maybe, the typhoon was just what I needed. Whenever a good butt-kickin’ typhoon hits I remember how lucky I am.

See, way back in the early 60’s I was riding around on this big Navy Boat. Maybe 1000 guys on this big grey, flat-bottomed boat and we got caught in one of these typhoons. They could’ve filmed the Poseidon Adventure there if they’d have had a cameraman with us.

Before I ever got on a Navy Boat, I always thought that Dr. Seuss just made up that story about Green Eggs and Ham. He didn’t dream that stuff up; it’s true. Maybe he was in the Navy once. It’s the only place, in my life, where I’ve seen Green Eggs. I don’t know where they come from, out of a can, maybe.

Anyway, picture about 1000 guys in a room inside a boat carrying Green Eggs and Ham on metal trays and walking around on a metal floor. Then start rocking the boat enough to make them slip, slide and fall down.


TYPHOON CHABA, I'M NOT IMPRESSED. YOU WERE WEAK!

Posted by RyukyuMike at 8:47 AM

Great story! Well glad you are safe and the worst is over. I wouldn't survive too well on a small metal navy boat.

Jason,
The boat wasn't too bad when no typhoons were around. It's just the Green Eggs that got to me!

Glad to hear that you're safe. I'll pass on the green eggs and ham.

LadyE,
Well, I'm fine but, the wife is upset about her umbrella.
She claims green eggs are good for you. Me, I'm keepin' my mouth shut !