Train your eyes to find patterns or designs when you travel.  Then fill your viewfinder or LCD screen with them for some one of a kind travel photos. Sometimes the designs are things you see everyday, maybe, you walk right over them without even giving them a second thought. A spiral staircase or a manhole cover for example, may make an eye-catching picture if it’s looked at from an angle you hadn’t thought of before. Some patterns are manmade, others occur in nature.  It’s just a matter of you being in the right place at the right time and recognizing the opportunity when it comes along then, getting yourself in position to capture the shot. 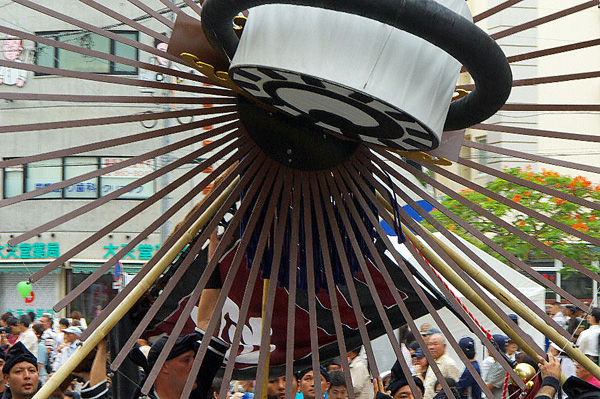 The photo resembling a mob scene was taken at an annual parade on the International Avenue, Kokusai Street in Naha Okinawa, Japan. The design is something that rests atop a 30 foot bamboo pole called a Hatagashira. It displays the banner of the village where the young men hoisting it reside.  I have thousands of pictures of them dancing in the streets trying to balance the pole in an upright position but had never before thought of taking a shot while they were carrying it to their assembly area. Not so blue skies that day and the distracting telephone wires, I knew I’d be dealing with when the banner was raised, gave me the idea for this composition. 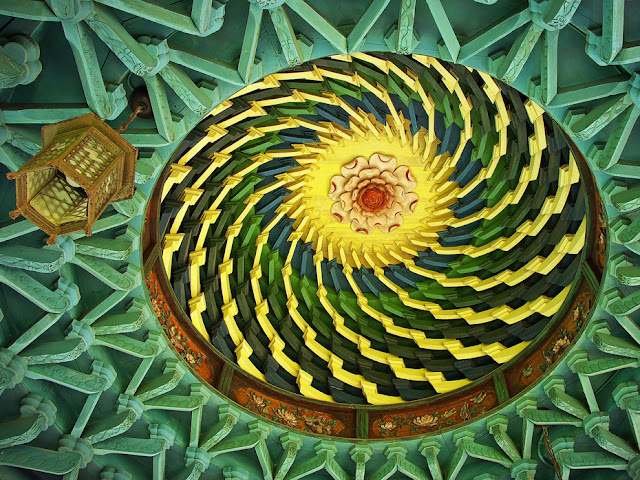 The bright yellow circular pattern is something on the ceiling of a Chinese Pagoda. I had probably spent 20 minutes under it one day, trying to shade myself from the hot summer sun and not even noticed it until someone pointed it out to me. This was a little tricky, getting this shot. I had to lay flat on my back on the cool cement floor.  There was no way to compose the shot using a tripod and camera I was equipped with and get directly beneath the design. I had to improvise but it was only for 1/6 of a second.
Both of these photos turned out to be favorites of mine for the particular days they were taken. It’s not so much that they were some kind of award winning photos; it’s because they were different from my normal compositions and probably a whole lot different from the photos everyone else walked away with that day.

Look for patterns and designs when you’re out and about and catch some one of a kind travel photos, too. Thank you for reading my Photography Tips and commenting. I have plenty more to share with you.

Have a great weekend!

Posted by RyukyuMike at 2:17 AM

Whoops!
Hermitbiker,
Maybe someday I'll swing by California and give ya one!