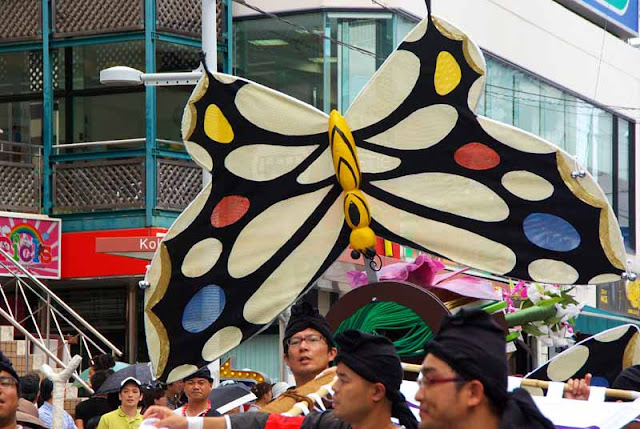 This photo was taken October 10, 2010 on Kokusai Street, the International Avenue of Naha Okinawa, Japan. A Parade is held there prior to the start of the Guinness World Record Tug-O-War every year.

The Butterfly is attached to the end of a humongous pole called a Hatagashira that will be raised once the guys hauling it clear the telephone wires criss-crossing the street. The bamboo pole is around 20 feet tall, has a Village pennant streaming down it and each District of the Village has their own "Good Luck" symbol or contraption affixed to the top.

What these young men do is take turns dancing around in the middle of the street. One guy at a time gets to hold the pole straight up in the air and dance with it. The thing is pretty heavy and some guys have a hard time keeping their balance. So, their buddies have to help prevent the contraption from falling into electrical wires; they have smaller bamboo poles with forks on the ends to catch the Hatagashira if it falls.

When the guy with the big pole gets exhausted, someone else grabs it and shows off their pole dancing skills. It ain't like girly pole dancing (from what I've heard, anyway) because these guys keep all their clothes on. I'll see if I can dig up some of the dancing action photos for you later, my Missus wants to go for a ride. So, I'll grab my camera and see if I can spot a REAL BIG, LIVE BUTTERFLY and shoot it for you.  More later.....

Posted by RyukyuMike at 6:33 PM