Okinawan Folktale: Legend of the Monk and Okukubi River 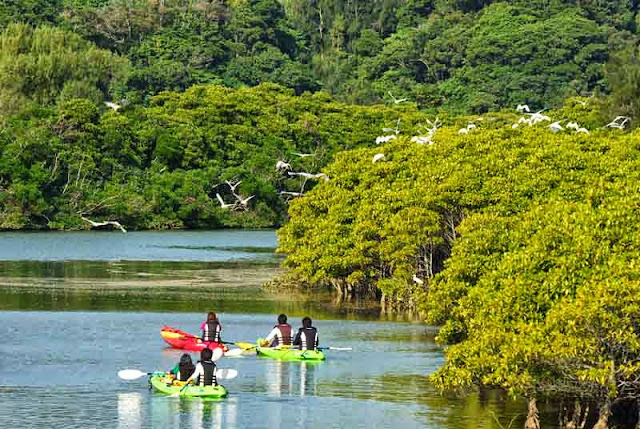 Note: Similar versions of this story, first appeared in Stars and Stripes November 2015.


Editorial and layout requirements, made the signs, unreadable for Japanese followers.


It is my hope, that educators may be able, to print and distribute this version to students.


Feel free, to use the article as a travel guide or handout for language classes.


The text and images, may not be sold or, reused online, without authorized licensing.


Photographs and text by Michael Lynch 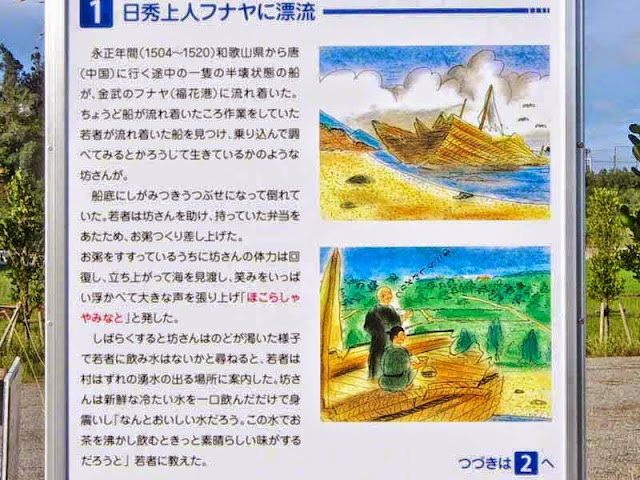 Early in 1500, a Buddhist monk was on his way to China, when he was shipwrecked. The wreckage
of his ship was adrift at beach in Kin Village of Okinawa. A local, saw the wooden craft and rescued
the priest, who barely survived the ordeal.
The young man, using his own lunch made some rice gruel . The monk, recovered quickly after he
ate the meal. He stood up and took a looking towards the ocean shouted, "Hokorashayamina!”

After a short time, the monk asked the young man for something to drink. The youngster took him to a spring on the outskirts of the village. When the monk drank a sip of the fresh water, he shivered and said "How delicious this is! You could make an excellent green tea with this refreshing spring water." He taught the method of making tea, to his young savior. 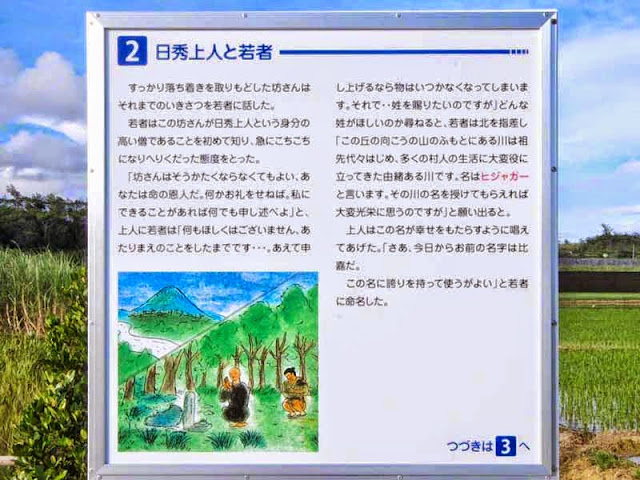 The Buddhist regained composure and started talking about what had happened to him. The youth became tense, as he discovered the monk held the high position of Nisshu Shonin. The monk told the lad,”Please don't be nervous. You are my lifesaver. Feel free to let me do something for you in return.". But, the young man said, " I don't expect anything from you. I just did what I needed to do as a person. If I were to venture a favor, I would love to have a surname given by you."


The monk asked him what kind of surname he wanted to have and the young man said, " There is the river called Hijaga at the foot of the other side of the mountain. It has nourished many people from generation to generation. I would be very honored to be given a name related to that river." The Buddhist monk started chanting and said, " Your surname is Higa from now on. This name will bring you a lot of happiness. Please use it proudly." 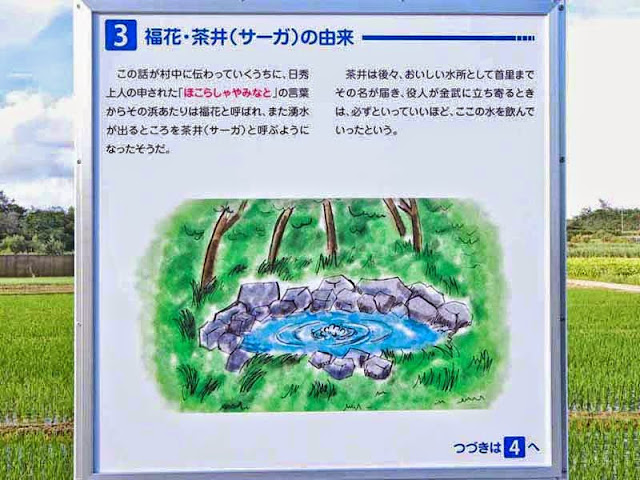 Origins of Fukka and Saga

The story about the Buddhist monk and the young man was spread by the locals and, they began calling the beach (where the monk had been adrift ) Fukka (福花 = flowers of good fortune) and the spring Saga (茶川 = green tea river) named after the legend of the monk.


Saga Spring became famous for its delicious water, utilized in making green tea. Word of this tasty tea spread throughout the island. When royal officials from Shuri Castle came to Kin, many of them would visit the spring. 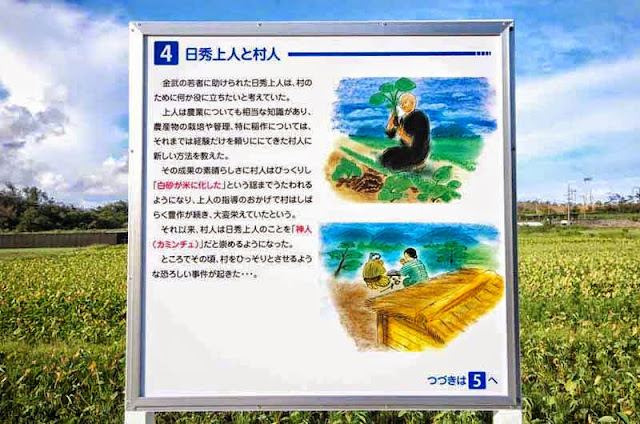 The monk wanted to do something for the people who helped him and treated him so well. He had extensive knowledge about agriculture, so he taught the natives (who only knew farming learned from experience) how till the land using the most efficient methods and, showed them the most advanced technology for the cultivation of crops.


Thanks to the Buddhist Monk's guidance, they had a bountiful harvest and the village prospered for a long time. Because of the surprising results of his guidance, some locals recited, "White sand turned into rice!" Many people considered the monk to be a "Kaminchu" which is a godly person.

Then, terrible things began to happen in the community... 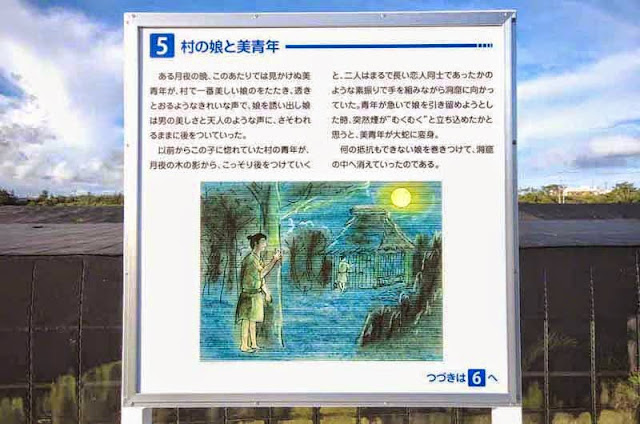 One moonlit night, a good-looking stranger showed up. He awoke the most beautiful girl in the village with his fascinating voice. She was tempted by his handsome features and followed him as, if she were in a trance.


A boy, who had a crush on the charming girl, hid and followed in the darkness. He saw them walking arm in arm as if they had been dating for a long time. He wished to keep the beautiful girl away from the handsome boy. Suddenly, the air was filled with smoke and, the handsome boy turned into a huge serpent.


The snake coiled around her body, so she couldn't run away, and they disappeared into a cave. 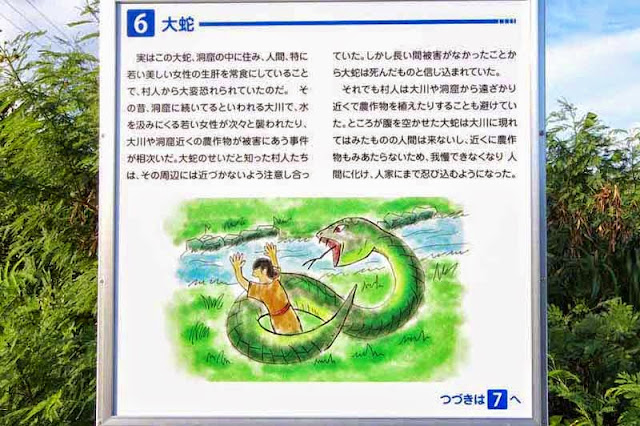 As legend goes, the snake was living in the cave and eating livers of human beings, especially, youthful charming virgins and, the villagers became frightened. At the river that leads to the cave, many young girls who went to draw water had been attacked by the snake. The serpent also wreaked havoc on the farm products of the village so, the locals tried not to get near the cave or river. After no one had been attacked for a long time, people began to believe maybe, it had died.


The villagers still kept away from the river and the cave and refused to grow farm products around that area because of the serpent. The devious vermin, once again, began transforming into a handsome boy and started sneaking in people's houses in the hamlet. 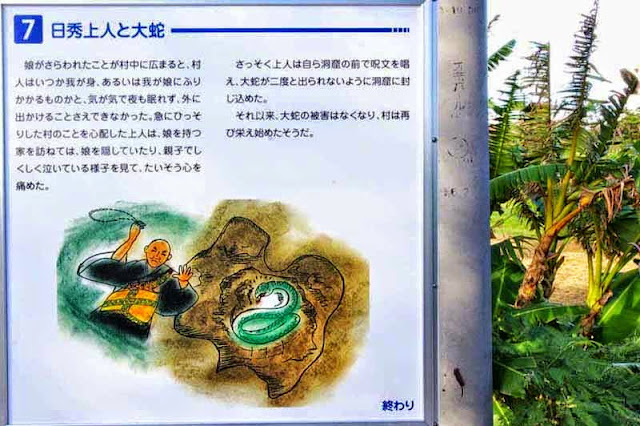 Once villagers learned of beautiful young girls being kidnapped, they couldn't sleep well nights and stopped going outside. They feared being eaten by the snake or, worried their daughters might be kidnapped by it. The monk became concerned about the villagers and, when he visited them, noticed they were hiding their daughters and crying. He decided, some action would be required to stop the terror.


At the cavern entrance, the Buddhist chanted an incantation to seal snake inside forever. Since then, nobody got attacked by the snake. And, the village began to prosper again.

MORE FOLKLORE
Posted by RyukyuMike at 1:09 AM