Bar Hopping with the Cameras

Last night this event took place, over in the Ushina part of Kin Town.

It's sort of a seedy bar district, where the best thing to do, is bring along someone to translate.

My accomplice, who's also learning to shoot a camera, came along for the fun. 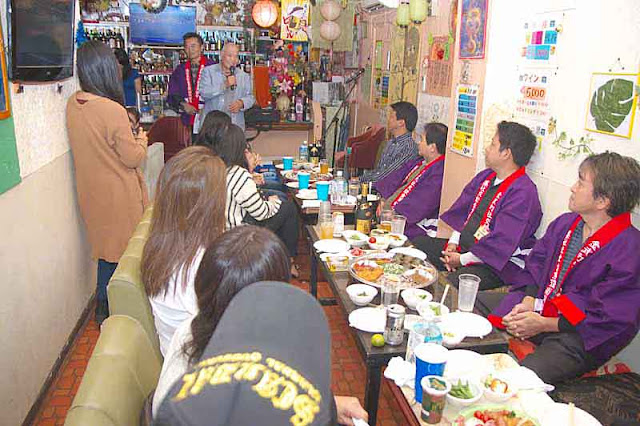 Mami Sakiyama, the gal standing to the left of the tables, would be my assistant.

She's toting the Canon G12, in AUTO mode, listening to the opening speeches.

At 6:29PM, I took this photo, from the entrance to the bar, which had standing room only. 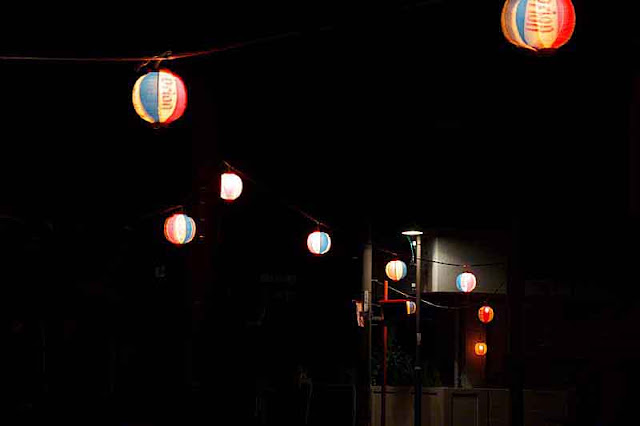 It had been a long day, before we even arrived at this evening festival and, I was tired.

Live bands and entertainment, was what I needed, to keep me going, not speeches.

So, I decided to get out in the streets, to see if anything had started, yet.

We walked the side streets and could smell food cooking on charcoal grills.

Mami tried to take photos of the Orion lanterns, blowing in the wind.

All the camera would do, in AUTO mode, was give her blurry, overexposed images.

Well, she got a quick class on, ISO, aperture, shutter speed and, the use of a tripod.

Now, she's doing everything in Manual mode.  She's going to start shooting like a professional. 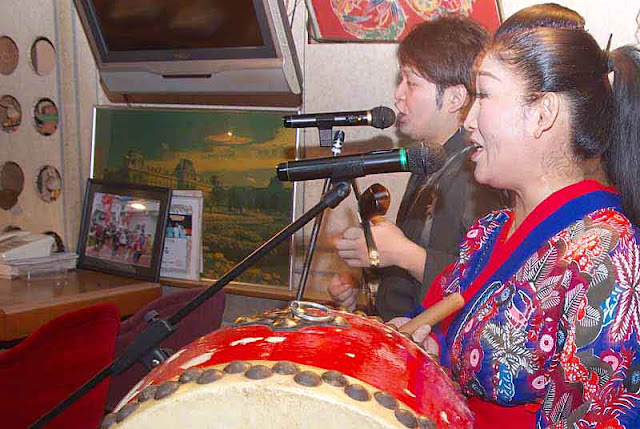 It was around 7:30PM when, we heard the first band, playing Okinawan Mineo.

There are plenty of people, drinking, dancing and, hopping around, in this bar.

Awamori and the lively beat of the drum and sanshin, gets the crowd going.

I stayed at the entrance, to take this shot, knowing a tripod would be worthless, inside.

I got the to Mama, running the bar,  to let us shoot from behind the counter, too late.

Just as consent was given, for Mami to get back there, the band finished playing ! 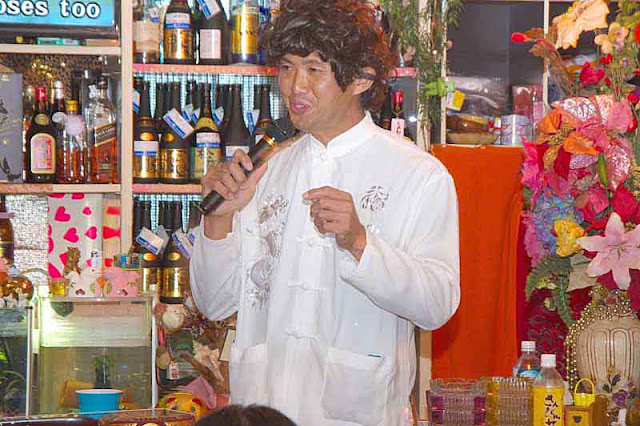 Shortly after 8PM we caught this talented individual, wearing his wig.

A comedian, singer and  musician, he's a one man band.

He was mimicking, Louis Armstrong, singing, What a Wonderful World. 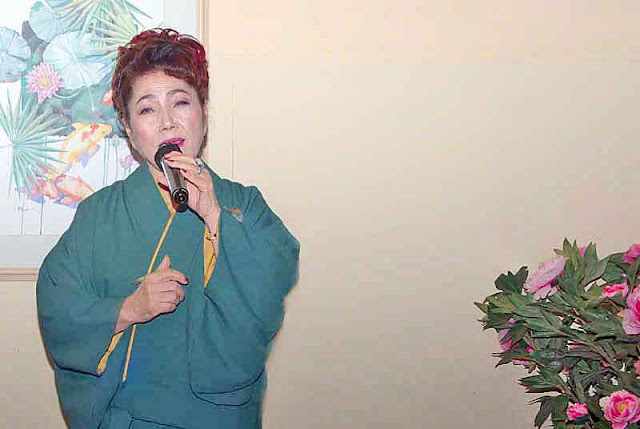 This woman is a Japanese Enka singer who's very popular in Okinawa.

By now, you'd think, I would know her name but, I'm terrible at stuff like that.

Let's just call her a sweetheart, for now and, we'll get her name later. 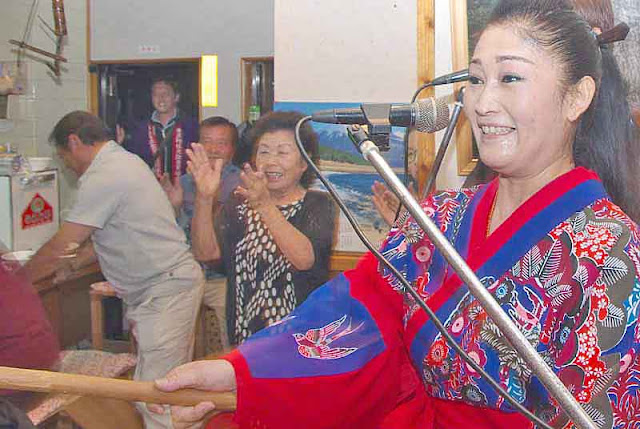 It was so crowded, at this location, I tried shooting from outside, through an open window.

When that, didn't work, I squeezed up against a wall at the front door.

It was going on 8:30PM, cold outside and, I'm getting hungry, at this point.

Inside these bars, people were jumping around and, sweating; it was so hot. 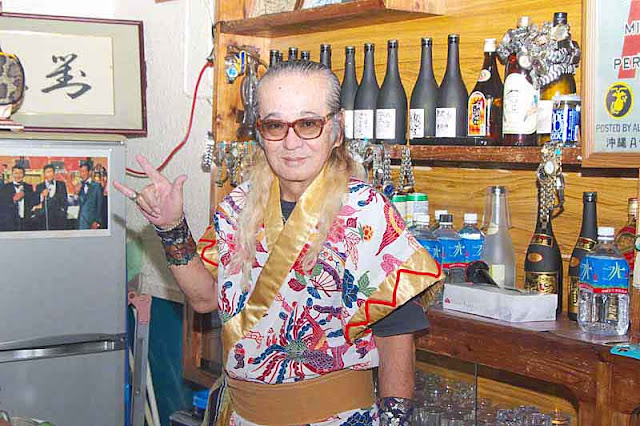 So, off we went to another fine establishment and met Tomomi, this hip dude.

It would have been nice if, we had time to chat with him but, that never happened.

Believe it or not, I first met this character, in a cave, on another island.

And, I was going to have Mami ask, whether he 's got religion or, is just crazy, like me ! 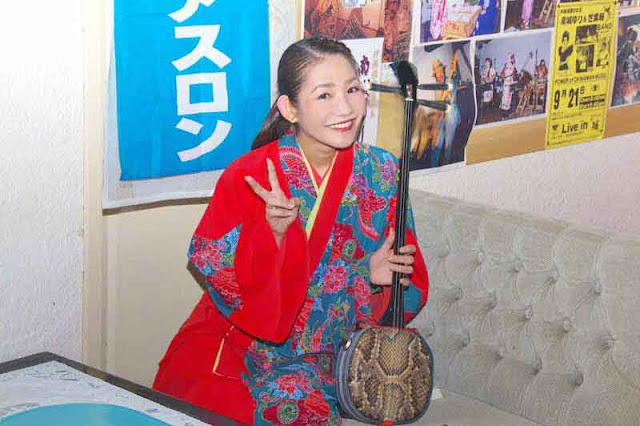 Nobody picks a sanshin and sings traditional Okinawan songs better than Sari.

We've met a few times before and, I always give her a photo.

Waiting to go on stage, she's messing with me and, flipping that peace sign. 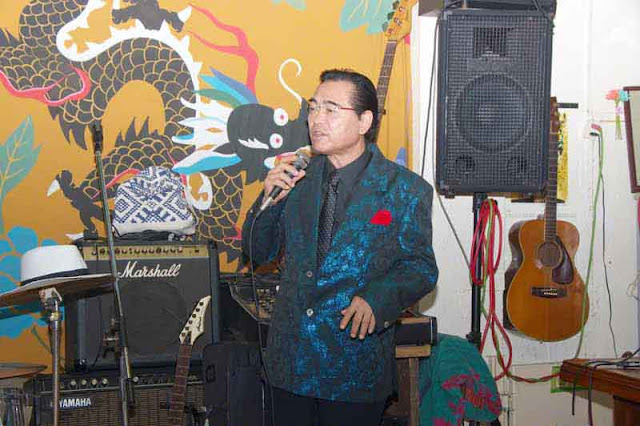 This singer croons tunes has CD's of his music out and, posters of him, hanging all over town.

He's known me for years and, we run into each other in bars, sometimes.

He also, owns one of those security companies that, check on your property at night.

He knows my name, too. I should probably, ask him what handle, he goes by. Huh ? 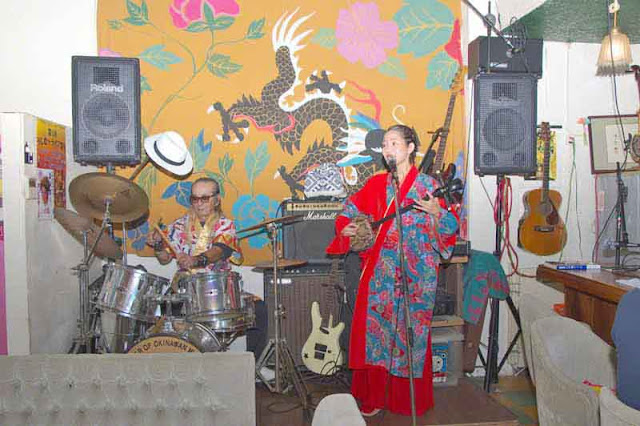 Shortly before ten o'clock, I finally get to hear Tomomi and Sari on the stage.

It isn't easy, to take photos, under these conditions; you have to be quick.

Wait for a moment, when no one else, gets into the scene and, shoot fast and steadily.

All the while, I'm watching the subject's movements and, their eyes.

More photos will be deleted than, are processed. That's the way it is and, always will be. 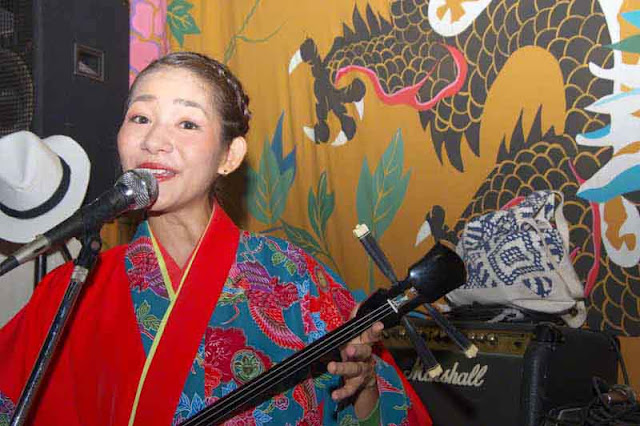 By 10PM, Mami, told me the battery in her camera, went dead.

So, I let her take the tripod and, my Pentax K3, to see how she'd do, shooting on her own.

Across the room, I would signal, Sari, to turn towards the camera, occasionally. 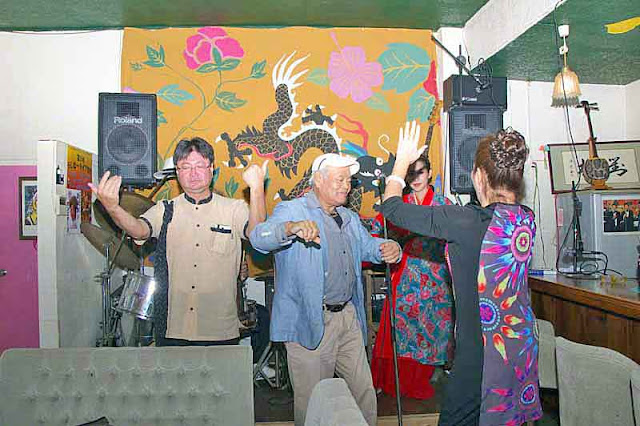 It's not necessary to be intoxicated, to do this Okinawan dance.

But, for some people, I imagine, it helps ! 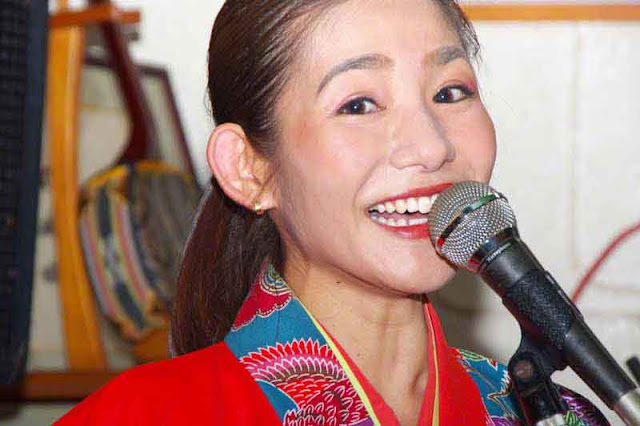 The only way, for Mami, to get this shot was alongside the front of the stage. 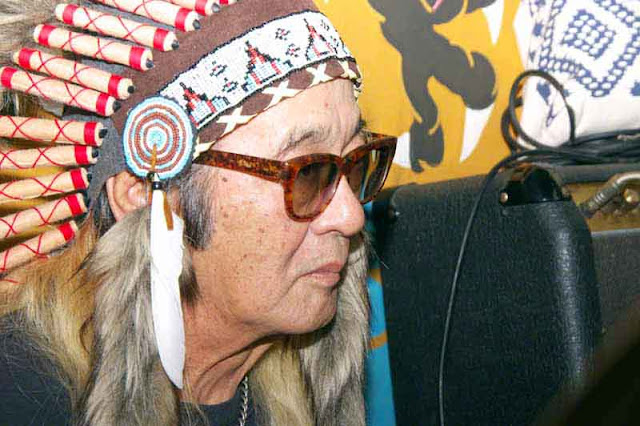 Next, she nabbed this image of the drummer wearing his chief's bonnet.

He had called me and, said, "My son's bringing my American Indian hat," minutes earlier. 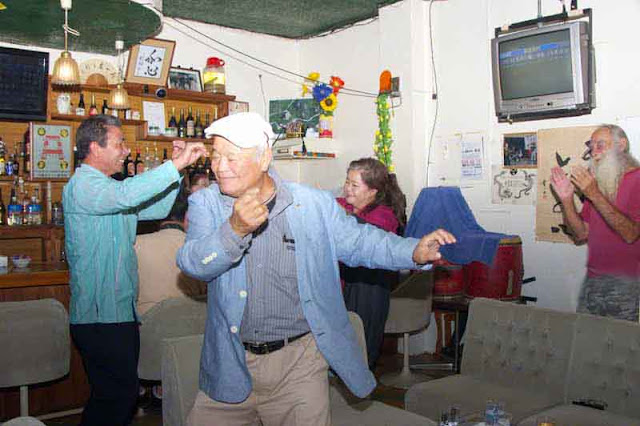 The Kachashi dance, is done as as grand finale at any Okinawan event.

It doesn't matter, who you are, they are going to grab you and, have you dance.

So, as soon as, Mami got done taking this photo, I took my camera away from her.

So, she could go, enjoy the fun while, I sneaked outside for a smoke !

Bar Crawl  or Pub Crawl -- Whatever You Call It Photos

Photos from Kin Town Live Matsuri Number Two
Posted by RyukyuMike at 5:37 AM