It's a combination of a parade, religious festival, beach party sort of thing.

Every year, around the third of March (Lunar Calendar) Sanguacha takes place on Henzajima. 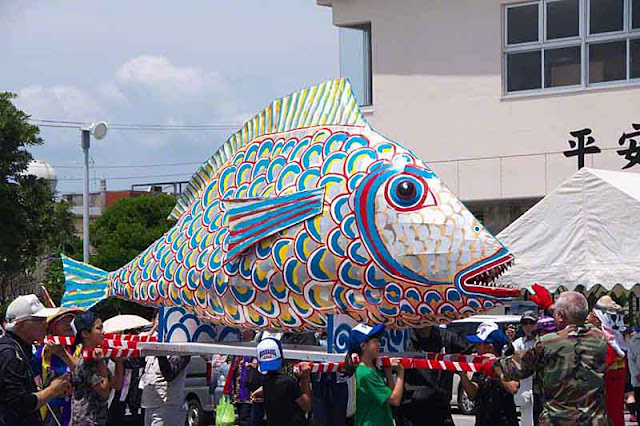 One of the highlights of the festival is a procession, where this fish shrine is carried.

An outcropping of rocks, off the coast of Henza Island, is their destination. 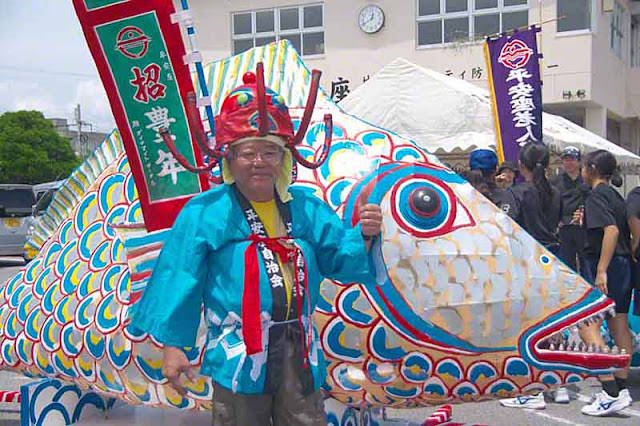 One of the purposes of this celebration is to pray for a good fish harvest and safety at sea.

Octopus happens to be part of the ocean harvest in this area.

So, a gentleman wearing an octopus hat posed for the camera before the parade started. 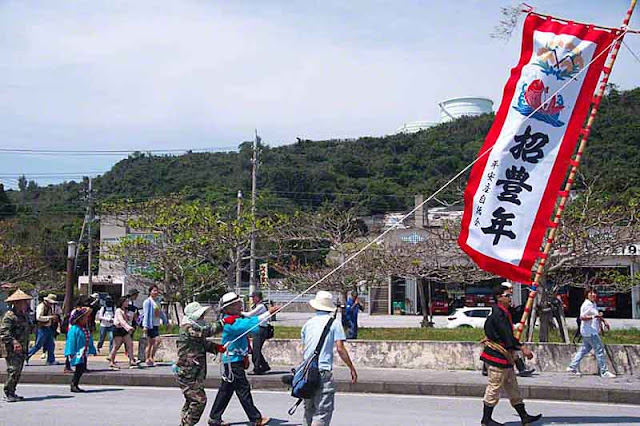 Skipping the rituals downtown, I headed out on the highway and waited for the parade.

Hundreds of festival goers would be coming down the street, moving towards the sea. 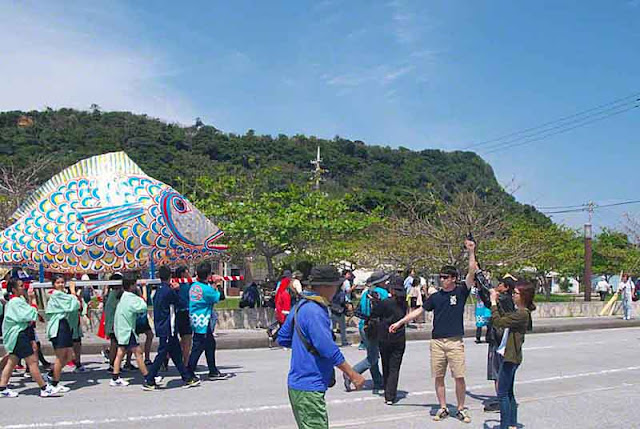 Going on 2 PM the afternoon sun would be blinding unless the camera was facing the sea.

Knowing this, I was sure plenty of rear-end photos would be collected before calling it a day. 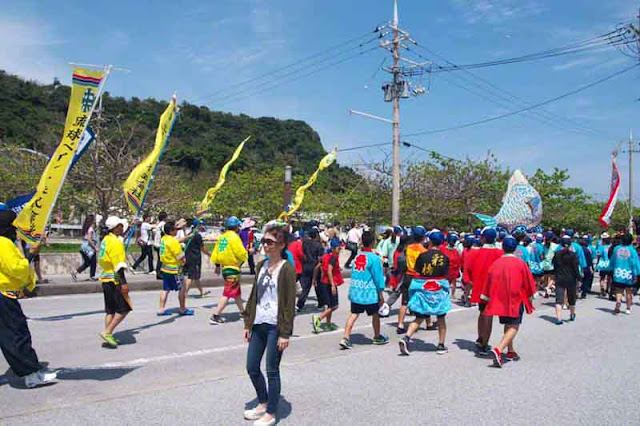 Every age of individuals may be seen at this event, from babies to folks in their 80's.

And, you'll see every color of the rainbow in custumes or, on flags and banners. 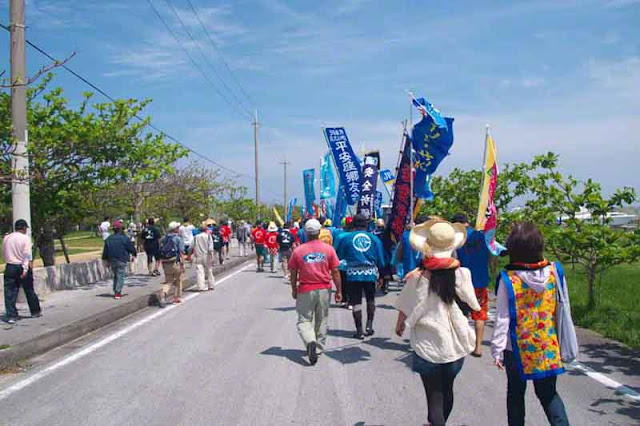 Down the road they go, parading towards the ocean. No faces are visible. Good.

Once a magazine photo editor told me, "Women don't like photos of their fannies."

Hah. That was before Stormy and some president's wife came along! 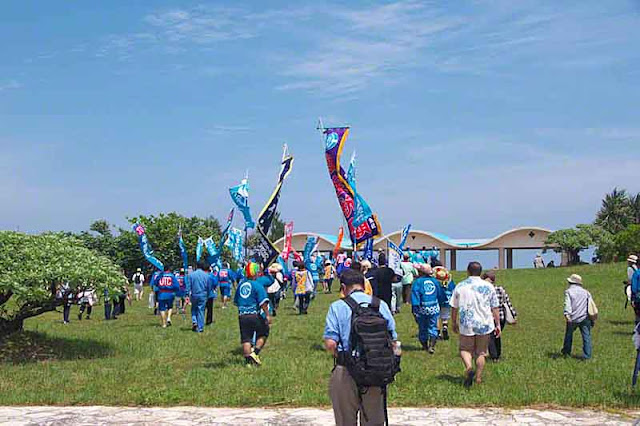 Off the street and on to some grassy knoll, the participants march, heading to the ocean.

From the looks of this scene, you'd never guess an ocean is nearby. 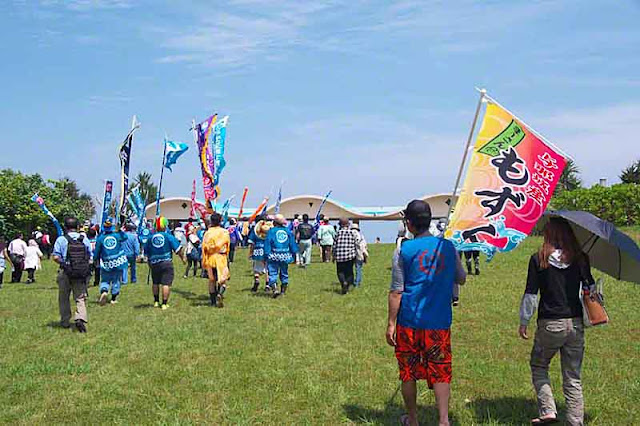 Please, be patient. Once we pass that blue, wavy roof, you'll see the sea.

It's no fun for me, looking at all the rear ends, either. Blue skies are OK. 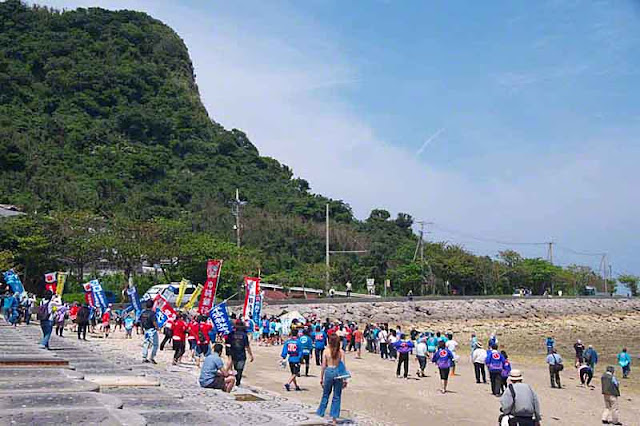 A brief pause before everyone enters the sea. The tide must be low for the rest of the hike.

The hills to the left remind me of Hawaii's Diamond Head.

We should make a stairway and trick tourists into climbing up there. No? 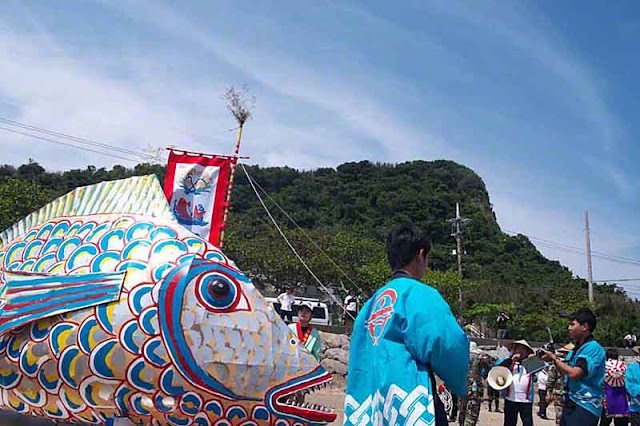 One of the things I wanted to photograph, was the fish shrine, under Diamond Head.

A commercial photograph could be made, for the right price and right people.

Just have to get all those people and telephone poles out of there. 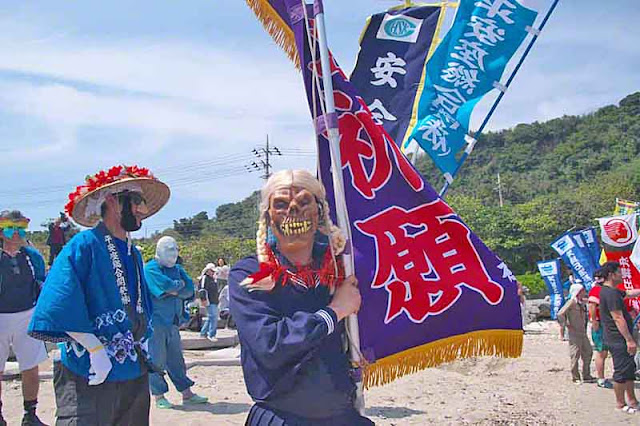 One of the spookiest costumes was this corpse of a schoolgirl looking creature.

She was posing for everyone. I took a snap just to keep from being bitten. 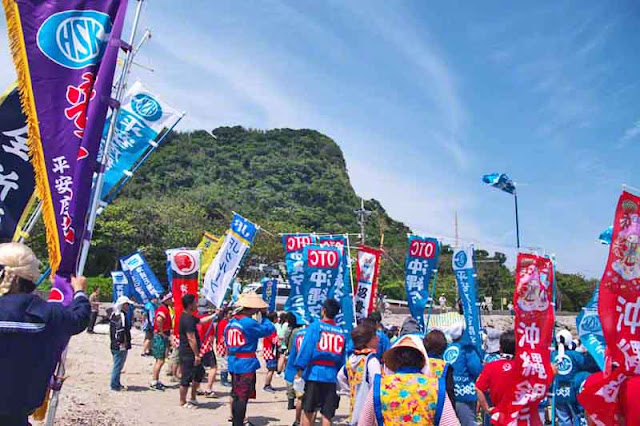 Close to 2 PM the procession started marching into the sea, below Diamond Head.

It was fairly windy and, blew the banners so, most of them were backward. 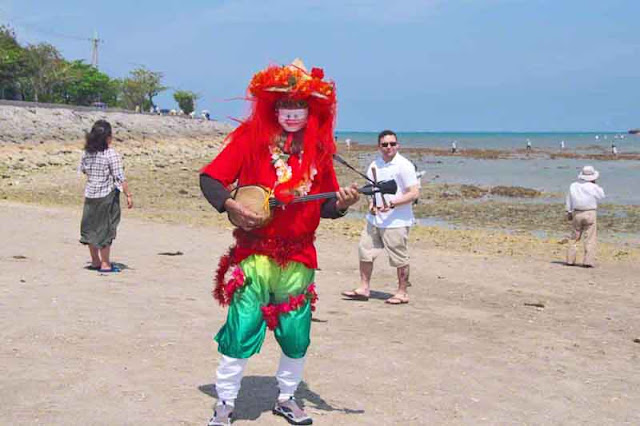 Another colorful character was this sanshin player on the beach.

It seemed like a young teenager until you got closer and looked at the hands.

Now, I'm thinking the guy was closer to being 70ish, like me! 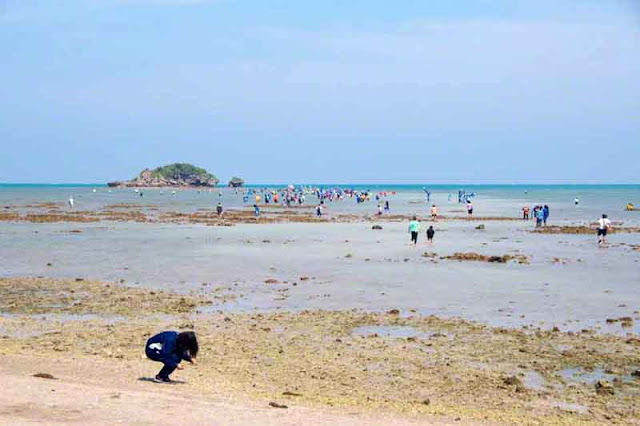 The procession, carrying the fish shrine, wade out to a rock outcropping at sea.

One of these years, I may buy some low tide wading shoes and accompany them.

Another thought I had, was get a boat to take me farther out to sea for the photography. 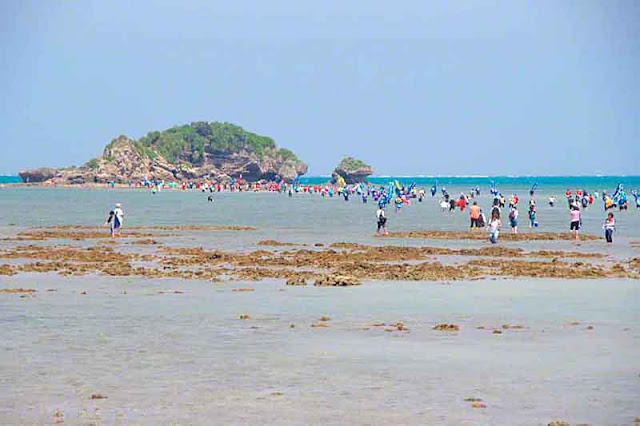 The outcropping of rocks, too small to be called an island, is known as Nanza.

The crowd climbs up on the outcroppings and conducts rituals.

Prayers for prosperity and safety at sea, as well as for the farmers, take place.

The fruit of the sea, the octopus is consumed along with some alcoholic spirits, awamori.

The festival-goers return to the beach, where dancing and singing may take place.

By that time, I'm long gone and home downloading cameras.

It might be worth checking in to a nearby hotel on that island, to get the rest of the story!

Posted by RyukyuMike at 1:11 PM