"Naked" Matsuri Got Me Wondering 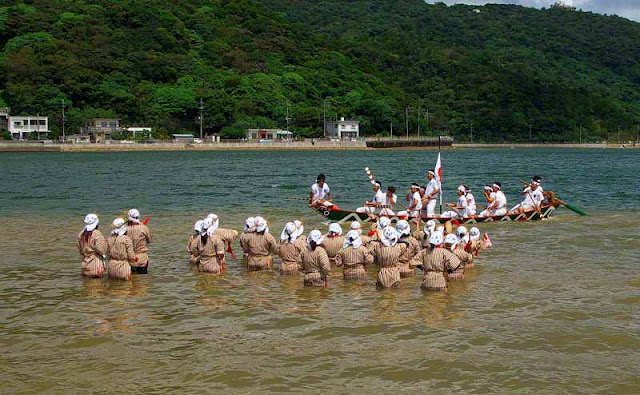 Tonight, or early tomorrow morning, I'll be headed up to the Unjami Matsuri (Festival) in Ogimi Okinawa, Japan.  Here's a photo from last year's Unjami.

It was an OFF year, I guess you'd call it.  No big mystery events took place, as far as I know.

But, this year is the ON year.  There is a portion of the festival, men can't witness.

Women, only, get to go all the way up the mountain for some sort of ritual or ceremony.

Last month was the ON year for the guys up in Ada ( SHINUGU MATSURI ). Only males were allowed to go up in the mountains for their rituals.  None of us got naked.

Not many guys are really into naked men.  Not in my social circuit, anyway.

Researching for the Unjami Matsuri 2011 I came across something on Google Books that I had never seen before.  MATSURI: THE FESTIVALS OF JAPAN P.148  By Herbert E. Plutschow,  Patrick Geoffrey O'Neill

They say stuff like, "Unjami, festival of Ogimi-mura, Okinawa prefecture and the 'naked' matsuri discussed above".  YIKES !

Now, I realize that the government of Japan outlawed some of the naked stuff that used to go on at festivals of yesteryear in Okinawa, Japan.  Maybe, what goes on in the mountains stays in the mountains.

So, "Naked" Matsuri got me to wondering.

I wonder what's going on up in the mountains of Ogimi tomorrow.

So far, I haven't been able to get a lady willing to pack a camera and climb the hills to get the whole story.

I wonder if the folks up in Ogimi believe in bearded ladies !