Fly United From Okinawa, Japan (Photo) This Is Science OK? 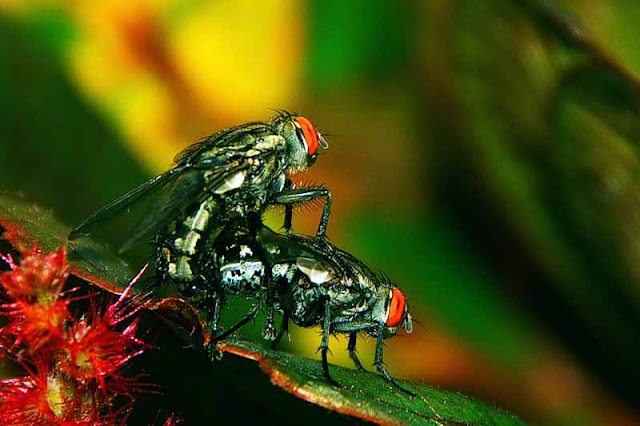 That's right. The photo you're looking at I wanted to title "Fly United" but, I don't want the guys from some big airplane company coming after me so, I decided I'd better make a scientific title and caption.

This couple of flies were discovered in Okinawa, Japan.  They can be found just about anywhere around the world.  Their common name is Green Bottle Fly or a Blow Fly.

The science part is where it gets a little confusing and I'm really no scientist so, I'll give you the references I found.  Then, you can decide who you want to believe.

If you are really interested in bugs, there's plenty of information for you at both these sources.

Should you be looking for work, the guys over at Pest Management got a big banner you can click on that says "We're Hiring".

Now, that's got me wondering.

If I applied for a job and had to go for an interview, I wonder if I could Fly United from Okinawa, Japan !

Posted by RyukyuMike at 6:31 PM

I'm now really starting to get worried about you... I mean kudos for an excellent macro shot, but seriously - I don't even want to know what you were doing perving on those flys. I'm not even sure if there's a name for that kinda voyeurism! ?;-p

I'm very impressed with your setup... very good zoom. I just can't imagine the sound-track that goes along with the movie version.

AdelaideBen,
Pure science, man. I was actually shooting a festival and waiting for some activity to start. Got bored and noticed the flies on a bush right next to me. 250mm on the zoom.

Yeah - they say it starts out like that, all innocent. Then before you know it you're searching the backyard for anyway to get your fix of the ol' six-legged action.

Still... I was impressed. Not least by your eyes.

AdelaideBen. Not to worry. This is science OK ?