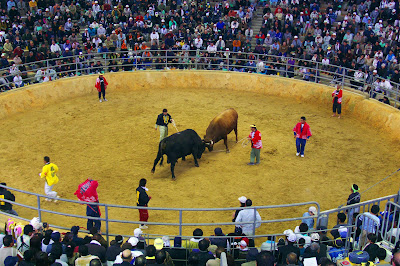 After the Crab and Bird got flushed down wherever things go after you empty the Recycle Bin, I decided to go have a beer last night. It all started off innocently enough, until I ran into another cameraman; then it turned into a few more beers and some Karaoke. Soon it was 1:30AM and I wandered on home, knowing my plans to catch some sunrise shots were probably doomed. But, the good news was, I had written a note to myself and stuck it in my cigarette pack; something about a total eclipse of the sun 22 July, this year. A potential MILLION DOLLAR PHOTO ! And I was invited to go shoot it up in Kyushu, Japan.

Lots of things are done differently here: People drive on the left side of the road, Take a shower before they get in the bathtub, Get their butts washed while they're sitting on the throne, and conduct important business in bars after working hours ! And the Bulls fight each other instead of some guy with a cape and a dagger. But, that's not what this POST is really about.

Some nice lady in Colorado emailed me this morning asking me to sign and return Copyright papers for publishing this and another photo along with a story about Okinawan Bullfighting (of course not this exact photo, but one like it). As soon as I see it, I'll believe it and tell you where to find it and I hope NATIONAL GEOGRAPHIC finds it, too and asks me to go to Kyushu and shoot the total eclipse of the sun ! I'm done feeling crabby, now; think I'll go home, take a shower, take a bath and crash early to see if I can catch the sun come up tomorrow.
Posted by RyukyuMike at 12:38 AM

What an awesome image! That place is jam packed! I hope to see it in print soon :)

I don't think I would stand that close...