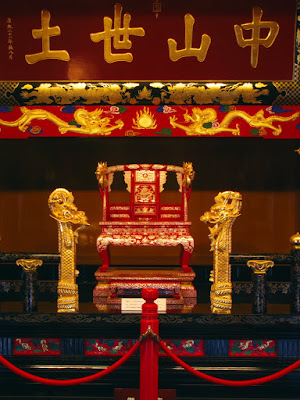 This is another picture I'll never forget. I didn't exactly get apprehended, this time, but "Doc" did and I didn't want to walk 30 miles home carrying all my camera gear. Somehow, I knew if he got thrown in a cell, he wouldn't let me have his car keys. So, when the Security Guard took him in for questioning I went along, just to see what would happen.

I felt a little guilty because I told a worker in the Museum that Doc was from the newspaper and he called Security.

Apparently, it's OK to take pictures of the Ancient Ryukyu King's Throne for your own personal use.

If you're a reporter or somebody who's going to make a living off your photos, get authorization from the Shuri Castle Office.

The Guard that hauled us away couldn't of been five feet tall, but wore a policeman-like uniform and lectured us all the way through (what seemed like) half a mile of corridors and tunnels, waving his arms and pointing fingers.

I started thinking out loud, " Let's just give him our Memory Cards and RUN, Doc, or WE'RE GOING TO JAIL!"

It turned out, all you have to do to be authorized to take pictures for OTHER THAN PERSONAL USE is go to the office first and explain what you're doing. Then, they give you an armband to wear and a signed release form.

So, while Doc was explaining what newspaper he works for, I started telling the translator I send my pictures to National Geograghic, JPG Magazine, Popular Science, Reader's Digest and anybody else I could think of, just so they'd give me a slip of paper like they gave Doc.

Shoot first and ask questions later doesn't work too well if you plan on making a living with your camera.

Always get a signed release !
Posted by RyukyuMike at 8:42 PM