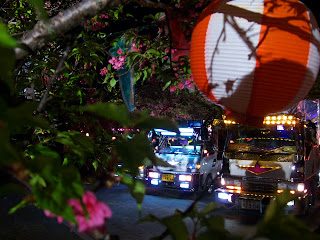 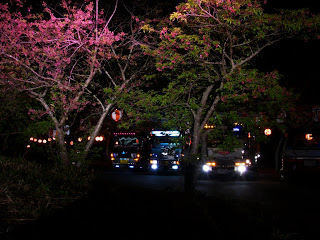 Last Saturday night while other people were doing important stuff, like drinking beer, I went to check out the Kin Cherry Blossom Festival.

Thinking it would be some big shindig like it is in all the other places on the Island, I spent all afternoon printing photos of birds and Cherry Blossoms I had shot in that location, just two weeks before. I made up all sizes of photos from 3x5 to 8x10 and even framed a batch of them in cardboard, thinking I could get rich selling them to tourists. Or, at least make enough money to reinvest in more wooden frames, for Gallery exhibits.

About an hour after the Festival started, I showed up with my camera to shoot the activities and a bag full of photos to sell. I think that's what younger folks call: multi-tasking. I parked the car a few hundred yards away from the festivities, so I wouldn't get blocked-in by traffic later and decided to leave the bag of photos in the car and stroll around with my camera awhile. Figuring maybe I'd spot a booth set up by someone I know and I could get them to sell my pictures for me ( on commission, of course).

As soon as I walked around a bend in the road and could see the festival grounds, I knew my Get Rich Quick Scheme was doomed. I knew instinctively "There aint gonna be no tourists here" Even though the red and white lanterns were stretched for a 1/4 mile on both sides of the highway and music was blaring from a stage, it was obvious this was an event for the local inhabitants only. How would I know that ? Maybe I've lived here too long !

The layout of the festival grounds consisted of:

A makeshift stage in front of a cargo-container covered by a blue plastic tarp.

All the Town Drunks were there swilling their sake and trying to get me to join them ( probably because I used to be one of them). But, the nice thing about being a cameraman, once you tell them you're working, they respect that and leave you alone.

So, I walked around a few hours shooting Cherry Blossoms in the fading light and sniffing sake fumes until my camera started beeping, telling me the battery was dead. Changed batteries and it started complaining about the memory card being full ! I asked around and found out the event was over at 8PM, so, figured I'd put a fresh card in and have 2GBs of memory to shoot the fireworks.

Well, like the rest of my plans gone wrong, there was no money for fireworks. Here it was 8PM and dark and getting cold and my stomach was growling and I waited all this time for NO FIREWORKS !

The only thing that kept me hanging around any longer was they were playing some of my favorite music: Okinawan Mineo. I milled around in the crowd for awhile and even thought of maybe having a beer. But thought twice because one beer might lead to a dozen and I had to drive.

So, I made one last walk around the festival grounds to say goodbye to some folks I hadn't seen in a few years, when all of a sudden the whole place lit-up ! A Whole bunch of Dump Trucks came with glaring lights from both ends of the road. Music blasting, polished chrome shining, smoke stacks smoking and all 3 or 4 cylinders roaring down the highway burning diesel and squeeling tires, blowing horns and showing-off their valet-like parking skills. And I loved it ! The festival didn't end at 8 or 9. I really don't know when it ended. After I ran out of memory card the second time, I had to go home before the scent of alcohol overcame me.

When you have live bands, karaoke, gaudy lit-up dump trucks, alcohol and drunks singing to them and dancing with them, WHO NEEDS FIREWORKS ?

Posted by RyukyuMike at 7:48 PM

Mike, great post. Next you need to learn how to add more photos. The write up was great, had me glued all the way through. By the way, I'm now signed up as a follower of your blog.