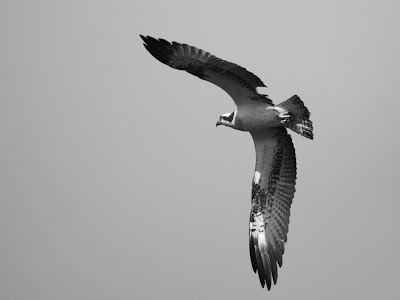 For you folks that have those old Black and White monitors on your computer, I figured I'd give you a treat; a B&W photo ! Why would a nature photographer take a beautiful picture of an Osprey with all those neat colored feathers lit-up by the early morning sun and ruin it by presenting it in Black and White ?
Because it's my picture and I can do any damn thing I want to with it ! No, really I was trying to be artistic. Yesterday was the first time in about a month I had a blast doing what I like most in life; hunting for wildlife with my camera. I was awake before 4AM, coffeed my body-up, walked my dogs, loaded-up my cameras and was out waiting for the birds to wake up before 6AM. Froze my butt off wearing my Grandpa T-shirt, shorts and flipflops but I was happy; no dogs, I snuck-outa the house before the wife woke-up, not a care in the world. Just me and my cameras; Man against the Elements !
Got 179 great photos of all kinds of birds in the wild and even shot some fish in a riverbed. All in about 4 hours. I was actually on my way home when I spotted the Osprey and then, another Osprey. I know their habits pretty well, so I had plenty of time to do manual settings on my camera. Tripod: forget it, it's a waste of time when you have to move as quick as they fly (unless you maybe have a 800mm lens and you're in a tower somewhere). Just act like you're not going to shoot him and when he gets close enough, SHOOT !
When I get home and download on the computer ( Mine has a color monitor) the first thing I do is delete any photos where I didn't catch the eyes just right, unless the critter is doing something really interesting, like reproducing or taking a nap, or, eating another critter ! Then I get rid of any photo that just isn't composed right and can't be recomposed by cropping. Then, I take my absolutely best photos and hide them in my Million Dollar Folder which I hide under my mattress. The rest I enter in contests, put on my website or post to my Blog.
Some folks think B&W is artistic, so, I thought I'd show everybody; I can be artistic, too ! The truth of the matter is I was going to throw this photo away. All the rest of yesterday's Osprey shots were taken when the bird was flying in clear blue skies. This was the only shot I had where he flew with a big grey raincloud behind him. Comments ?
Posted by RyukyuMike at 5:09 PM

Nicely composed photo for a piece of garbage destined for the recycle bin of your computer.