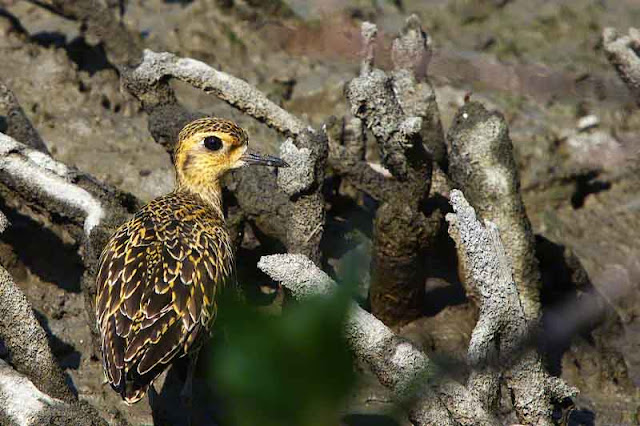 The Pacific Golden-Plover (Pluvialis fulva) is a winter visitor to Okinawa, Japan.

Their normal stomping ground is the tundra in places like Siberia and Alaska.

They eat bugs and small shellfish along the shore in shallow water.

The conservation people give this bird an LC rating in their calculations of endangered species.

LC means Least Concern.  Like, don't worry about it.

Maybe the conservation folks haven't heard about all the radioactive material and oil that's been dumped into the Pacific Ocean over the past year.

It's probably not healthy for the wildlife that has to eat food from there.

When I took the photo of this little Pacific Golden-Plover he wasn't on the Pacific side of Okinawa.

Now, I'm wondering what he was doing over on the East China Sea side of the island eating crabs in the surf.  Could he have gotten wrong directions from the visitor's center ?

Or, do you think he's, at least, a little bit concerned about the food from the Pacific Ocean ?

MORE ABOUT THE PACIFIC GOLDEN-PLOVER


YOU MAY ALSO LIKE: EARTHQUAKES, OIL SPILLS, TSUNAMIS, NUCLEAR DISASTERS AND COAL

Alison,
Cute rascals. You have anything like that in your neck of the woods?