Photo of the Week: Waterfall and the X, Ahem, Ahum, O-Files 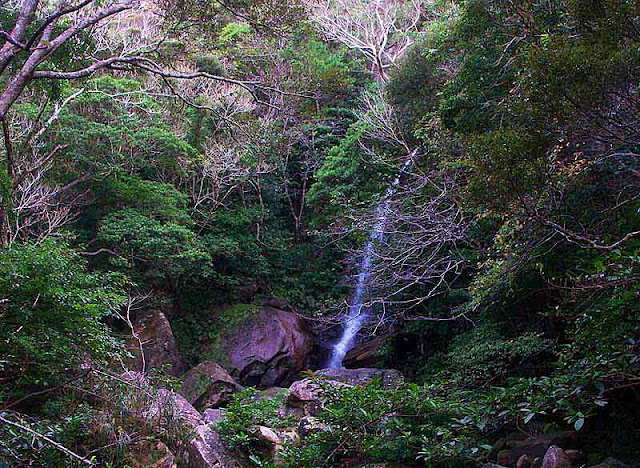 One of these days I have to go back up there and check the place out, again.

I have a couple of reasons.  Call them unsolved mysteries, if that's allowed.

RyukyuRusty thinks one of those big rocks, near the white water in the photo, is petrified wood.

Well, I think he's been watching too much TV or something.

So, we'll have to bet some beers on it and go back up there, just so I can get free beers.

Another reason I want to go climbing up that waterfall is something I saw when I was developing.

It looks like there is some kanji ( Chinese character ) engraved in one of those stones, right near the one Rusty thinks the petrified wood rests.  So, I want to take a closer look.

Lots of places we go shooting photos around the Ryukyu islands, we come across things that need further investigation.  I call them unsolved mysteries.  RyukyuRu was calling them X files.

Well, one day, goofing around online, we Googled X files.  And, we came across this article about somebody getting sued for using X files.  It had to be some sort of joke, I hope.
Like, some knucklehead lawyer is going to tell me I can't use the letter X, anymore ?

Just to be on the safe side, though, RyukyuRu started calling unsolved mysteries "The O Files".

You don't suppose the unsolved mysteries and X files people could really take me to court over using the same letters and words they did, when I write about a waterfall, do you ?

Someday, maybe someone will own the letter "O" too.  Hurry up and use them while they're free !

RyukyuRu's MAP IT OKINAWA DIRECTIONS TO THE WATERFALL

Anonymous,
Lots of people use the same name as you. Did you know that ? Sue them !

Well X Files is a show... or used to be so maybe that's why. O Files sounds more mysterious anyways haha