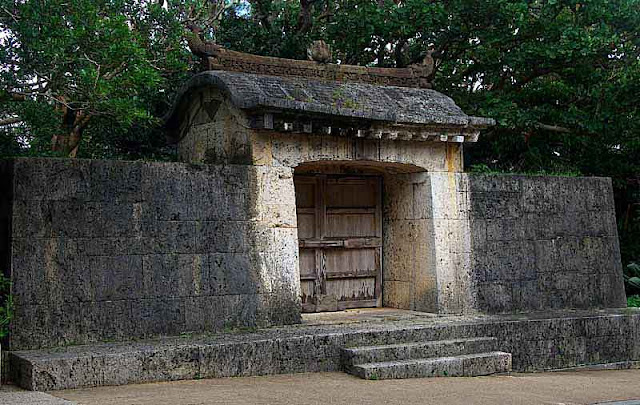 This stone gate in Okinawa, Japan was designated a UNESCO World Heritage Site in the year 2000.

Built sometime during the 16th Century, it is an architectural example of Chinese influence on the Okinawa islands during the period when Okinawa was known as the Ryukyu Kingdom.

The gate, known as Sonohyan-utaki Ishimon, guards the entranceway of a sacred grove.

It is located just across the street from Shuri Castle.

Many travelers, visiting Okinawa's UNESCO Sites pass right by this cultural asset on the way to the #1 tourist attraction on the island, without even noticing it.

The stone gate was only opened for the King of the Ryukyu Islands and royalty so they could enter the sacred grove before leaving the castle to embark upon a journey.

Here, they would pray to the gods for a safe return. If you ever travel to Okinawa to see UNESCO World Heritage Sites don't miss this one.

This stone gate could insure you safe return.

Posted by RyukyuMike at 6:14 PM

This is really cool. When we were in Tokyo, we stumbled upon a few gates but none of them looked like this one. Is it grass weave? I can't tell.

Very Nice! This is the type of place I'd love to visit in Okinawa.

Japan-Australia,
Hang-in a bit longer and I'll have all of the UNESCO spots charted for you !

It's sad that such an important site goes noticed by so many tourists. I'm a huge fan of UNESCO sites.

Muza-chan,
Bring all your Nikon cameras and lenses so, I can fire thrm. I'll even clean them for free !

Expat in Germany,
Me, too. If I can ever figure out where I put the stuff, I think I became a UNESCO member once.

Sophie,
The Chinese called this place Loo Choo, or Luu Chuu. Ryukyu, I don't think anyone has found the origins of that word. But, I'll look into it for you. OK, I'm done. SECRET !

The photo makes me want to walk through that gate and see what's on the other side!

I learn a lot reading your blog! I also love UNESCO sites and try to include them on any trip. I also like the fact that they have an Intangible Heritage Lists - and there is lots from Japan on that one.

I'm all for safe returns, so will definitely visit the Stone Gate. Interesting history.

I love gates...like windows and doors. Makes you wonder what happened inside.

Thanks for the link!

Interesting bit of history. I spent about a year and a half on Okinawa, but don't recall if I saw this particular gate.

That's one of the great thigns about Okinawa, there are amazing sites lurking all over the place. I found an ancient precusor to ohaka on my island that even locals don't know much about. Great shots!

Jackie and Joel Smith,
On the other side, the sacred grove, only certain high priestesses could enter, back in the old days, and I believe, it's still that way today.

HikeBikeTravel,
It's rewarding to hear that someone learns from my blog.Thank you.

Cathy Sweeney,
For sure, you'd enjoy taking photos of all the UNESCO Sites here. Give me a holler when you book your flight !

LadyE,
Glad you like the link. Once, I accidentally entered one of those secret sacred sites with my camera. Can't tell what happened, though.

Dick Jordan,
Don't feel badly. I bet. I missed this site dozens of times, on my way to Shuri-jo, just like most travelers do.

More Things-Japanese,
Nice to meet you and, you have a new follower, now. Let's keep in touch. I enjoyed visiting your site, as well.

Interesting to learn the history! Agree that it's sad that many people ignore this point of interest ... but this is what awesome travel bloggers are for ... to remind the world of all the amazing things there are to see.

Cherriesberries,
Thanks. You are so kind with your comments!