Friday Photos: Stained Glass in Okinawa From A Safer Angle 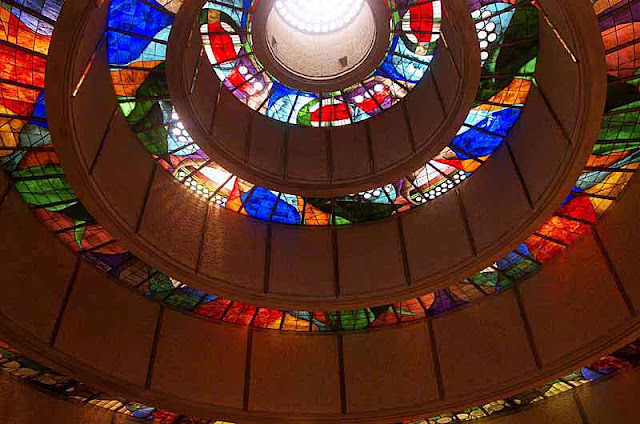 This photo was taken going in to the Okinawa International Orchid show in 2012.
The camera, a Pentax K5, was mounted on a tripod and a shutter cable release was used.
Stained glass is a great subject for photography.  I've had better shots of the stuff that went somewhere in contests but, this one I'm only using here for comparison.
This photo was taken at a safer angle than those I shot last year.
It just doesn't have the perfect lighting required to be a contest winner. 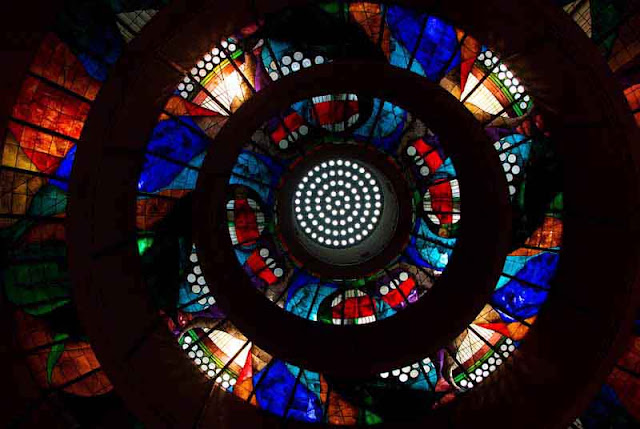 This photo taken in 2011, of the same stained glass, was made using the Pentax K10D.
It was much later in the afternoon and the light spread evenly through the scene.
This shot won't go anywhere in a contest, either.
The composition is off and, the the shot was taken in a rush, without a tripod or cable release.
So, we have one photo with lousy lighting and fairly good composition.
Then, one with good lighting and lousy composition.
Why didn't the cameraman take his time on the second shot ?
That's because, while I was lying on the floor trying to compose the shot
a busload of girls in short skirts
WALKED OVER ME !
The 2012 photo was taken from a safer angle.
Wouldn't you agree ?

Posted by RyukyuMike at 1:07 AM

Mommy Cracked,
Aw, yer too sweet. Wish ya really were my mommy !

Wonderful colors. I love stained glass. They are always so easily beautiful in photos. And you've captured them so well.

Sherry,
Thank you. There aren't many places to see stained glass around here so, I always shoot some at the orchid show while I'm visiting up there. It's the real deal not, the plastic variety many places use these days.