A Travel Photo: Whatcha Think You're Doin' Back There Mr ? 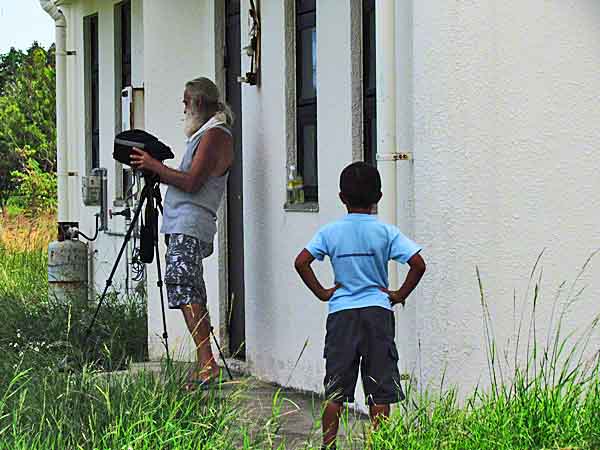 Today's Travel Photo Thursday shot was taken by RyukyuRu, unbeknownst to me.

But, I'm glad he emailed it today because it's a good example of something we forget as foreigners, sometimes, when we're out and about with our cameras.

People are watching you !

The photo was taken at an athletic field in Uruma City Okinawa, Japan.

A couple of teachers had a bunch of schoolkids out on a field trip.

They ain't exactly the kind of wildlife I was looking forward to shooting.

So, I went around behind the building where there was some shade.

There I was, facing the ocean, just getting ready to uncover my camera.

Not only was I clueless about the photo, I didn't know that kid was watching me, either.

He very well could have been saying, "Whatcha think you're doin' back there Mr ?"

Hah! At least he's facing away from the wall.

What a delightful catch! I can just hear the kid saying that.

I love how the little boy has his hand on his hips in the picture. It really speaks for itself :)

Great shot, Mike! I love the way he's standing -- like he's in charge.

It looks like you were wrapped up in the moment - in a state of flow. Sometimes that's a very good thing.

One of the things I like about using a point and shoot camera is that people tend to view you as an ordinary tourist and pay little or no attention to you as you snap away.

Easy,Vera,Sabrina,Date,Hike,Dick and Cathy,
Thanks Y'all, I'll pass on your comments to RyukyuRu and see f we can get him to join this elite group !

LadyE,
Thanks for stopping by and I'll let RyukyuRu know about your compliment.

Andi at The Particular Traveler said...

What a poignant moment, and so nice that RyukuRu captured it. :-)

Andi,
That Ryukyu guy can catch some stuff on camera. WE ougfht to see if we can find him a paying job !