Things move along quickly at some of the cultural events, I attend and it was one of those days.

One camera crashed, due to human error and, luckily, I had a backup one handy.

One of the uminchu (fisherman) said, "Mikesan come over here." 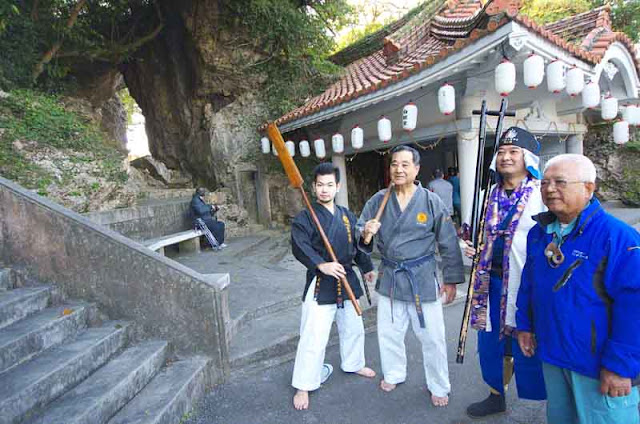 This was the first, sailing of the sabani boats, since the beginning of the Chinese New Year.

Prayers and offerings were made at the shrine and, it was time to go out to sea.

They were posed, for photos, being taken by a young lady and, I was trying to get closer.

It's really, not a good idea, for a bearded foreigner, to shove people out of the way.

For a split second, I thought maybe, these dudes, would start whacking me with their weapons.

Finally, Ken Uehara (right) told them, who I was and, what I do.

"Mikesan, gets our story in newspapers and on the internet," he told them.

So, I got out of there without a scratch and, had to hurry, on down to the ocean.

Doing stuff like this can give you goose bumps and make hairs stand up on your neck.

Maybe, they should assign a note taker/translator to me, to keep me out of trouble !

What the Heck Is a Sabani ?

From a martial arts establishment in Belgium, the friends above, were identified as:

"Yamashiro Kenichi Sensei with his son Takesi Yamasiro and his student Yuki."

Posted by RyukyuMike at 5:36 AM

I can't believe you just ran into Yamashiro sensei! This old lady trains Matayoshi kobudo...and He is the ONE person I would like to train with if I ever get to Okinawa!