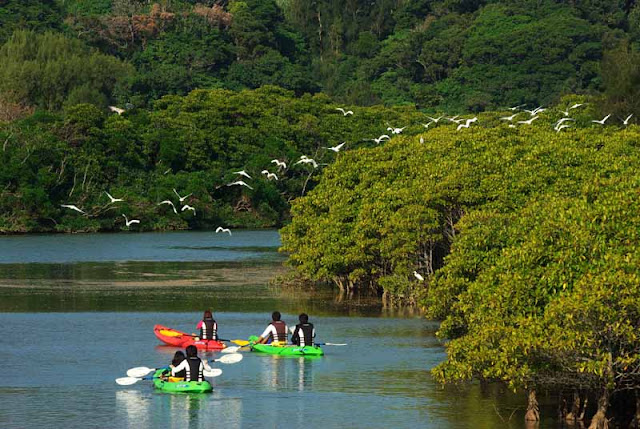 Here is a photo I had plenty of time to compose.  I was standing on the bridge crossing the Okukubi River. The kayakers, on an ecotour paddled towards me from the opposite direction.  They would pass directly under me to get to the mangroves the tour guide was taking them to see.


As they approached, I pointed at my camera and flipped them the OK sign. That's kind of my informal way of asking, "Mind if I take your picture?"  They flipped the OK sign back at me, smiled, and nodded in the affirmative.

That's great but, I didn't want photos of a buncha giggling tourists paddling boats and flipping me the peace sign so, I waited for them to pass under the bridge and start acting naturally.

Ecotourism can be a good thing, I think.  It's an industry that can educate people, bring them closer to nature and help the economy in places where there is no real economy to speak of.

Some folks in the travel industry use the buzz word "Ecotourism" to fill up their bank accounts, pollute remote corners of the earth and destroy or disturb nature and wildlife.  That's a bad thing.

The Okukubi River is in my hometown Kin Cho Kin Okinawa, Japan.  You can get a free tour of the area. I'll take you there. We can stand on the bridge exactly where I was when I took this photo and shoot some more.  All I ask in return is a small favor.

If we see any Ecotourists acting irresponsibly would you mind helping me flip them some birds ?

I'll help you out Mike, I love flipping birds.

Ryan,
OK but, ya gotta be careful no cussin' and be vewy, vewy quiet.
It's the year of the wabbit !

Cathy,
Thank you for visiting and taking the time to make your kind comments. Sometimes, it's a grind for me doing a post daily and it's always worthwhile when even just one person drops in to say "Hi".

Love this shot Mike. Thanks so much for posting to Travel Photo Thursday.

LadyE,
As long as you give me a weekly reminder, every week with a Thursday coming up, I'll keep digging something out of my files for you. Sometimes the weeks go by so fast over here I think we skip Thursdays and just make longer weekends!