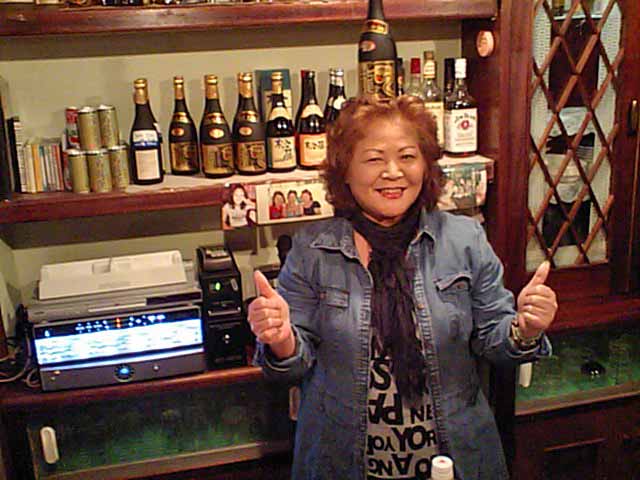 Angry Queen Bee was converted to DANCING QUEEN  by doing a Throne Makeover. This Photo Essay will give you instructions on how to replace a broken, cracked, faded or warped toilet seat lid. This Do It Yourself (DIY) can be done without you having to look at Joe the plumber or any of his friends. Most countries have no license requirements for Throne Makeovers so, you shoudn't need to run down to the city office and buy a building permit.

HERE'S HOW I GOT STARTED IN THIS BUSINESS:

About two weeks ago, this guy walks into the bar and says "Hey, Mike, can you use a brand new toilet seat"?

He had liberated a brand new toilet seat from somewhere, for whatever reason and I guess he was cleaning out his garage to make room for more treasures.
Or, it could have been his Queen Bee thought it was kind of a tacky thing to use as a frame for their wedding pictures and told him to get rid of it.  You know how women are about stuff like that.

Anyway, I'm lookin' at the guy like he's high on something. What? Why?  "No, I don't need any toilet seats today. Now do you need a beer or something"?
"Nope, he says.  I just thought maybe you needed it. Its practically brand new.  I can't stay and have a beer. I'm walking my dog and left her hitched-up outside."

Well, my Queen Bee had heard the conversation.  Just as the guy turns to go back out the door she says, "Yes, we need a toilet seat in the lady's room."  You know how women know stuff like that.

Ten minutes doesn't go by and I have a brand new toilet seat delivered to the bar. Groan. Some unknown force had cracked the front edge of the throne so, the Queen used duct tape or double-sided carpet tape, whatever, to repair it.  How long has it been that way?  It may have been a few weeks, months, or even years. I haven't had any reason to use the Lady's crapper and nobody ever complained to me about it being broken.

In the Okinawan culture duct tape fixes everything. Leaky pipes, electrical shorts, screen doors and autobody parts with holes poked in them, leaky roofs, runs in nylons, antenna and satellite dishes and broken windows or bones, whatever needs fixin' an Okinawan can handle it, just give them a roll of tape and get out of the way. It'll get fixed.

When the new throne seat showed up, the Queen proudly displayed it behind the bar.  I told her to put the thing away somewhere and I'd fix the crapper, sometime when the bar was closed.

So, she stuffed it in a cabinet behind the bar and I forgot about it until last week.

The landlord came in one night. He was all dressed up in a suit, pleasantly inebriated, smiling, singing and buying everybody drinks. In the past ten years, I don't think I've ever seen him that happy.  It was all good.  Everyone was having fun until the broken throne seat came up again.

The wife starts telling the landlord he has to fix the toilet in the lady's room. I wouldn't even have known what the conversation was about if I hadn't seen the Queen reach down and pull the new throne seat out of the cabinet to show the landlord.

And, you should've seen the frown on the poor guy's face as he's asking, "What's wrong with the women's toilet seat that's in there now"?

The wife goes on about where the thing is cracked. She mimicks a knucklehead wrapping tape around the lip of the throne.  Then, starts goin off about how lady customers complain that their fur gets caught on the tape.

The Archie Bunker Syndrome kicked in.  Somehow, I had to get her to Stifle herself .

So, I told the Queen Bee, "Please, leave the poor guy alone.  I'll fix the throne in the lady's room.  Leave the new crapper lid out where everbody can see it.  Leave it where I'll trip over it, if you want to.  I'll fix the thing first thing in the morning.  I really don't think the landlord needs to hear any more about people's fur getting stuck on the tape you wrapped around the lady's throne"! 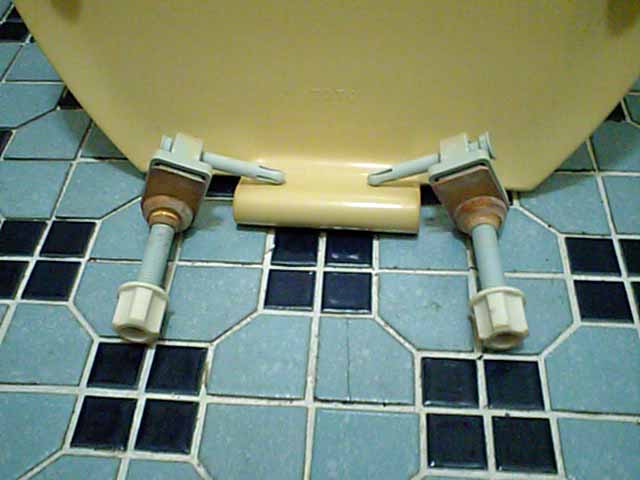 Displayed above, to give you an idea what the mechanical parts of the contraption look like,  are the two nuts and bolts you will have to conquer. One for the left side and the other for the right side of the throne. The top of the bolts may be tackled with a wrench or a screwdriver, depending upon the where they were made. Mine had slots for a screwdriver. The plastic nuts on the bottom, I was able to twist on and off by hand; no tools required.

But, if you have a real antique throne, you may run across all metal components.  That would require some wrenches and, maybe some penetrating oil. 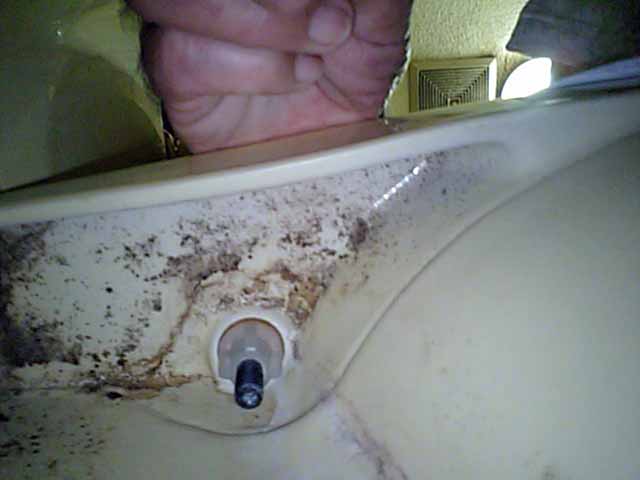 Only a true commode hugger who just woke up, or plumber lying on his back would recognize this photo. I shot this with my cell phone just to give you an idea what it looks like under there.
There's really no need to lay down on the floor now that you've seen this. The nut is twisted up on to the bolt. The bolt was inserted through the china portion of the bowl from up above.

So, all you have to do is squat or kneel in front of the throne and reach up to find the nut and bolt. Twist the nut counterclockwise to remove it.  Twist it clockwise to tighten it up. Some people remember the expression "Righty Tighty, Lefty Lucy (loose)".

If this instruction is too confusing, just practice watching the way the nuts and bolts screw on and off the new throne lid you bought and, soon enough, you'll be able to do it blindfolded ! 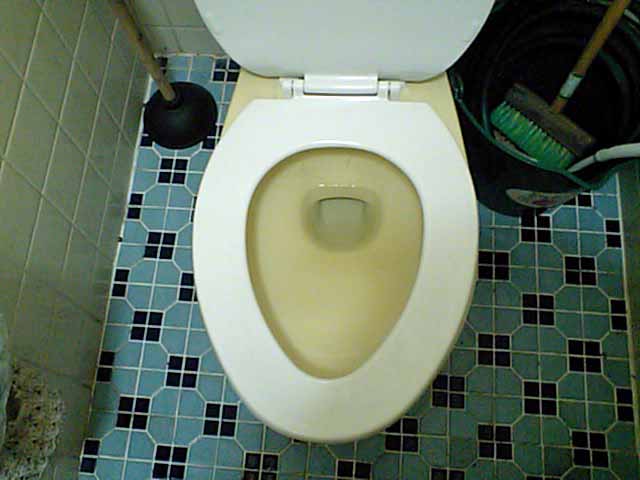 The colors don't match.  Hey, did I say I was an interior decorator ?  Total Cost: FREE ! 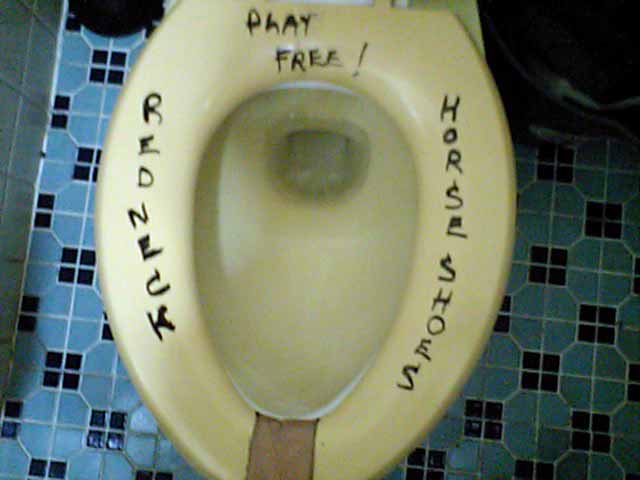 Pretty much a supporter of all things green, I didn't want to see anything winding up in the landfill so, I saved all the old hardware and the lid from the queen's broken throne; never know when they might come in handy.

Then, I took a marking pen and wrote some words on the old, cracked throne seat. It was payday for all the Americans from the base nearby.  I waited until it started getting dark outside.  Then, I walked across the street and hung it on a fencepost where the lights from an American-style bar shined on it.

When I came back in this morning, I saw,  SOME REDNECK STOLE THE DANG THING !

The way I look at it, things turned out pretty good last night. My Throne Makeover got the Angry Queen Bee off the landlord's back, plus a whole swarm of queens and a few princesses showed up singing and drinking until the wee hours of the morning.

When my Dancing Queen gets in just the right mood, she puts a full bottle of sake on her head and can do some kinda Okinawan boot scootin boogie without spillin a drop.

I guess I should do DIY stuff around this place a little more often.

That's perhaps way more than I needed to know... but I'm glad, somewhere out there in the blogosphere (or should that be bogosphere), that information has been released to float free.

Actually, we're looking at replacing ours - so I might be back for a re-read sooner than I thought. I actually like to see these different sort posts. You just never known how they might connect with people.

In this case, I'm glad you didn't provide photo evidence of that connection.

Ben,
Well, I was asked te do some technical writing and get paid for it so,figured I'd test my skills out here.
It would be interesting to know if this was helpful to anyone in need of such repairs.
When I used to teach evening courses at a community college I noticed it was lots easier for students to stay awake and pay attention if I threw some extras in to perk their ears up. Sometimes it'd be a shock factor, other times a bit of humor, just a small dose of whatever it takes to make a dry subject come to life.
If and when you get around to working on the loo give a holler back at me if any of this post stuck in your mind. I value the opinions of readers and use their feedback to tweak my writing style.

Mike Mike Mike no! now that you've done a wee DIY job in the craphouse, Queen Bee's going to have you doing every last crap filled job around the place forever!! Shoulda played dumb.

Can't resist a "guy walks into a bar" story, but this was not what I expected. It's the best toilet makeover post I've read in a long time.
Jason

Jason,
LOL, I thought of the same thing reviewing for my 75 typos per page just before posting. The good old standard "Guy walks into a bar", maybe with a monkey, parrot, or whatver and asks the bartender....

But, I got thinking, he really didn't walk in with a toilet seat on his shoulder. I don't want to be a fiction writer so, I figured I'd just tell it the way it really happened !

Ryan,
Not to worry. I've a bit of experience in these matters and papers (divorce decrees) to prove it.

The trick is not to play dumb, just let the wife think she's smarter.

Then, do like I do. Get yerself a bar and make it yer home away from home. I'm always here. It's called wife-avoidance.

Okay, just a tad too much information here Mike. However, it's nice to know that your female customer are no longer getting tangled in the toilet seat, and if I ever need to replace one (I hope not!) I have bookmarked this for future reference (actually that's a big lie, but I thought it sounded good) :):)

LadyE,
Well, I realize it was a lot more information than most folks needed but, I bet they remember where to go if they ever need to do this type of repair.
I could have titled it "A Day in the Life of A Fur Trapper" but, didn't want PETA jumping all over me !