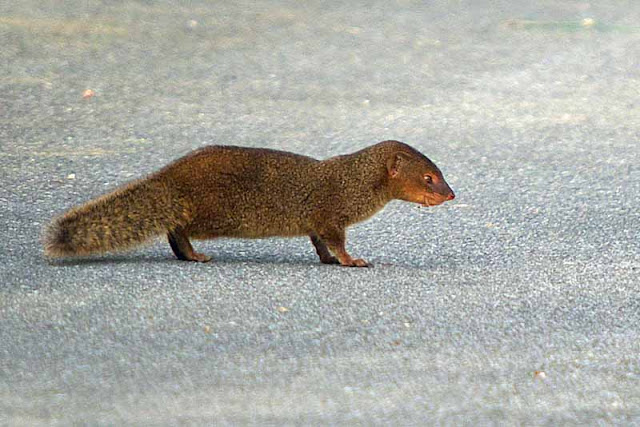 A classic example of man fooling with nature and regretting it, the Mongoose (Herpestes javanicus) was brought to Okinawa from India in the 1900s to control the poisonous snakes, Habu.

A mongoose will kill a habu, no doubt about it. I've seen it with my own eyes, even seen them kill larger snakes, like cobras. The shows that used to be put on for tourists to watch the event in a controlled environment have been banned but, you can still go some places and catch it on video.

As you can see from my photo, these little weasel-looking guys hang around in broad daylight. The snakes they were brought here to eliminate are nocturnal dudes, wouldn't you know.

So, instead of eliminating the snakes our little mongoose friends eat frogs and birds and their eggs. I hear Hawaii has the same sort of problem. A moongoose will pull raids on a chickencoop.

We have mongooses (mongeese, if you prefer) eating endangered species and the knuckleheads  who came up with this brainstorm are calling the mongoose an invasive species. Hah !

Now these poor critters got a bad reputation. They even have a bounty on them like they're some sort of criminals. BRING THEM IN DEAD OR ALIVE. LET'S STRING THEM UP !

Has it ever occurred to you, maybe the dingbat humans who snatch a critter out of his wildlife environment and stick him where he ain't supposed to be, might be the invasive species ?

The people who came up with the idea of bringing the mongoose (Herpestes javanicus) to Okinawa to eat snakes are the real VARMINTS, HERE. LET'S GO AFTER THEM !

We won't string them up and we don't want them dead. Bring them here ALIVE AND MAKE THEM ROUND UP THE INVASIVE SPECIES AND TAKE THEM BACK WHERE THEY CAME FROM !

I hear you Mike. Lots of animals that are removed from their home habitats eventually become "pests" in their new environment.

Wouldn't it be nice if we could teach the floks who make these mistakes to correct them, though?

This type of quick, little thought out reaction has caused so much harm throughout the entire world. I recently watched a discovery special on an invasive frog in Australia that was brought in for similar reasons. And it is causing havoc today.

Jason,
Someone could probably write a book on the subject. It has more than likely happened in many countries around the globe.

Ah, the mongooses. The Brits found them in India and had the same swell idea to send them out to the sugar colonies in the West Indies to eat snakes. End result? We have no clue what sorts of birds have gone extinct because the mongoose finds eggs and chicks a lot easier to hunt than snakes.

Got chicken farmers stringing up dead ones as warnings to others; mind you, one crossing the road in front you is considered good luck. There pretty interesting pets too, if you're into ferrets and the like.

The worst part of all this? A lot of the snakes were non-venomous and harmless, eating the rats that plagued the sugar crops...

Anonymous,
That's the problem here, too. The venomous snakes the mongoose was supposed to eliminate are noctural, while the mongoose is active during daylight. So, it kills endangered birds young or, eats their eggs !

We have a mongoose that visits our yard daily. I call him Ranger. He kills the doves that hang around my mulch pile.

EP,
Ranger sounds like he may be helping wherever you're at so, let us know if he needs any help. We coulod send you a bunch of them !