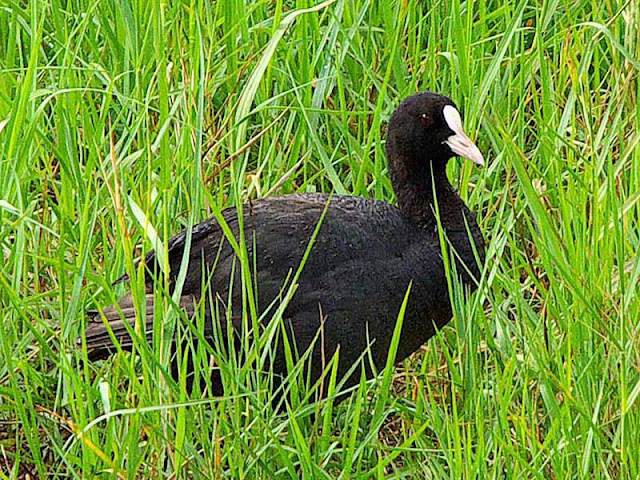 The Coot pictured here has also been called a Common Coot or Eurasian Coot (Fulica atra) and is another migratory visitor to Okinawa, Japan during the winter months. These birds aren't found in salt water. They live fresh near fresh water sources like ponds, reservoirs and lakes.Their diet, when in the water could be anything live that's small enough to catch and swallow. They eat algae and plants and may even gobble down another bird's eggs. On shore, in marshlands, seeds and fruits round off their diet.

These Coots got their name in the Oxford English Dictionary way back in 1430.  That's because of the white patch that stands out on their head reminded somebody of a guy going bald. So, I learned something new today at http://en.wikipedia.org/wiki/Eurasian_Coot.  The Brits coined the phrase "as bald as a coot" before the American English Dictionary was ever invented.

Now, I was gonna do some more research on American Coots but, internet service is a little shaky today.  It seems to me American, Australian, Eurasian and Common Coots all look and act pretty much the same.  And depending on which authorities you want to believe, these guys have been spotted visiting some countries that aren't exactly in their normal migration patterns. Like, some American Coots went to places in Europe and Tasmania couple of times. I wonder what they were smoking?  Not the birds, I mean the birdwatchers.

This whole Coot business has me confused. I'll have to dig deeper when the WWW is cooperating.  It sure looks to me like Fulica atra (Eurasian Coot) and Fulica americana (American Coot) could be the same bird and there's just a buncha sore looser scientists still fighting that war America and England had a couple of centuries ago. I don't see the Australians claiming their Coots are Fulica australianas.

What research I did get done gave me an idea though. I bet nobody ever thought of opening a bar and grill, having all the staff wear black T-shirts and long-billed, white baseball caps and naming the place KOOTERS !

THE PHOTO OF THE DAY

One old Coot to another LOL they seem to get around to a lot of Places like some other Old Coot I know . Great posting Mike.

Gene,
Thanks. I got some mail from somebody this morning giving me better links on coots. Haven't had time to check them , yet but, I bet after I do I'll be an old coot expert !

We certainly have our own unique coots over here in Oz. Unfortunately, most of them don't fly.