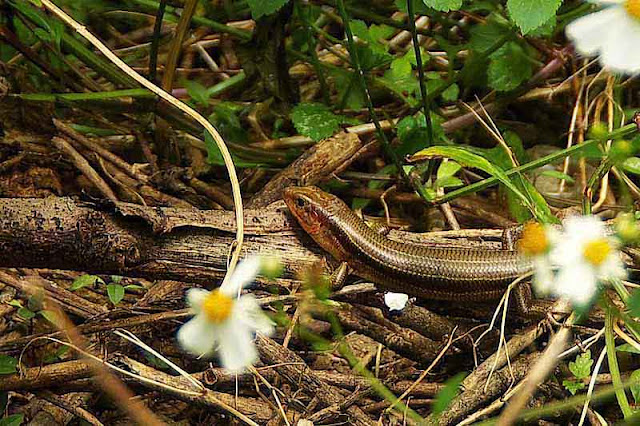 This photo of a Ryukyu Short-legged Skink (Ateuchosarus pellopleurus) was taken April 10, 2012.

It's been over two months since the day I captured the shot of the critter on Ikei Island.

That happens to be one of Okinawa's outlying islands that you can get to by car.

Getting a picture of a lizard running around in the wild is one thing; that's the fun part.

Trying to find a common and scientific name for the critter is something else.

Some of the wildlife photos I manage to capture are critters seen only on the Ryukyu Islands.

There aren't many reliable, English-language sites to go to for the research.

Being 99% certain that the above photo is a Ryukyu Short-legged Skink,

that's what I'm naming this guy, for now.  Correct me if I'm wrong.

Posted by RyukyuMike at 2:21 AM

LOL, I thought maybe you had some old childhood pictures of Madonna or Lady Gaga back when they were just short legged SKANKS!!!

Doc,
What a gentleman you've turned out to be !