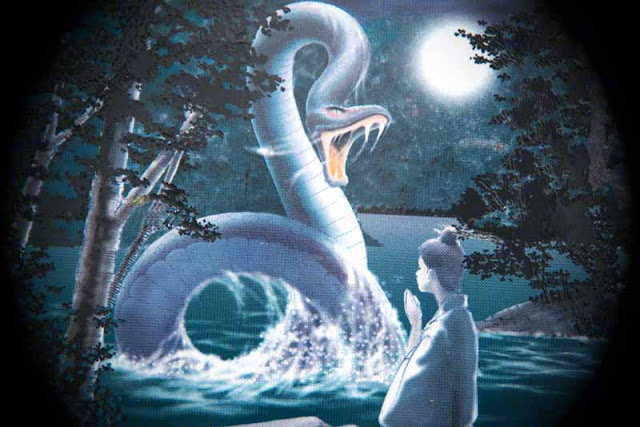 Over 700 years ago an enormous, dragon-like serpent lived in Yara Muruchi Pond.

It was believed cycles of 7 months drought and 7 months of storms were caused by this monster.

The severe weather caused economic losses for the fisherman and farmers of the island.

The elderly woman, he talked to, was a person with extraordinary psychic powers.

She claimed, a 20 year old virgin girl, must be sacrificed to appease this demon of a dragon.

Then, farmers and fishermen, would have fair weather and the economic situation would improve.

The yuta told the king to have an altar and an incense burner built, overlooking the pond.

She would officiate (in private) rituals to placate the monster, serpent.

King Gihon, was already unpopular with the islanders because of economic losses.

Now, he had to devise a way to get someone's young daughter for a sacrifice.

Who Wants to Be a Millionaire ?

The king devised a plan, that would lessen his guilt in dealing with the wicked soothsayer.

He would insure, that no men would have to take part in the old woman's demonic rituals.

Couriers were dispatched throughout the kingdom, delivering messages to each village.

The family, willing to sacrifice a maiden, would live as royalty, the rest of their lives.

One attractive young maiden stunned her family, volunteering to offer herself.

She would give her life in order to benefit family, community and country.

It may have driven her parents to madness but, it would end everyone's misery.

In a private meeting with the yuta, the girl was questioned extensively by the old woman.

From this conference, the shaman decided, when the sacrifice would take place.

It would be on the night of the full moon, during the sixth month, by the Lunar calendar.

Nervously the girl asked, “Will I be ravished, eaten alive or, both?”

The elder replied, “That is something, only the gods in heaven know.”

She was told to return on the appointed day before sunset, wearing her finest clothes. 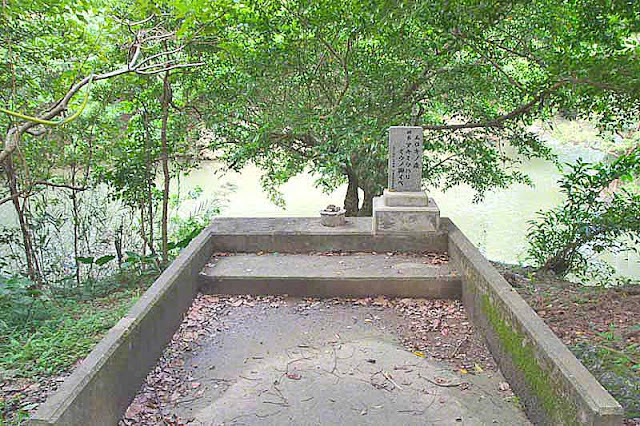 An hour before the sun went down the maiden arrived at Yara Muruchi.

She was met by the yuta, carrying a wicker basket, on the road above the pond.

The priestess assured the girl, no other villagers would witness the event.

It was a hot and humid summer night. Slowly they walked down the forest trail.

Their sandals stirred up scents of decaying leaves and, the buzzing of mosquitoes.

Nearing the pond, the priestess stopped, placing her basket on the ground.

She instructed the girl, to remove her undergarments fold them and put them on the altar.

Apprehensive as she was, she did as she was told.

No one disobeys or, questions a Ryukyu yuta.

The shaman brought her ritual container to the altar and placed some burning incense.

She sprinkled flower petals and liquid scents on the offerings and clapped her hands twice.

She ordered the girl, to walk near the water's to edge where she should stand and pray.

The yuta began muttering and praying, in some unintelligible language.

The water rippling in the pond, suddenly raged and roared, as the monster appeared.

High above the pond, it hissed and stared down at the girl.

The sound of her knees knocking, drowned out the noises forest insects had been making.

Then it happened. An angry god, tossed a golden sphere.

It hit the serpent in the head and exploded. The monster disappeared, never to be seen again.

The virgin was spared. She would become the bride of a royal prince.

Her family was invited to live in the castle and cared for, the remainder of their lives.

Periods of drought and floods ended and, the islands prospered once more.

Every year, on the 15th day of the 6th month, by the Chinese calendar a ritual takes place.