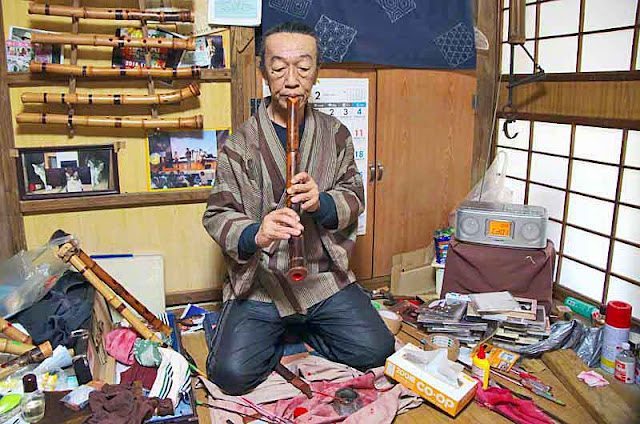 The mission was to photograph cherry blossoms on Mt. Yae in Motobu, Okinawa.

Sakura blossom season was kind of disappointing this year. Scattered blossoms, I'd say.

Doc and I had our fill of flowers and the mountain.  We decided to move along.

Coming down the hill, we spotted a sign with some Japanese writing on it and investigated.

It had romaji lettering, too. Said, "Shaku Hachi" after I moved another sign out of the way.

It reminded me of an alley, back in the 60's. It was located down south on this island.

Joking with Doc, I said, "That has something to do, with ladies of the night."

Along Came This Gentleman

Maybe, he was wondering what two foreigners were doing, poking around those signs.

He spoke less English than, we do Japanese but, we wound up getting along just fine.

Next thing you know, he invited us into his house, for some coffee and entertainment.

See, I call this an impromptu portrait because, it wasn't actually planned.

Touji, cranked up the CD player and played some tunes on that bamboo flute.

His woman, served us hot coffee and brought out some munchies for us.

In between tunes, we got some history on these flutes called Shakuhachi.

They've been used as musical instruments for over 900 years, in Japan.

The music was soft and relaxing. He told us why. It's good for meditation. A Buddhist thing.

After awhile, I wasn't so relaxed and started wondering. I do that sometimes.

Leaning over to Doc I whispered, "Wonder how much we'll have to pay, when this is over?"

Everything Turned Out Alright

On a  break, we learned, Touji wasn't an Okinawan. He came from mainland Japan.

He showed us CD's and posters, with him accompanying musicians at concerts.

For whatever reason, he decided to live in the hills of Okinawa, about 7 years ago.

I asked if, it would be alright to take some photos of him playing the flute and he gave the OK.

Then, next time he took a break, I asked if, he'd sign a model release. Good to go !

An A4 size photo was printed, for him today and, I'll head back to present it to him.

The photo probably, won't get sold for publication. Look at the distractions.

An Idea Popped into My Head

With some serious, time consuming photo editing, distractions could be removed.

But, to me, this image is a gem, just the way I photographed it. It has character.

Google "Einstein's Office Photos" and take a good look at them.

Guess what I'm going to do, the next time the missus, tells me my office is a mess ?

Tell her this is the way to get some serious meditating done. I learned in the mountains.

Posted by RyukyuMike at 4:56 PM