15 Images from an Okinawa Island Hop 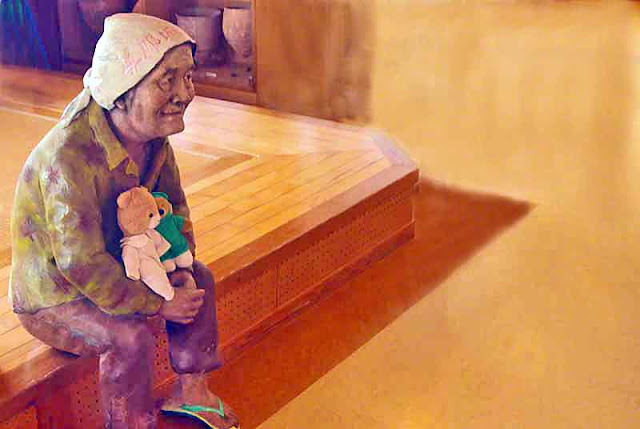 Not for the Faint Hearted

Some people call me Mick because, my real name is too long and, another Mick was with me.

He's visiting Okinawa, from Montana USA and, I won't use his real name, either.

Friends, call him Mick.  Two Micks, went out with cameras yesterday. Me and the other Mick. 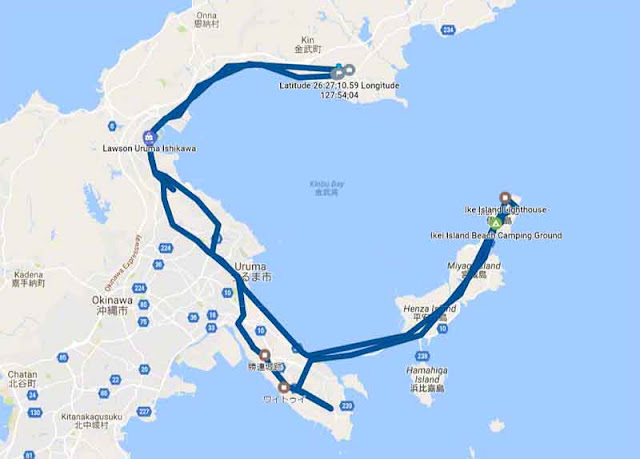 This neat map was provided by Google Maps. It shows everywhere we went.

If, you're wondering why, we backtracked a few times, I can explain.

The other Mick was driving. We were both born, last century so, we get lost sometimes.

When old guys get talking, the car, doesn't always pay attention, to where we planned on going.

Don't laugh. If you're lucky enough, someday, you'll get old too. 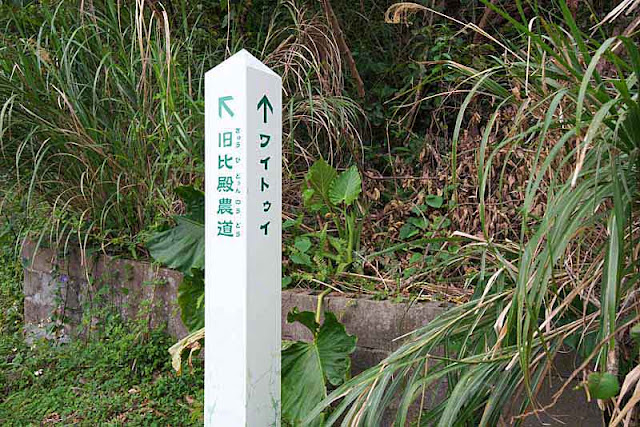 The three dolls, in the top photo, was the only indoors photo, I'll be showing.

Outdoors, was where we wanted to be and, there would be some hiking involved.

Our first stop, was near this road marker. It's pointing out Waitui, a historical site. 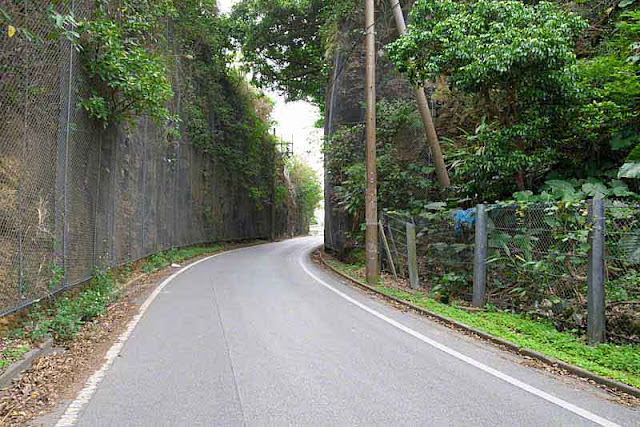 Way back, early in the 20th century, this passageway was created by farmers.

They didn't like climbing over the top of the hill, to get to the other side after, harvesting crops. 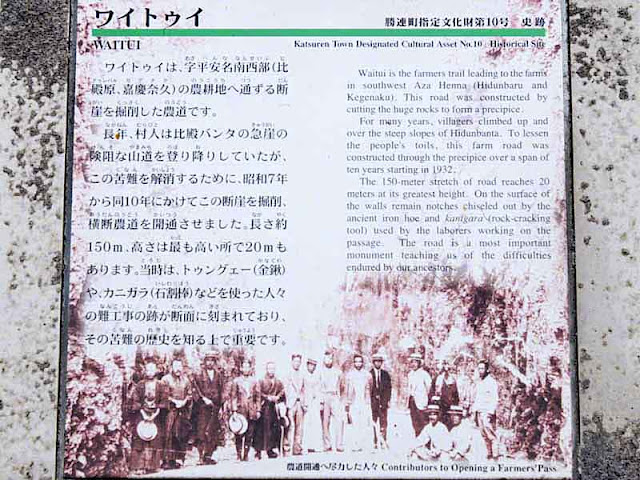 This sign, gives some of the history, in Japanese and English, for travelers to read.

The road was dug through the rocks, with hand tools and, it's 150 meters long. 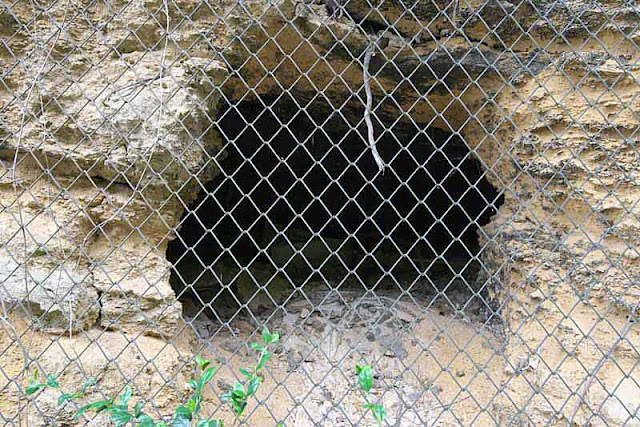 We walked back and forth, through the passage, examining the structural wonder.

And, got wondering, what these little cave-like digs, in the walls, could have been used for.

Maybe, it was places for the workers, to stash their drinks or lunch.

Er, maybe whenever somebody dropped dead from exhaustion, they got stuffed in there ! 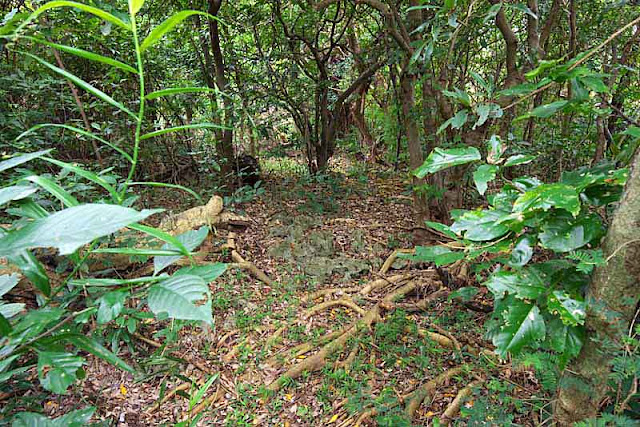 To complete our visit, to the site, we climbed over the old trail and saw what was up there.

Lots of gravesites were alongside the path, going over the top of the hill. 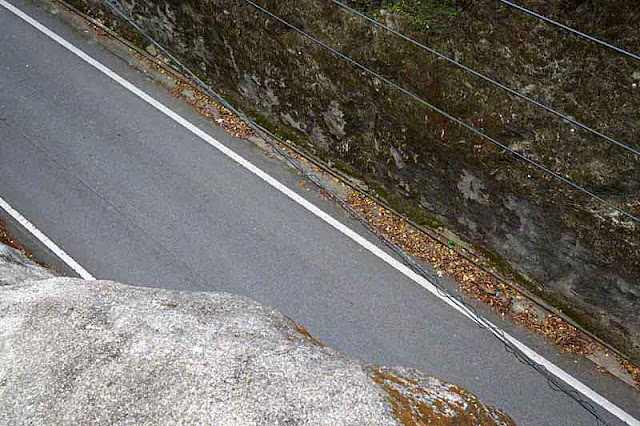 It would have been much easier if, we had hired a drone, to go up there.

Just because, I wanted to look down at the road, I figured, "Might as well take a picture."

If you had to pull a wagon or, drive an old car, you'd never make it on that trail. 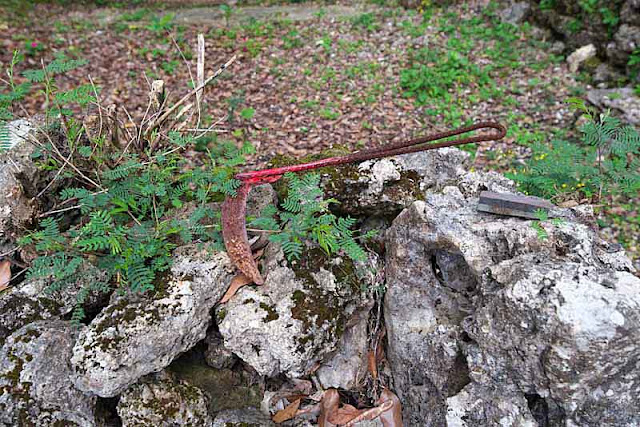 Working my way back down to street level, I noticed this red kama, resting on some rocks.

It's a farmer's hand tool that, could be used by karate dudes, as well.

They usually have wooden handles. I've never seen one like this before.

Off to Outer Islands

Thanks to modern engineering, some of the other Ryukyu islands can be reached by car.

We decided to visit Miyagi and Ikei islands and, hopped into Mick's rental car.

As we were driving along, talking about kids and dogs, something occurred to us.

Don't let those rental machines do the driving. They don't pay attention.

Next thing you know, we were going in the wrong direction. That's alright; we turned it around. 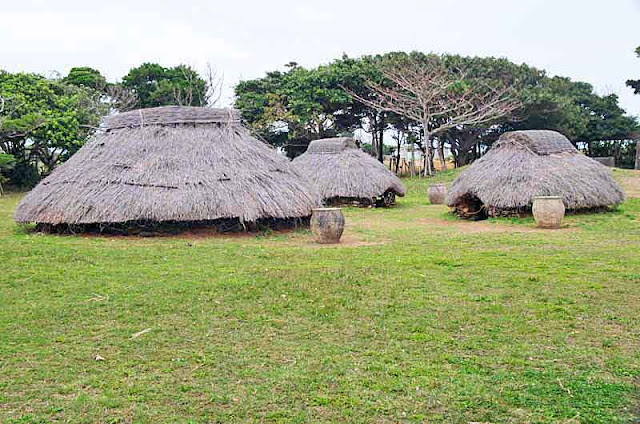 One of the things I love about island life is, you never get lost for long.

Sooner or later, ocean appears. Then, you just decide whether to turn left or right.

Before long, we arrived at this archaeological site, Nakabaru Ruins. 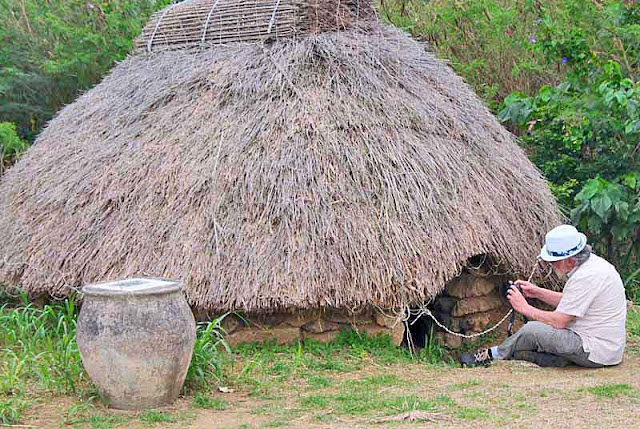 Sneaking shots of the other Mick was easy because, he got involved, taking pictures.

Those straw-roofed shacks were where families lived, years ago before electricity came along.

Can you imagine, how kids would whine, these days if, they had to live like that ?

However, you couldn't yell, "Go to your room" like people do nowadays, either.

Well, I thought about it for a minute. Now, I know why men, were the hunters and fishermen !

My friend, Mick only gets to visit Okinawa for a few weeks, every few years.

So, I thought it would be nice, to give him a few photos of his travels, for when he gets home.

I really hope his wife, doesn't think he's, chasing after that young farm gal on the tractor.

I bet if we held our fingers up, we're all about the same age. Hah !

Time to Do Some Hill Climbing Again

It was an iffy sort of day; overcast with a few sprinkles of rain but, I had to show Mick.

There are places in the Ryukyu islands, that many people, never heard of or, have seen.

Directly across the road from Ikei Beach, is the island's Gusuku (castle) Ruins.

Fortunately, the wife presented me, with some brand new flip-flops, that morning.

Without that handrail, the muddy trail, could send you down to the ocean.

The other Mick, had shoes for traction. My shima zori (flip-flops) were a bit slippery.

We went huffing and puffing, all the way to the top. But, I didn't take any photos from there.

The skyline, wasn't right and, I don't bother photographing stuff, I don't want to keep. 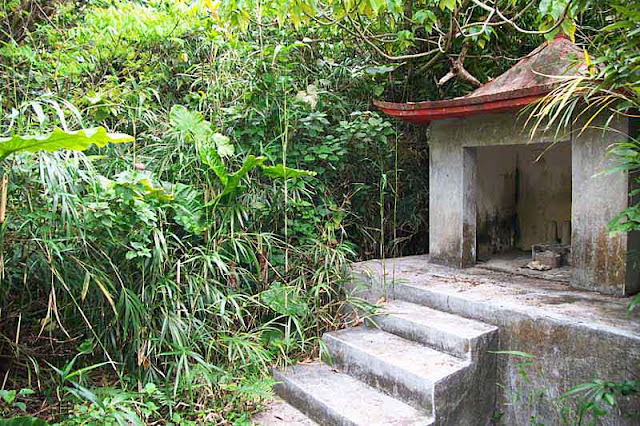 There's an interesting utaki (sacred site) near the top of the castle ruins.

It's a place where, the high priestess would have prayed, back in the Ryukyu Kingdom days.

If, you see see signs of burnt incense and coins, somebody has been there, praying.

At the Top of This Gusuku

Looking around, the sky wasn't favorable for photography, at this time.  Oh well. 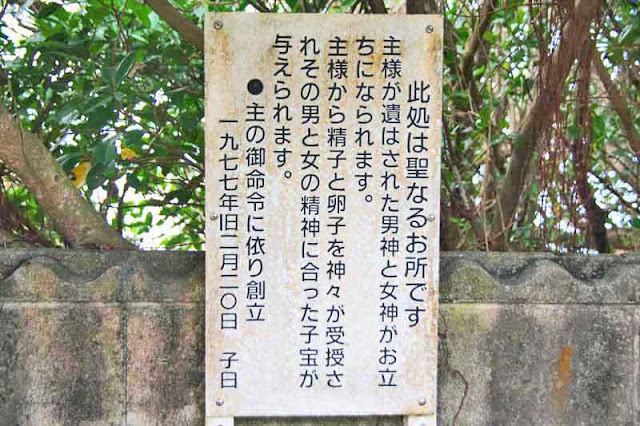 There must be, something interesting to take a photo of, after all that climbing.

Using the iPhone, I got the Google Translate camera turned on, for this sign.

A little trick, I use: Email the translation to yourself, for further reference.

After a bit of tweaking and verification, it says, something like this:

"It is a holy place. Here is the god and goddess where the owner was made a saint.

matches the spirit of that man and woman."

CORRECTION: Above image was taken at another location. My apologies.

On the northern end of Ikei Island there is a lighthouse. This site is in the same area.

As you near the lighthouse, checkout the small trail, going right.

A bronzed statue and this Japanese sign are along the cliffs there.

The little bit of Mick, in me, says it's time to get out of this office and, put on the tux.

Maybe, I'll be back again Sunday.

Posted by RyukyuMike at 7:29 PM