Dancing Ladies and Dancing Lion-Dogs: My Halloween in Photos

Halloween isn't really observed where I live, in Okinawa, Japan but I was pretty busy from morning until late at night watching people in costumes. Here are a few of the several hundred photos I took at the two Festivals I attended yesterday. It was a full twenty hour day of shooting Dancing Ladies and Dancing Lion-dogs. 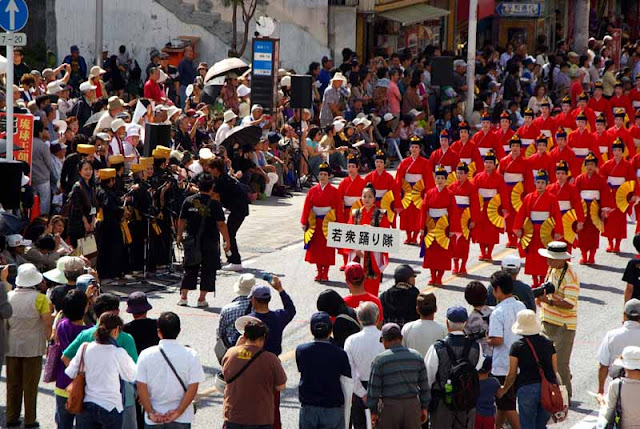 The day started with a parade on the International Avenue (Kokusaidori) in Naha Okinawa, Japan.
Here's a frazallion  (Isn't that a number?) ladies in red coming down the street. 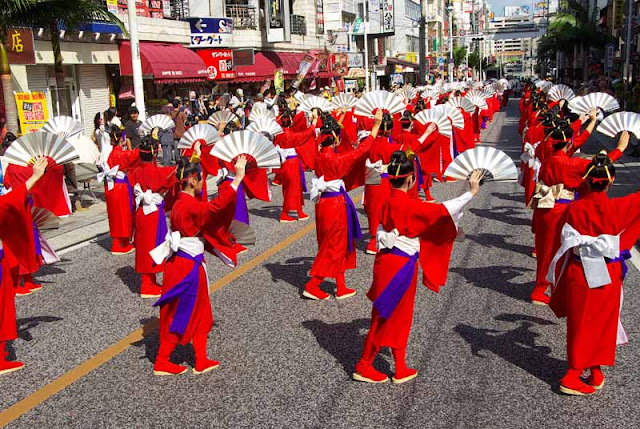 They danced in the street and waved their fans. The fans are silver on one side..... 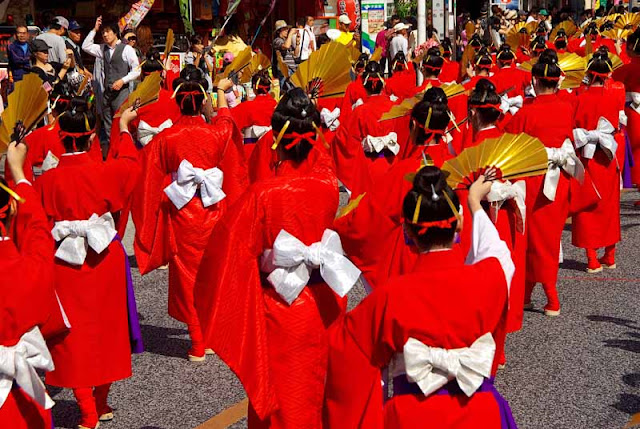 After I captured enough photos of Dancing Ladies in the streets of the big city to last me a week, I headed back to the northern part of the island to get ready for my night shoot. I downloaded the camera and recharged for a country festival in a town close to home, Yaka Okinawa. I enjoy these festivals much more than those in big cities, mostly because they don't have frazallions of people hanging around and popping up into the frame of your picture everytime you think you're ready to shoot. 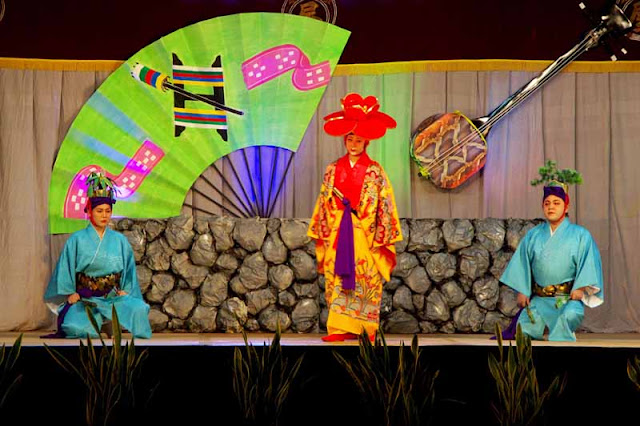 There's a few hundred more various Dancing Lady and Lion-Dog photos I'll be cooking for awhile but, for now, these are two of my favorites I'm putting on display.

In the above photo, the gal on the right has a pine tree in her hair, the gal on the left has bamboo (not a pineapple plant) decorating her brain, and the gal with the big sombrero-lookin' thing, well that's a plum flower.

I hope I got it right, this time, because my Okinawa Dance Sensei will put me on detention if I get caught lying again. 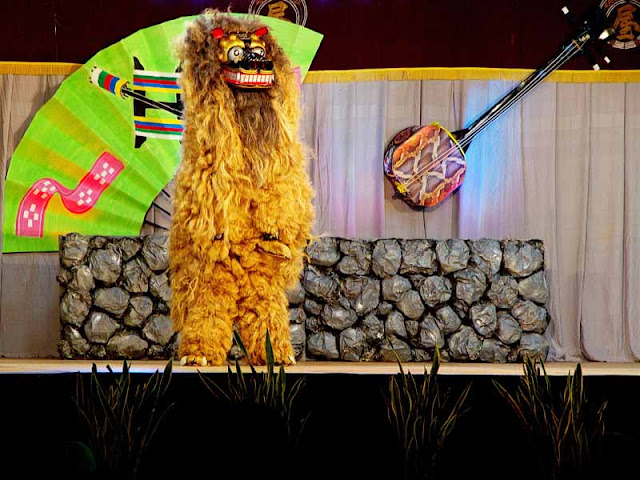 Now, the Shishimai (Dancing Lion-Dog) has to be the highlight of my whole day. I'll do an entire article on these characters one of these days. They are really something to see in action and it's pretty unusual to catch a shot like this where the critter holds still for a tenth of a second so you can snap a shot in low lighting.

So, in a nutshell, that's how I spent my Halloween, shooting Dancing Ladies and Lion-Dogs.  How was your Halloween, any better?

Posted by RyukyuMike at 4:39 AM

hahaha! kind of like our Halloween, except we had the aftermath of a typhoon to deal with.
We went to the annual Kikusui festival. Of course photographed and video'd the thing, too. And almost got ran over by an agitated horse in the process.

A and Y,
Glad you stopped by and commented. Also, it's nice to hear someone else, besides me was out Festival-hopping in the land where Halloween doesn't really exist !

very impressive and incredible pictures !
Halloween in Belgium does not really exists.

Freya,
Thank you ! Now , that was news to me. Belgium doesn't have Halloween? I thought it was popular throughout Europe. Hmm, maybe a good blog topic for next year- "Places that do and don't have Hallowen".

I really hope to get over to Okinawa one of these days... but as my wife's family all live in Sapporo, when we come to Japan it's almost always in the opposite direction.

A really interesting mix of cultures there!

AdelaideBen,
Sapporo's a unique place, too. I haven't been up there since 1987. Had a blast and was really impressed with the architecture. I felt like I was in Switzerland.