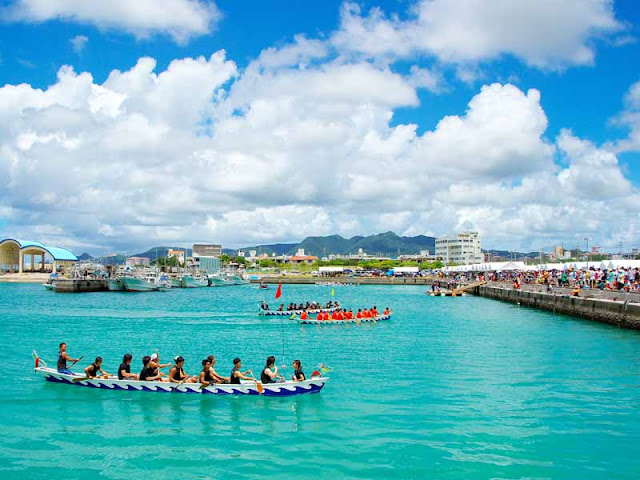 Landscapes, seascapes, cityscapes and sunsets lend themselves to the use of wide-angle lenses. As a wildlife photographer, usually I’m zooming in to reach out and touch something far away. But, there are times you want to be able to do both zoom and shoot wide angle and you want to be able to do it without stuffing a camera bag full of different size lenses. It can be done.


This photo was shot at the Dragonboat Races, an annual event in Nago Okinawa, Japan. My intent, here was to capture the crowd, sky and clouds and the three dragonboats finishing the race, all in one wide-angle shot.

A scene composed like this draws the viewer’s eye into the picture with what are called “leading lines”. The mountains in the background divide the photo roughly in half, separating the sea from sky. The position of the boats leads the eyes towards the white building, as does the angle of the crowd along the port.

Billed as the largest dragonboat event on island, I was sort of disappointed when I saw the size of the boats, as the dragonboats in the Naha races are much longer than these are. In fact, they hold a crew of 30 people.

Arriving at 7AM, 2 hours before the start, gave me plenty of time to scout out a good position for my camera and tripod. A few shots (Close ups where I used the zoom) of some dignitaries and pretty girls, with the blue skies and clouds as background, earned me an Official Staff armband and police protection, so I could shoot from anywhere I desired. There’s a lot more involved in being a travel photographer than just pointing and shooting the camera.

The lens that handled both jobs and kept me from having to switch lenses from wide-angle to zoom, for close-ups, was an 18-250mm. If you travel a lot and want one lens that does it all, it’s probably one of the best all-around lenses you can buy. You could go a whole year without ever having to swap lenses and worrying about getting dust on your sensor.

By the time the races started, over 500 white tents had been pitched at the port and 153 teams were involved, from all around the world; that explained the island’s “biggest dragonboat race”. I stayed for about half the event and had to go to the other end of the island to shoot another event.

Monday, I emailed the dignitaries and pretty girls their photos, then deleted them from my hard-drive. Who needs photos of pretty girls, anyway?

I’ve got a photo that makes you feel like you can walk right into it.

Have you got a lens that will zoom or shoot wide angle in your bag of tricks?

For a close up look at a Naha Dragonboat have a peek HERE.

That boat got me my 100th Editor's Pick at Better Photo, yesterday!

Posted by RyukyuMike at 9:56 PM

Hi Mike,
would you like to add an entry to our Show Me Japan weekend meme? We'd love to have you there!
http://www.budgettrouble.com/2010/11/show-me-japan-vol1-issue-1.html
Have a great weekend!
Anna

A and Y Ikeda,
Done but, I may have misunderstood the rules. Holler, if you need something different. Enjoyed your blog and you now have a new follower.