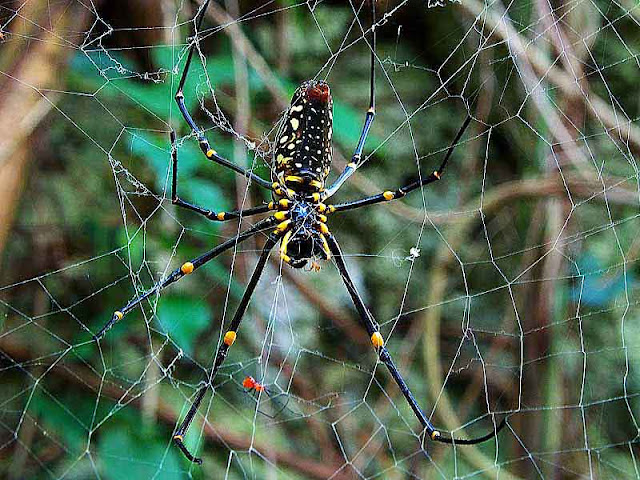 This photo was taken October 29, 2011 and I saved it just for Halloween.

In Okinawa we call them Banana Spiders but they are really Golden Orb-web Spiders.

Nephila clavata is what the scientists named them.  Some folks call them a Joro Spider.

There's a Japanese Folk Story about Jorogumo, the spider who can turn into a beautiful woman.

She tricks a guy into getting romantic and, I guess after he falls asleep, ties the poor soul up and eats him.  AHHHhhhhhhhh !  It's a HORROR STORY I read in WIKIPEDIA.

So, I just kept on digging on the internet, way past Wikipedia, to see if I could come up with something to scare the girls, too on Halloween.

It just so happens, a place called NATURIA something or other had this to say:

"The Male is so tiny that he can live in the female's web, stealing her food, often without her even noticing him.
She may not even notice that he has crept up and inseminated her!  Nevertheless, just to be sure, he usually does the deed when she is feeding."  End of Quote.  Ahem, ahum.....

LADIES BE CAREFUL WHENEVER YOU BEND OVER TO GET SOME MUNCHIES OUT OF THE REFRIGERATOR ON HALLOWEEN NIGHT.  SPIDERS COULD SNEAK UP ON YOU, TOO.

I hate you.. And spiders. LOL