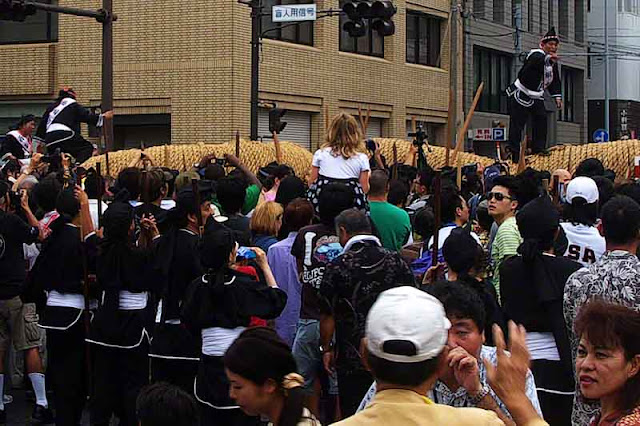 Most of you know, I like to throw a few photos on my blog every day and show off my island.
And, I pretty much like to keep things on the light side.
There's no humor in what I've got today so, if that's what you were looking for, I apologize in advance for disappointing you.
What this photo shows is the view from the reviewing stands at the 2011 Naha Tug-O-War.
The two ends of the Guinness World Record rope (male and female) are being joined.
Some foreigner, I'm guessing by the hair color, decided it was more important for his child to view the joining of the male and female ropes than all the folks in the reviewing stands.
There are over 50 photos I took attempting to capture the joining of the ropes but,  it was impossible to see because of, what I call, foreign interference.
Now, I'm lucky.  I was standing on a ladder at the reviewing stands.  I got a better view.
Two of my fellow cameramen were at different locations so,  I can get photos of the event if I need to.
As a matter of fact,  I can even get a close up shot of the bad parent using a child to obstruct everyone's view but, wouldn't want to give folks the idea that I'm vindictive, or anything like that.
Mind you, I shoot photos at many events and am well aware of people accidentally popping into view when a photographer is trying to compose a photo.  It happens.
This scene was not one of those accidents.  This went on for well over ten minutes.
Yesterday I spoke to a member of the Naha Tug-O-War Committee about this and was asked to blog about it.  So, here I am and I'm not happy.  But, someone needs to speak up.
Cultural insensitivity,  ignorance, or just plain stupidity,  I have no idea what it is.
What I think someone should do is apologize to the Mayor of Naha for this foreign interference.
Er, ya think I should just get vindictive ?
VISIT MY WEBSITE FOR THE PHOTO OF THE DAY

Posted by RyukyuMike at 6:47 PM

Are you serious? If you want a better picture get closer.

Nate,
Excellent advice but, I'm not looking for a better picture.
I have no idea what country you hail from but, everywhere I've been in my travels, reviewing stands are put in place for a reason. That is so the event being reviewed can be seen by the people in them.

I can tell by your photos that you're not interested in taking better pictures. Was this one person showing their kid the event more important than you seeing it for the upteenth time? Yes. I've followed your blog for a while through it's asinine ramblings and friendly tirades. I respect that you've been here forever, know the island like the back of your hand and have an unexplainable love for the terrible cameras Pentax makes, but I don't get what you would post such an absurd title. The viewing stands are for just that, viewing. View all you want. If you want to participate then you shouldn't be in the viewing stands and if you want to take better shots then you should have had press credentials and been right in the action, in front of where the 'foreign interferer' was.

It's a really small island and I'm sure we know each other if not directly then through someone. I hope you don't take this the wrong way.

Nate,
Obviously you know your cameras and photography much better than I so, I'll bow out on that.

The REVIEWING STANDS I mention were not just some viewing stands you'd see a child's T-ball game.

Mayors, ambassadors, elderly, some handicapped persons, distinguished guests, possibly, the Consulate from your country and a lot of people who worked for months to put this international, once a year, event together were supposed to be able to view this from the reviewing stands.

The title Foreign Interference, I chose deliberately and intentionally, to get a rise out of my audience. It seems to have worked, so far but, I'd like to hear more from some one less insulting and maybe, with the authority to make some positive changes for future events.

Probably 99.9% of the foreigners who travel to any given country are culturally sensitive, not ignorant, or not just plain stupid. I just like to see what can be done to keep the remaining 1% from spoiling things for others, here, in Okinawa.

I hope you don't take this the wrong way, as well.

I personally would just say plain stupidity. Since it went on for over 10 minutes. I would have maybe have done that for my kids.. but for a minute. Not taking up that air space with my kid for a full 10 minutes. It is rude especially considering it's a momentous event. Other people may want to see the joining of the two ropes.

Alison,
My poor choice of words, there. A better description may have been "inconsiderate".

The parent in this case may have earned their child a Guinness World Record for being the last one allowed so close to the rope. I guess that's something to brag about.