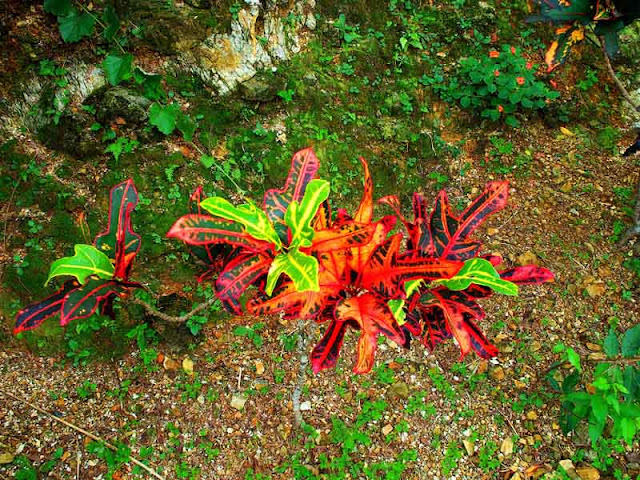 Like any respectable man who didn't sneak out of the house early enough, I got caught this past Sunday.  So, I took the wife shopping.  Then, after we put all the stuff away, went one step further and took her out for a Sunday drive. Being the romantic person I am, I promised I'd just bring along one of my small cameras.  See, the wife thinks the cameras are my girlfriends and I don't pay enough attention to her.  She's probably right but, I won't let her know.  She knows too much, already.  Like she knew the name of this plant even though there are hundreds of different variations of the dang things.  It's a Croton (Codiaeum varigatum) Kuroton,
クロトン, in Japanese. 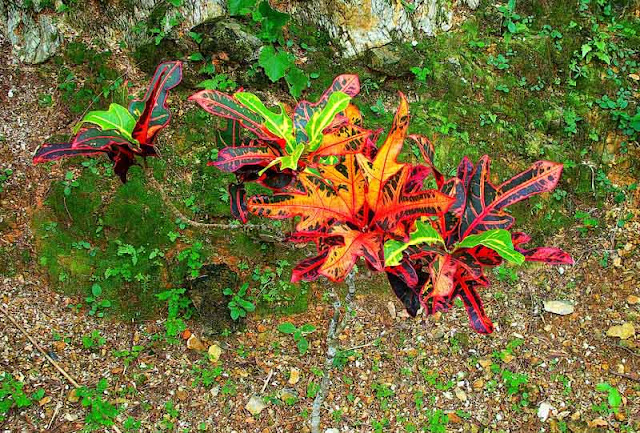 After I captured photos of the same plant from different angles at varied exposures I was ready to drive somewhere else up in the mountains.  These plants,  I've noticed,  are found at many of the sacred sites on Okinawa, so I always figured they had some special meaning.  I would never touch one except, maybe to move a snail out of the way for a better photo, or something like that. 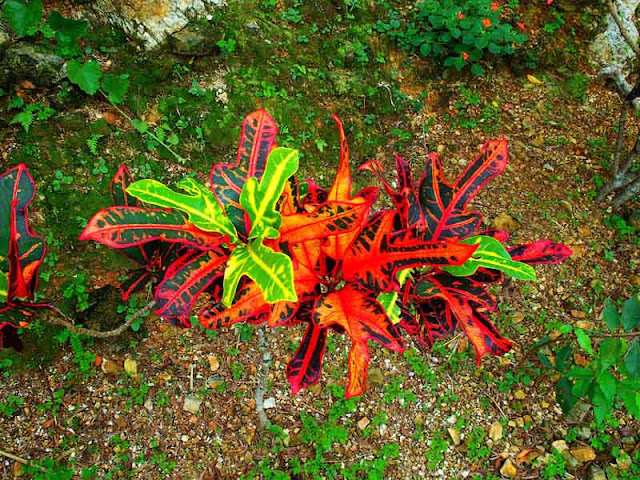 The Missus says there's nothing special about the Kuroton Plants being around sacred sites.  They are just planted because they are pretty.  Then, SNAP, she captured one, too.
The cutting is growing in my front yard, now.

My connections over at WIKIPEDIA tell me this Codiaeum variegatum is a Flora of China.
It is native to Indonesia and Malaysia but, it's cultivated in Fujian, Guangdong, Guangx, Hainan and Yunnan provinces of China.  That tells me there's more behind this plant than, it's just pretty.

Much of the culture and spiritualism practiced in Okinawa, Japan came from China back in the days when this island was called the Ryukyu Kingdom.  It will take more investigation for me to determine if the Croton Plant has some special meaning.  While the wife is nursing along the little plant she captured, I'll steer clear of it and only capture other variations with my cameras.
Not that I'm superstitious; just cautious.