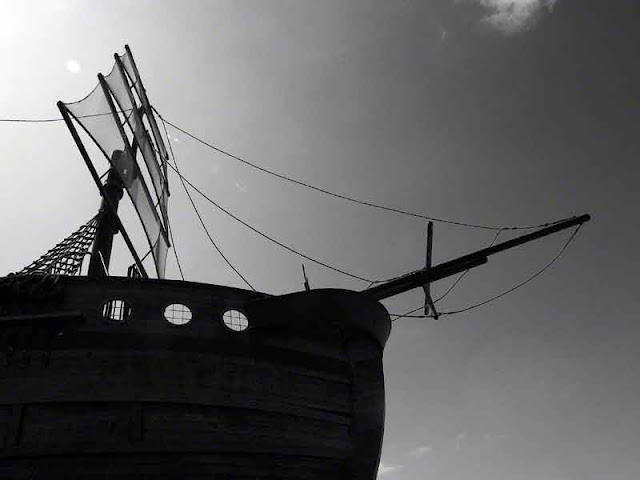 In an attempt to make this look as close as I could to the real deal, here's a photo of Britian's Indian Oak, shipwrecked off the coast of Okinawa, Japan in August of 1840.
It looks like it was involved in some Opium Wars with China when it got smashed, during a typhoon. The people of Chatan Village went out to rescue the 67 man crew, salvage what they could of the cargo, and even built them a new Chinese-style junk to sail home on.
This, of course, is a replica. Don't expect me to go wading around in the ocean looking for the real deal because I don't like getting all that wet and they have critters that bite you for no good reason in the ocean. 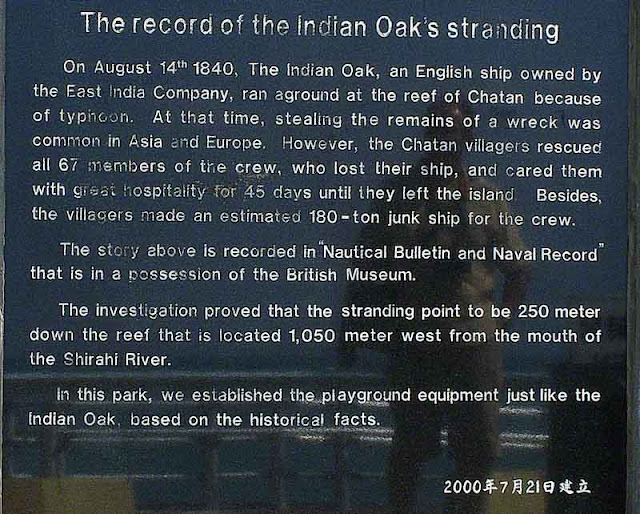 The people of Chatan built this replica of the ship and fixed it up so kids could climb nets and say, "Matey, Aye, Bounty, Walk the gangplank" and whatever stuff pirates say in movies, I guess.  So, the poor old Indian Oak is just a plaything, now.
Most things of any importance, I like to research before posting.  I looked at this photo of a plaque on a rock (see the ghost reflection?) and did some online searching.
The "Nautical Bulletin and Naval Record" of the British Museum either got the day off, or just doesn't want me snooping around in there because I couldn't find them online.
But, I did find an article about TONY BLAIR BEING INVITED TO THE PLAYGROUND
Whenever I find these items of hysterical/historical significance I think it's important to share the link so folks know I just don't make this stuff up.
More on Ships Calling on the Ryukyu Islands 18th through Mid-19th Century MAY BE SEEN HERE
VISIT MY WEBSITE FOR THE PHOTO OF THE DAY

Posted by RyukyuMike at 2:02 AM

My understanding of Japanese history may be quite incomplete, but from what I remember, they have been rather serious about remaining isolated for quite some time. Yet, most accounts from those who did manage to make it to shore have them being treated with the utmost hospitality, which I find fairly strange.

FishHawk,
Most any country, I hope, would see someone in need of a helping hand, differently than someone coming to invade. That was probably the case in this story though, I do find Okinawans more hospitable than most other places I've traveled.

Well that's very sweet of them to take them in and also build them a ship to get them home. :)

Alison,
Yeah, I think that Tony Blair guy should have been inviting Okinawan's over to his place for some beers, or something rather than them inviting him to the playground !