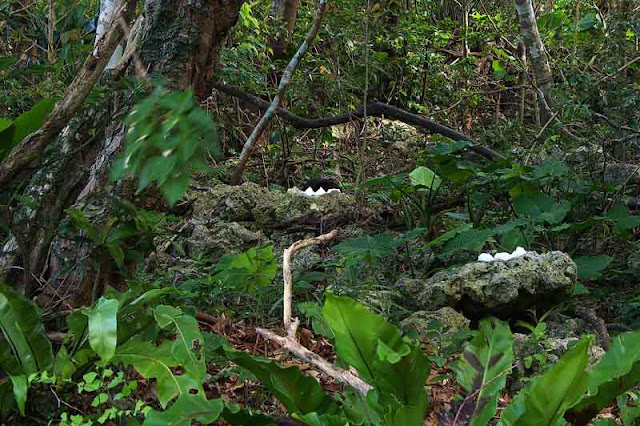 The past few weeks I've been traveling all over the Ryukyu Islands with that dude I keep calling RyukyuRu.  It's a blast but, the young guy acts like he's about half my age, goes up and down mountain trails, into the dark corners of caves and through the jungle like some kinda wild animal.  Half the time, I have no idea where we went.  He'll have to tell us where I took this photo of forest, rocks, and salt.  He pays attention to where he's going while I just tag along to shoot the camera.

Ru has one of those GPS gadgets.  It's great for finding stuff on Google Maps.  I just wish it had a few more important features built into the system.  Like, it would be better if it had a built-in flashlight for dark places.  And, it would be nice if it reminded people the sun is going to go down a few hours earlier when you're in the jungle or a cave than it does when you're at the beach.

RyukyuRu's real name is Lou.  It's just easier to say Ru, around here, because they don't have any "L's" in the Japanese dictionary.  Whenever I introduce him to anyone here,  I just say his name is Ru.  That way I don't get stuck giving free English lessons to everybody.

One of these days I may do a blog interview and Lou can let you know all he wants to about himself.  Meanwhile,  you can snoop around MAP IT OKINAWA and learn things about him while seeing more photos of where we've been in the Ryukyu Island Chain.

Today, I chose to title this post Forest, Rocks, and Salt: The Less Traveled Path, because of what we experienced yesterday.

We observed two women at worship in a well-marked UTAKI (SACRED SITE)  early-on in the day and steered clear so as to not disturb them.  They had placed three piles of salt in different locations throughout the Utaki.  Some were placed alongside the trail,  some on rocks, some at the base of trees in the forest, and others at small stone or cement shrines.

After we left that sacred site, we went to the less-traveled paths.  Places where we found caves, water wells, springs, thick brush, jungle, and hills a mountain goat wouldn't enjoy climbing, we kept running across three freshly laid piles of salt.  We're fairly certain the same two women had traveled off the beaten path and reached every location ahead of us but, never saw them again the entire day.  Dozens, if not a hundred, or more, remote locations and probably a few kilos of fresh salt had been placed in locations where we had to beat our own path.  Big mystery here.  Hmm.

After I'm done picking all the burrs out of my undercarriage, I wonder if I should go try and solve this mystery about the forest, rocks and salt piles on the less-traveled paths of Okinawa.

Or, should I  just stay home and drink beer?

Posted by RyukyuMike at 1:40 AM

Anonymous,
Try switching to Jack once in awhile. I find it helps get you climbing trees!