FOLKS DON'T MISS OUT ON THIS ONCE IN A LIFETIME SPECIAL OFFER ! 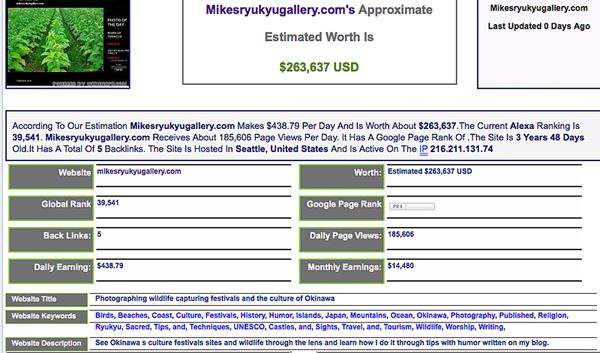 Most times rednecks like us don't make this much money in ten years.

Not even the real industrious ones ya see sneakin' out the back doors of banks.

That there screenshot, up above, came off the internet last night, probably while a lot of lazy folks were sleepin', or (big city dwellers) occupyin' streets.

Now, whoever dun the calculations and come up with an estimated worth for Mike's Ryukyu Gallery at $263,637 USD might have been leaning on the side of generosity, just a tad.

So, I'm going to round it off to, let's say, something like just a quarter million dollars.

The March Maddness Sale of Mikes Ryukyu Gallery (dot) com, website, blog and whole kit along with a kaboodle of photos (that's a lot) goes like this:

Understand, we got to get the money in the bank before April Fools Day.

Place your bid by hitting CONTACT ME on MY HOMEPAGE.

WILL BE THE PROUD NEW OWNER OF MIKE'S RYUKYU GALLERY

and this redneck boy's gonna go buy a fishin' boat to get around in, by golly !

Omg-do,
They would probably loan you the other 50 Grand if ya ask !