Friday Photo: Sunrise in the North of Okinawa 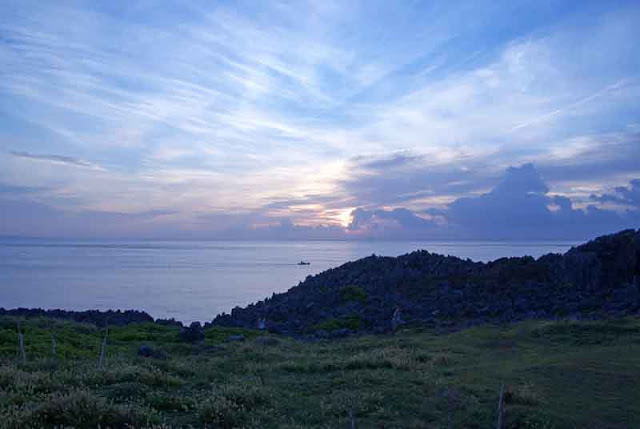 Here is a photo taken in 2008 from the northernmost point on the island of Okinawa.

It was for a magazine assignment I was on with Doc Graff.

Rather than have to wake up early in the morning and drive to catch the sunrise
I packed up the car and hit the road at midnight.

Sleeping on a concrete park bench was more comfortable than trying to curl up in a bucket seat.

It's been a few years since I shot that sunrise.

Maybe, it's time I headed back up to Hedo Misaki do it again.

Posted by RyukyuMike at 1:36 AM

Gorgeous shot! Love the clouds. Who would have thought a concrete bench would be more comfy?

So many people take photos of the sunset, but I think the sunrise are just as captivating. Great shot! I'm glad you took one.

Very beautiful and would be worth waking up early for that :)

Alison, Japan-Australia and Sherry,
Sorry I took so long posting your comments; I'm sort of un wired these days. Will getter fixed soon, I hope.
Meanwhile, I just keep using a WiFi spot and drinking thier black coffee.

Very beautiful pictures. I wake up early to take beautiful sunrises too and I know how nice it can be out there. Hard to wake up early, but it’s worth it.