Best Denki (ベスト電器) Everybody Should Visit

What's It Got to Do with Travel ?

Tired of the fluorescent lights blinking in my office, I went to this store.

They have Best Denki all over Japan but, this one was just a few blocks away. 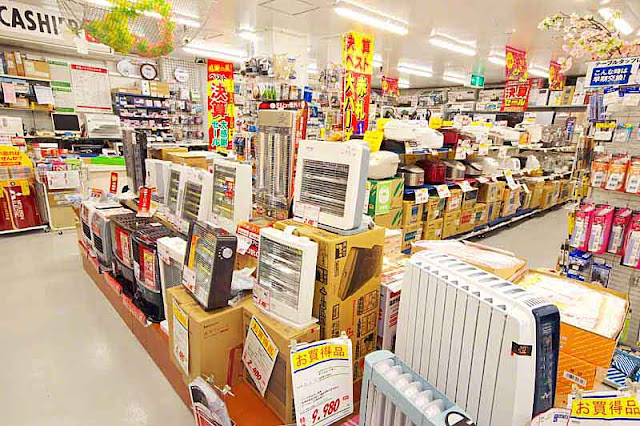 It was pouring down rain so, I had 3 of those blinking tubular lights banded together.

And, walked to the electrical store carrying an umbrella, looking like some sort of a nut.

White glass tubes, about 4 feet long and, some old man flying down the street with them.

It wasn't like I was the flying nun but, everybody stopped, to let me cross the street.

The rain was pouring down in sheets and , wind blowing me sideways.

Luckily, I had a brand new undersized, bright red jacket the wife bought me by mistake. 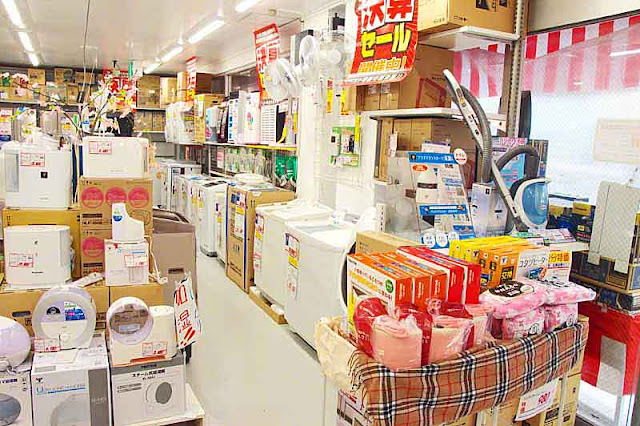 A store like this has everything electrical you could imagine.

Just inside the entrance, I looked for a place to drop my soaking wet accessories.

A shopping cart nearby, held my dripping wet umbrella and jacket nicely. 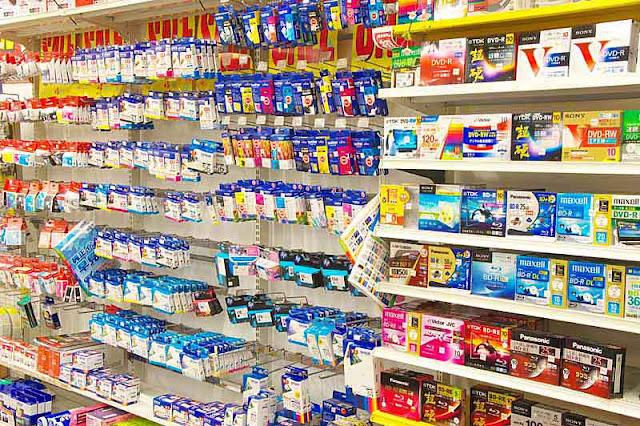 Luckily, there was a salesman there, who knew something about illumination.

He looked at my useless glass tubes and, let me know there were two different types.

Some fluorescent lights require starters, others have the starter built in to them.

Since, half the dozen lights in my office were blinking, I made a decision.

Buy two of each type and, I should be back in business is what I figured. 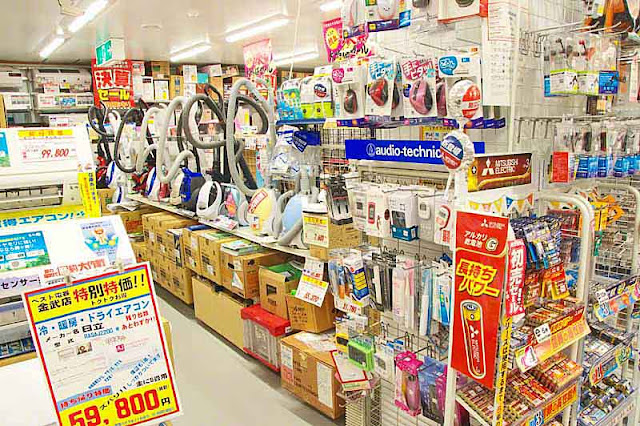 Months ago, when they first opened, I promised to come back with the cameras, someday.

So, I told the guy and gal working there, I might come back today if, it kept on raining.

Whoops My Starters Were Starting

Back at the shop, I ripped all the cardboard light tubes open and, went to work.

A two step ladder and some stretching, to replace lights, fixed everything, almost.

All the lamps that were broken, needed no-starter tubes replaced.  Groan. 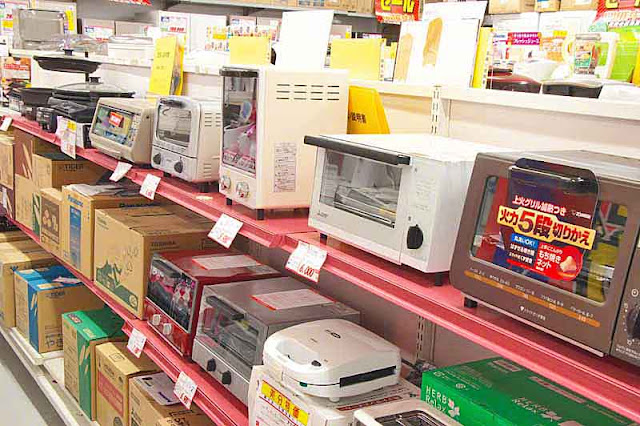 Stuffing the brand new lights back into soggy wet, torn boxes, I came up with a plan.

This time, I'll bring my camera along and, do some photography.

Maybe, they'll treat me nice and, not be too upset, with my lousy wrapping job.

My second trip to the store, it was still raining hard.  It was cold and windy.  I hate January.

They were glad to see me, drop off my umbrella and wet stuff at the front door.

Seeing the guy, wrangling with the cash register, calculator and refund, I excused myself.

That's when all these store photos were taken.  I went all over the joint. 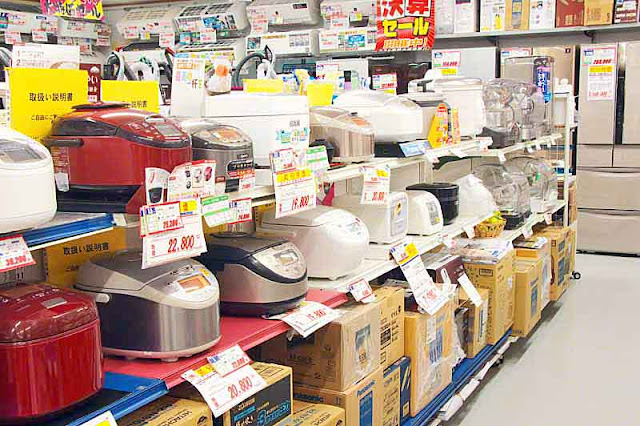 It is a fairly small store, with narrow isles so, I'm glad they weren't busy.

Two big people passing each other in this store, might have to do a little rubbing.

Here, you can see some of the sizes, shapes and colors, of rice cookers available. 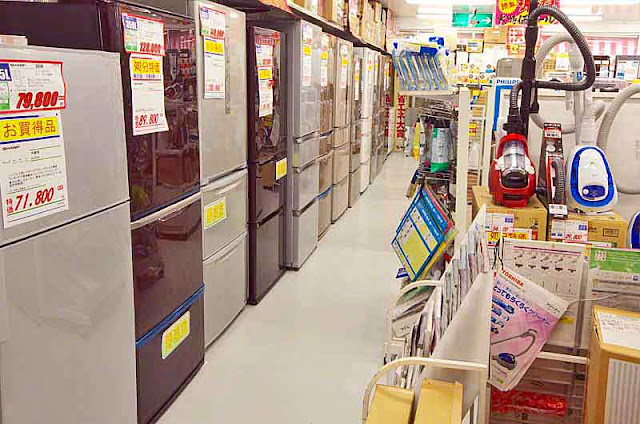 Way in the back of the store, I found all the refrigerators and vacuums.

It got me thinking. Nobody needs a refrigerator, when it's this cold outside.

Just, stick your bottles of beer, out on the back porch ! 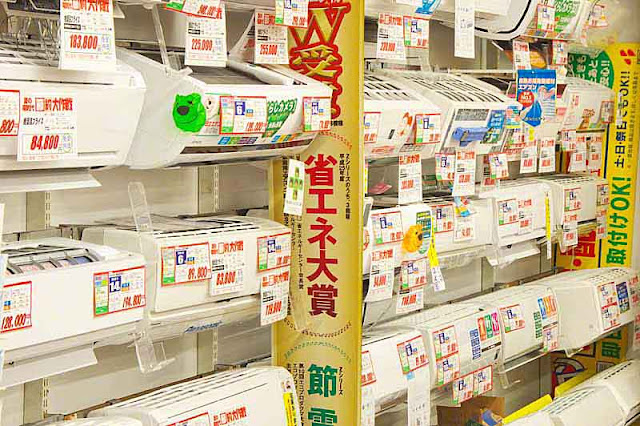 Here are some of the most popular appliances in Okinawa.

Many months of the year, air-conditioning, becomes a necessity, not January though.

The neat thing about these new, energy efficient models is, the have built-in heaters, too.

What's There for Travelers in an Appliance Store ?

By now, you're probably thinking, I went and killed too many brain cells.

Some research for travelers led me to an important discovery about Best Denki.

It was so interesting, I went back, in the pouring rain, a third time today.
How about -- Items You Must Buy When Visiting Japan ? 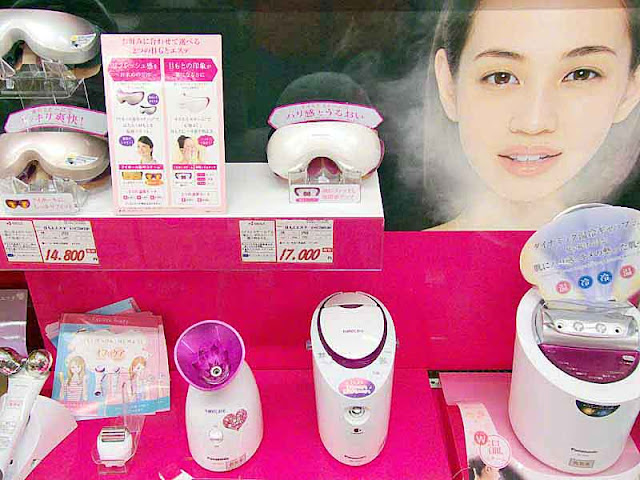 With some notes, scribbled down and another camera, I slogged back to the store.

My list had the three most popular electric appliances in Japan on it.

So, I wanted to see if, this tiny Best Denki shop had any of them.

Number One: A Panasonic "Nano" Care Hair Dryer, got me started.

There's all kinds of Nano Care stuff, to make women more beautiful.  I was lost.

So, I walked over near the counter and, asked a gal to help me. 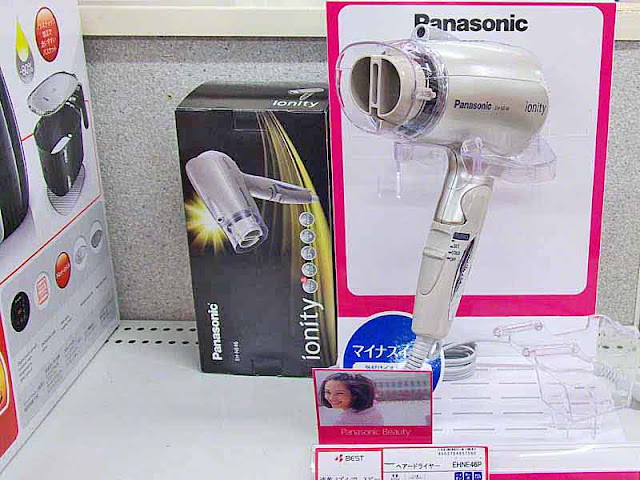 Between my limited Japanese and, her English, we found this item.

Nano Care, is a gadget that drys hair differently than your run of the mill dryer.

The thing, shoots some kind of negative ions in the breeze that drys your fur.

This "ionity" by Panasonic, has the negative ion thingy mounted above the blower.

It probably, does the same thing but, the gal said, she'd order some Nano Cares, too.

Here's a quote from the source, I linked to above:

"If you have Japanese female friends, ask them what is the most recommended hair dyer in Japan. Many or all of them would reply to you that it’s “Nano care” from Panasonic."

Now, I'm wondering if that would work on softening my beard !

They had one in stock but, Okinawa is different than the rest of Japan.

People on this island, don't mind doing physical stuff, like sweeping the house.

Some robot, running around, sucking the floor probably, wouldn't be a big seller.

The demand, for this sort of gadget in mainland probably, was greater and, off it went. 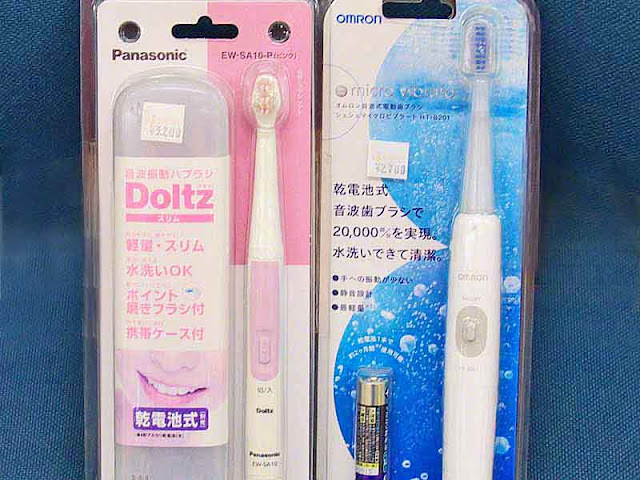 This one had everybody stumped for awhile because of the word Denki (electric).

But, the electric dude, heard me talking about it and, a light came on.

We found a few but, they aren't exactly popular in this neck of the woods.

When I told the gal, I use one everyday, she seemed surprised.

I said, they clean your teeth better than a dentist and, she might order some.

Explaining, that foreign visitors would probably buy the stuff, she agreed. 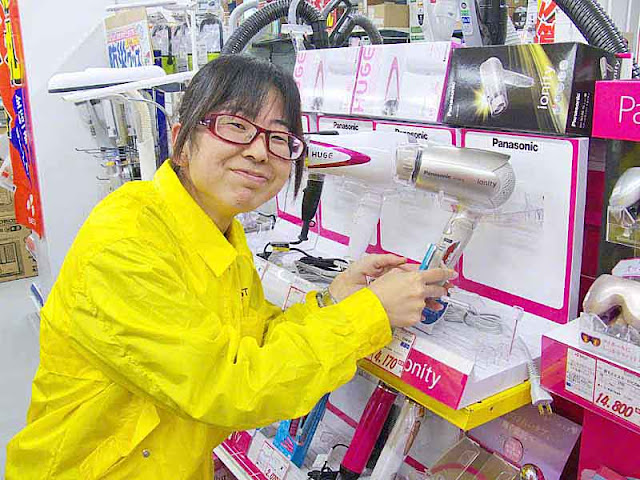 Then I asked Sayano to stand by the negative ion hair dryer for a photo.

That way, English speaking customers, know who to look for in this store.

The stores are all over Japan and, they have them in Singapore, too.

Posted by RyukyuMike at 9:14 PM