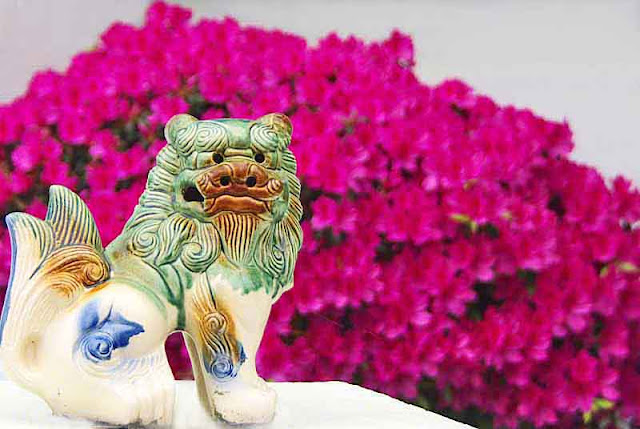 She Asked for a Picture of Her Flowers

Those bright red azaleas blooming in the background, were supposed to be the subject.

The gal, who maintains the garden plots and home by my office, asked a favor.

She wanted a photo of the flowers, blooming outside her house.

Directions to the residence, were sort of figured out using Google Maps.

Senior citizens have a bit of difficulty with those googly things so, I wasn't sure.

When, I found this two story home with red azaleas blooming, I just started shooting.

Well, out of the house came Mrs Yamashiro so, I knew this was the right spot.

Then, I asked her if she had a step ladder, I could borrow.

She, went back inside and, came back with just the gadget, I needed.

A two step ladder, put me high enough in the air, to snap this photo of the shisa.

Down on earth, the critter's head couldn't be composed, with the azaleas in the background.

Now, I'm not sure, which photo Mrs Yamashiro will like best.

But, I printed this one, to give her, with all the focus, on the shisa statue.

That's because, next Sunday happens to be, Shisa Day in Okinawa.

Whenever Mrs Yamashiro needs something heavy moved, she comes and gets me.

She's a real sweetheart, who's always giving me coffee, tea and beer.

So, I figure, she deserves a free photo, once in awhile for all the nice stuff she does for me.

For example, when she's not around, lots of things in her garden get volunteered.

Snip, and they even come into the office, to get photographed !

Don't you wish, all neighbors got along as well, as she and I do ?

Posted by RyukyuMike at 4:26 AM