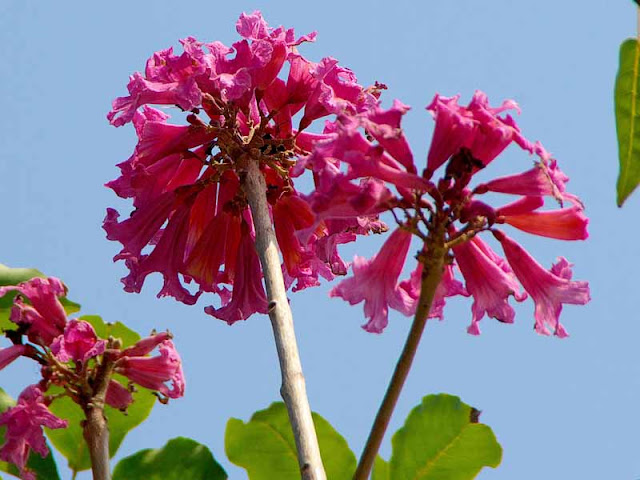 This gets better all the time. Just as soon as my head cleared from researching those Golden Trumpet Trees another breed of them started popping out of the tree branches. Only these ones are PINK ! 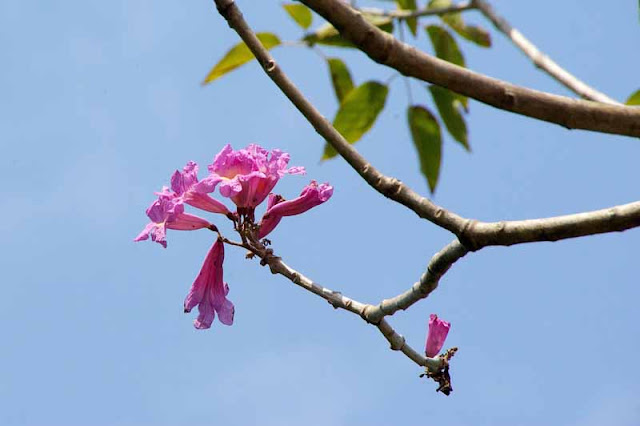 The wife told me about them. She said they were Ipe Trees and told me where she spotted them. So, first thing I did was harness up three dogs and hiked down the road without a camera, just to have a look. 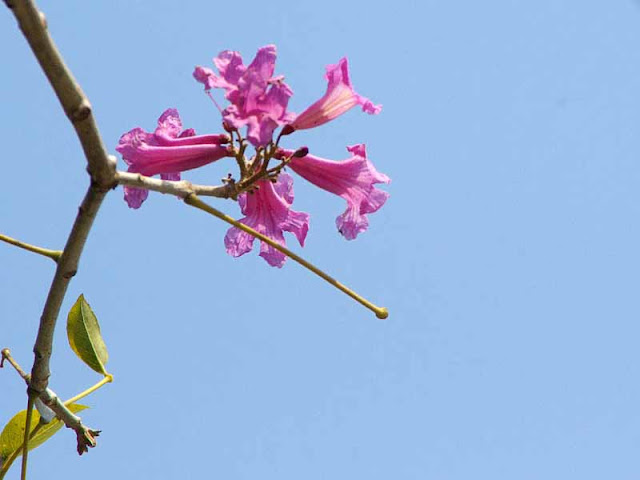 The pink flowers I saw were growing right near some other trees that had Golden Trumpets on them.  They were across the highway from me.  Between the traffic and some construction going on along the highway, I decided, I wasn't running across the street to look any closer. The pink flowers looked too small to be Ipe tree flowers, to me.

So, I went home and did what any respectable man does.  I told the wife she's nuts.

"They ain't Ipe flowers and they ain't even close to being Ipe trees. They're different, Hah !" 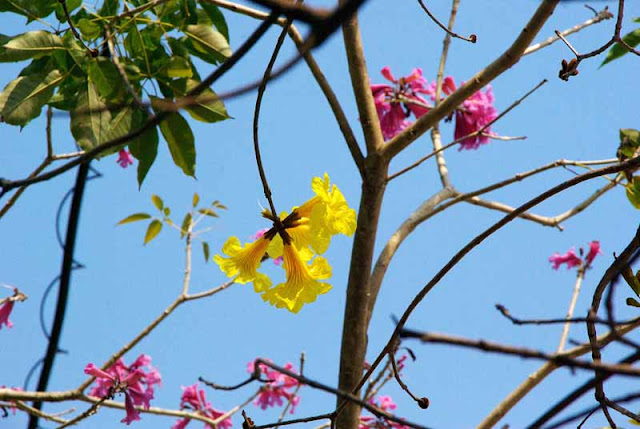 Well, it was International Women's Day yesterday so, I decided we'd go on a little romantic walk.

That way, she could take her dog and I'd only have the two Huskies, of mine, to walk.

Plus, I could show her women ain't as smart as men, when it comes to looking at trees. Hah, again ! 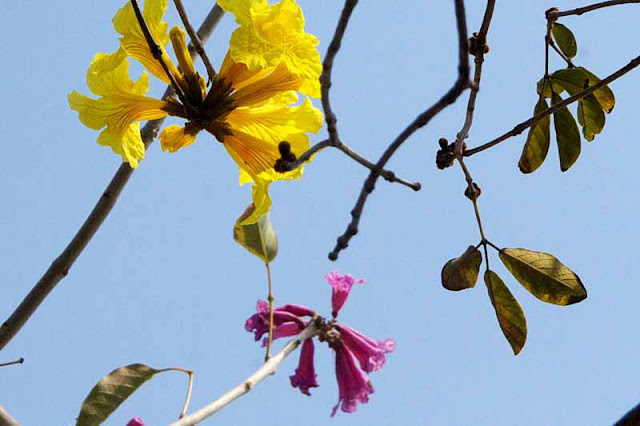 Well, sonovagun, when you get close enough to see the little pink things they are just like the yellow ones, only smaller. 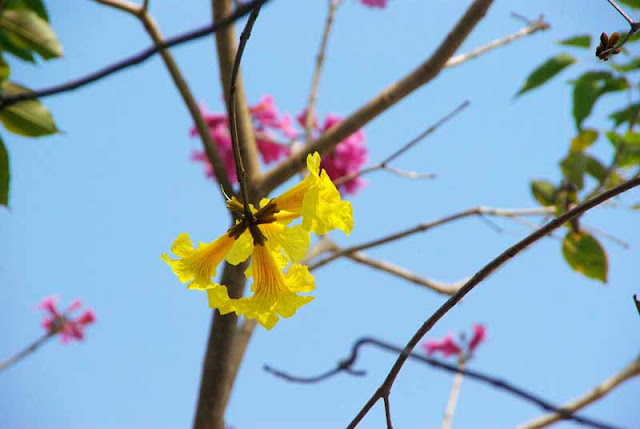 Today, I went back and took photos so you can see for yourself.  I wish I could have climbed up in the trees and grabbed a few of each.  That way I could get them out of the wind and place them side by side for a better comparison.  If only there weren't so many construction people watching. 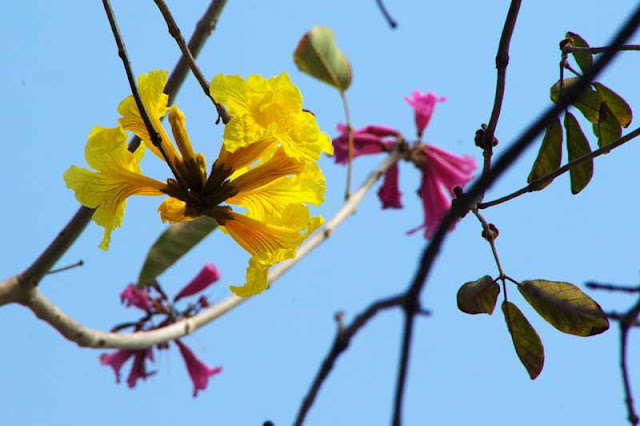 The pink flowered trees have larger leaves than the yellow ones.  Even the wife agrees with me on that. 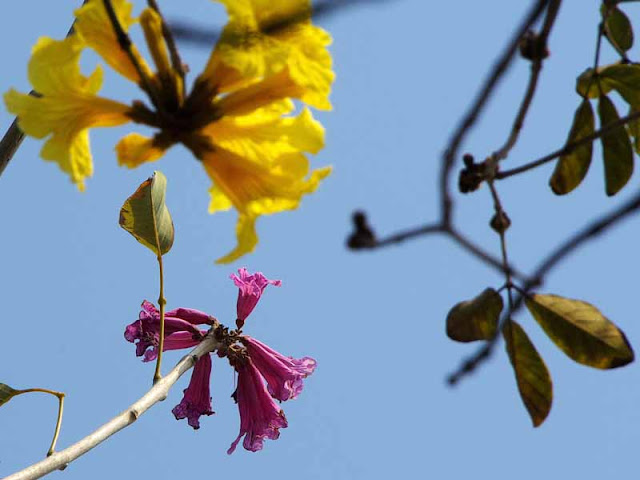 Most of the leaves on the Golden Trumpets have blown away so, what you see in these photos are the pink flower's leaves. 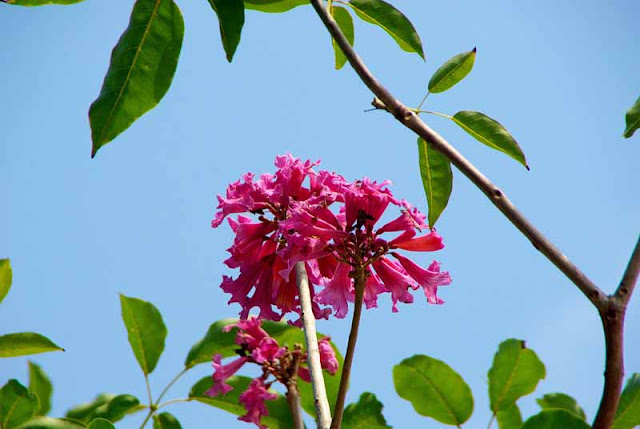 In my never ending quest for truth, I found THIS ON WIKIPEDIA so, I guess it's safe to call the trees TABEBUIA . They are definitely Ipe Trees. 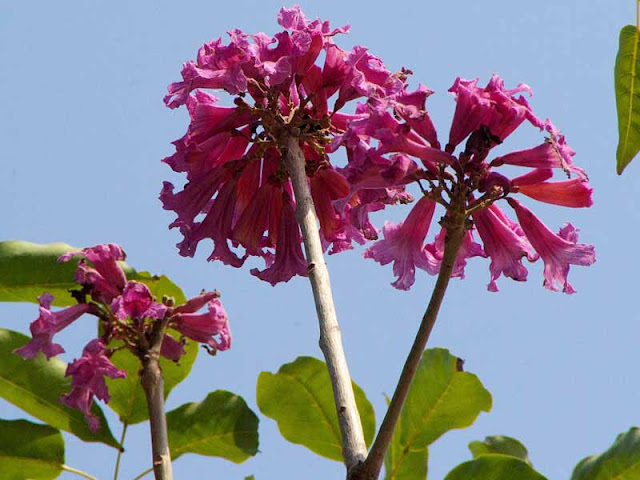 It sure would be nice to know what the scientific name is, though. I bet the Pink Trumpets and Golden Trumpets have different names. There has to be some way to convince the wife she was wrong.

Maybe we'll just have to go back under the cover of darkness.  I'll hold the ladder and send the wife up to snatch some branches of the Golden and the Pink Trumpet Trees.

If we happen to get caught, I bet the judge knows the Latin names for those flowering trees!

Aye it's never a good idea to be seen picking flowers in full view of the teamsters!! Beautiful pics of the flowers but as you well know, woman are always right.

Ryan,
Yeah, next thing ya know #)^*%+#4frickin purple things'll start springin outa the trees and I'll be runnin around investigatin them, too.
Wonder if that Wikipedia guy is really a Dude or a woman, now?

It's 7am here and I've just heard the news Mike, are you ok mate.

Ryan,
Thanks my friend ! All is well and you gave me an idea for my next blog post. That's if the dang internet quits shakin on and off !

Where I live is way south of the action that's taking place up in mainland Japan.

Even if a tsunami comes, I'm high above the coast.

Hmmm...I live on a street that is lined with trees bearing the similar flowers, only of a lighter shade. I don't really know what they are called and have been trying to find out about them since long. I lovingly just refer to them as my sweet Indian Sakura flowers.

So, I was wondering whether I could link you to a picture tomorrow and you could confirm if they are they same, please? I have one picture of them, but it was clicked very badly as people here give rude stares to kids with big cameras strutting them around at 7 in the morn (even though I am not a kid).

Lithium-aura
Sure, post a link and I'll have a look. Trust me, though, I'm far from an expert at flower IDs !

I managed to click a few today, hiding from a seemingly safe location. Here's the link : http://s32.photobucket.com/albums/d34/naytra13/Pink%20Flowers/

The entire road is like a carpet covered with these flowers which cars, people etc. all stamp on and turn into a pulp. ^_^