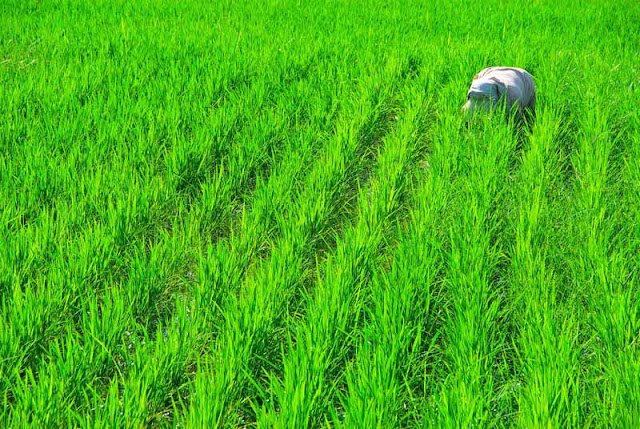 This photo was taken on the outskirts of a small village named Yaka in Okinawa, Japan.

There are some small tractors and tillers used in preparing the rice fields but, planting, cultivating and much of the harvesting is manual labor.  No one would complain about the high price of a bag of rice in Japan if they experienced the hours of labor expended in its production. You can taste the effort involved.

Planting rice is never fun especially when you are whole day under the sun. So to all the farmers in Japan, I salute you for the effort done...:) Your photo is lovely and green! Thanks for sharing.:)

Thanks for posting to Travel Photo Thursday.

Jorie and LadyE, Thank you. Yup, sure is green. I should have posted this one St. Patrick's Day !

That field looks like the colour of spring - and not the dark green of a Vancouver winter. Love it. I have sympathy back pains too looking at someone bent over like that.

Leigh,
Yeah, I hear ya. These folks spend hours and hours like that working outdoors in all kinds of weather. It may have something to do with them living 100 years, too though.

It isn't done anymore around here in Italy (manually i mean) but the "mondine", lit. she-cleanser, she as it was mostly done by women is considered to be one of the worst (as in for the fatigue and for the health risk) work in existence.

P.S. while Italy is know all around the word for pasta in the northern regions rice (and risotto) is/was more common than pasta.

Why we like travelling Asia after the monsoon when the rice fields are so brilliantly green.
Jorie, you're very poeteic again.

What a difficult job that must be-- such hard-working people.

The rice in my curry will never taste the same again, respect to these hard working people.

Ryan,
You mean you actually eat that stuff?
It's popular over here, too but, curry is a dish, I think, invented in India.
I have some once in awhile but, the old bod just doesn't digest stuff the way it used to so, I pass on the second and third helpings.