Flower Lovers and Fans An Iris Field For You ! (Photo)

Here it is April 1st, 2011.  It's April Fool's Day but,  I don't have anything to fool you with so, I'm just going to do a quick post, grab my cameras and get out in the sun to do some more shooting. 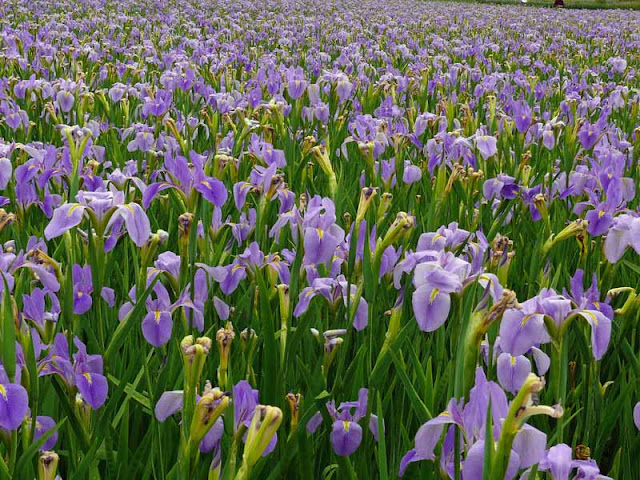 This photo was taken on April 5th of 2009 at the Iris Festival in Ogimi Okinawa, Japan using my trusted old friend the Panasonic DMC-FZ50, a Manfrotto 725B Tripod, and a few other tricks I'll share at a later date.

This morning I received an email I'd like to share with everyone.  It came from someone thanking me, and those of you who helped me, through various channels, get relief to the people suffering in the aftermath of the earthquake and tsunami in mainland Japan.  This is real, feel-good news.


Almost all of my family lives in Japan. So when the earthquake hit, I tried to help in every way I could, including by donating via text message to relief efforts.

But then I learned that text donations like mine could take up to 90 days to get there. I waited for days to learn that my family was safe, now others were waiting months for my donation!

So I launched a petition on Change.org calling on the phone companies to immediately deliver donations to Japan, the same way they did after the earthquake in Haiti.

It worked! Hundreds, then thousands added their voices. My senator, Barbara Boxer, took up the cause. I was interviewed by the major news programs in San Francisco, where I go to law school.

More than 66,000 of us (including you!) spoke out and now AT&T, Sprint, T-Mobile, and Verizon have finally agreed to expedite text-message donations to Japan.

Northern Japan has an incredibly difficult path to recovery -- the earthquake and tsunami both physically and financially devastated the affected areas -- and there’s a lot more that each of us can do. But the immediate transfer of donations is going to be of enormous assistance, and my hope is that this victory sets a pattern for how cell phone companies act during future disasters.

This all happened because, at the encouragement of a few friends, I started a petition. If there’s something you want to change, click here to start your own, and I’ll do my best to stand with you the way that you stood with me:

Thank you again. And please continue to keep the people of Japan in your thoughts and prayers.

Now, I don't know about you but, to me, that feels good, even great!  A reader of this blog got me involved in that petition and a bunch more of you participated, I know.  It made a big difference and it is getting more help, through to the people who desperately need it, quicker.  That's good!

Personally, I don't use a telephone for making donations.  But, for those who do, it is nice to know that your contributions are getting there without any delay, now that this stumbling block has been removed.

To everyone who supported this effort and the BLOG FOR JAPAN relief campaign,  I am grateful.

This Iris Field is for you!

Awesome Story Mike! Good to know we can make a difference. One piece at a time , One person at a time. Feels Good!! Thanks for the Iris Field.

Gene,
Really, sometimes I wonder what got me involved in this blogging nightmare. And, I plug away at it almost every day. There's no money in it, for me, anyway. But, when folks like you keep coming back and encouraging me and I get an email like that one from young Masaya thanking me, it means more than any paycheck I've ever recieved. Feels good!

Well done to Masaya, yourself and all the good guys out there, after reading about all the scanners out there, it's stories like this that restore belief in human nature.

Keep up the good work Mike.

Ryan,
Thanks. It does restore the belief in the good side of human nature but, probably doesn't sell newspapers. I'll bet there's lots more good news that doesn't get reported because of that fact.
Guess bloggers will have to pick up the slack!