Birds of Prey Made the Day

During November Outdoors is Where to Be

This morning, I decided it was time to go for a long walk with the camera.

No need to check email or Facebook, with election USA so close.

There's nothing but a bunch of mud-slinging going on, between two candidates.

Disown me if, you want, neither of them is fit to run a country, in my opinion.

It's November 1st and the weather finally got comfortably cool.  No A/C required anymore. 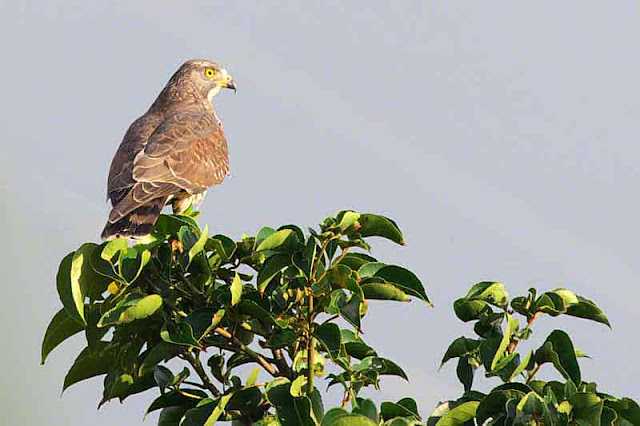 Quietly, I slipped out of the house, before anyone else woke up.

At the office, I didn't bother turning any computers on. Just grab a camera and tripod and, go.

Almost forgot, I packed a lunch in a camera bag and, slung it over my shoulder.

My destination was the Kin Dam but, I took a roundabout way, to get there.

The dam entrance, is only about a 45 minute walk if, you go in a straight line.

Well, I walked sort of in the opposite direction, for awhile, along a backroad.

Buzzard Eagles, returned to the island recently and, I knew where, I might find one.

Five minutes, after starting out, I spotted one and, shot a dozen photos.

It was among telephone and electric wires on a concrete pole but, I shot it anyway.

Good target practice and, I got a golden eye, with sun shining in it.

The bird above, wasn't much larger than a pigeon but, at least it was out in the countryside.

Before I got to the dam, two Grey-faced Buzzard Eagles, were shot. Not a bad day.

This all took place, before 8 o'clock in the morning. Should I quit and, go home?

The thought had crossed my mind. It's been a long time since I hiked the distance to the dam.

Stifling summer heat, kept me away from doing long walks, for the past few months.

But, I had already packed a lunch and, was enjoying the fresh air so, kept on going.

There's something soothing, about taking a long walk out in the wilderness.

The sights, sounds and smells of nature, must wake up something in the brain.

Don't listen to creaking bones or aching muscles. Just keep on walking to the damn dam.

That was the original plan so, that's what we were going to do, dammit. Keep walking.

Before long, I was halfway around the dam and, got thinking.

Take ten steps, in any direction and, you'll be ten steps closer, to your ultimate destination.

It may not be where you initially planned on going. Know what I mean?

It don't matter, what your plans might be. Ten steps, gets you closer.

Whether you're planning on going to heaven or hell, it's ten less steps, you'll need, to get there. 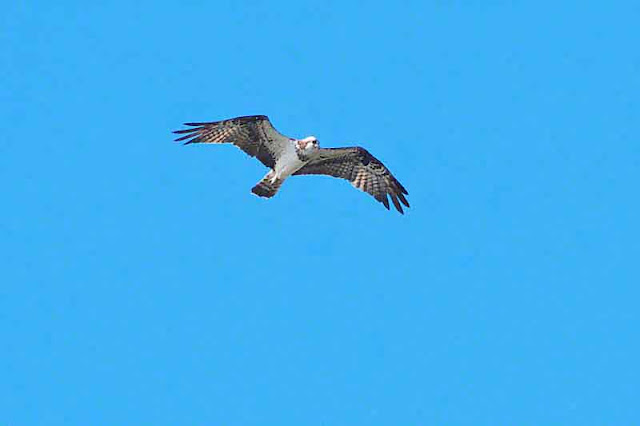 Back to the Birds

Before 10 AM this Osprey image was captured. There will be many more this season.

None of the bird photos, I shot today, would be considered trophies.

But, it was the first time, this autumn, I had a camera handy, to get some shooting done.

Just as, you're body gets out of shape, from not exercising, camera skills, can get rusty, too.

Being satisfied with the photographic capture of two different birds, it was time for a break. 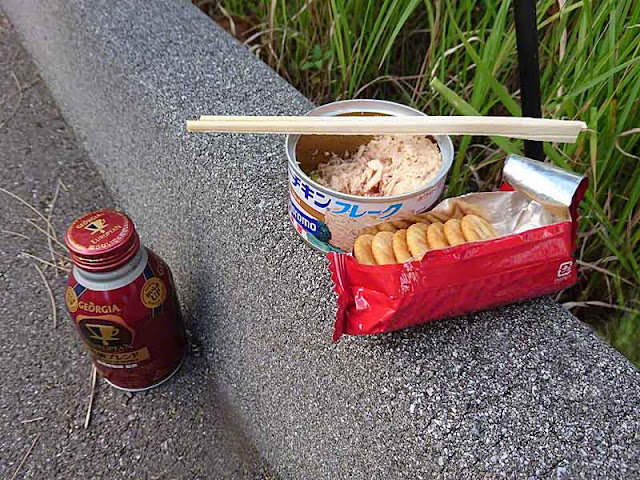 A bit past 10 o'clock, I decided to sit down and, have a little brunch.

Ritz Crackers and tuna, are what I pack away for excursions like this.  Coffee, too.

My tripod and camera bag are in the grass, behind the curb.

Wouldn't you know it?  Take your eyes off the sky for just a moment and, birds show up.

But, I was on my break so, shot this dinner picture, for you, with the cellphone !

Meandering, back towards the office, I stopped to buy a bento.

It was just about noon, when I arrived there, sweaty and tuckered out.

That does it. Tomorrow, I'll leave home at five and, pack a larger lunch, to stay out longer.

TYPES of RAPTORS
Posted by RyukyuMike at 7:10 PM