Photo of the Week: View of Kudaka Island from Okinawa, Japan 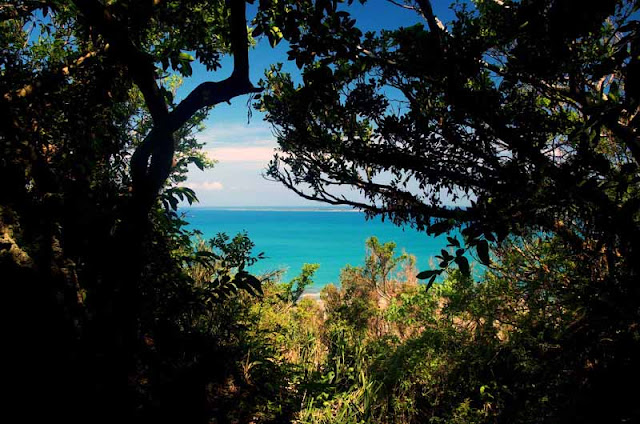 Here is a photo of the view tourists and travelers come to see when they visit UNESCO World Heritage Site Sefa Utaki in Okinawa, Japan.  Barely visible on the horizon is Kudaka Island.  It is the place, Okinawans believe, where human life originated.  One of these days, I'm going to hop on a boat and go take some close up photos.  It could be like the Garden of Eden without the snake and that gal named Eve !

Yes, they don't have the snake and Eve, but they have an incestuous couple who created the first human, after, of course, failing quite a few times. :D

Editor's Note:
Ouch, I never dreamed of calling myself an Editor but...

Alina and I corresponded over the above comment. I was concerned about some fellow bloggers jumping all over this with snide remarks, I'd have to reject, and equally concerned with the feelings of my Okinawan followers.

Alina Radulescu is a student Okinawan culture and history and I'd like to share some of her reply with my readers:

"I think the creation myth of Ryukyu Islands is quite widely know and also creation by incestuous couples is a type of myth spread world wide. Also, I don't know if you are familiar with the Onari-gami belief of Okinawa people, but the relationships between brothers and sisters are very highly regarded in Okinawan couple. Okinawan people tend to belief that a man's sister is way more important than his wife. Of course, lots have changes with the introduction of Western mentality, but the traditional belief is like that. Lots of Okinawa families have stories about their ancestors being sister and brother. I am not sure this is an insult, but maybe I took it too lightly when I commented. Actually, in Kudakajima the story talks about two of such couple of original gods. There is a couple who created the island and brought human life and the couple who found the first seeds, the origin of the first crops. The four of them are venerated like god and they are brother and sister couples. I meant the incestuous without any offensive intent, but as a historical (well, mythical fact), widely recognised in Kudaka. I am fairly certain that Okinawa people would understand my comment for what it is."

Alina, Thank You for the clarification. I do like to keep this blog on the light side while sharing the culture of the Ryukyu Islands.

To anyone who'd like to turn this conversation into a three ring circus, I guess, I'll keep being...

Thank you, mister editor. I really love all the mythology around Kudaka, so it's good things are clear.

Let me lighten the tone Mr Cameraman, I love the shot of the island and didn't we all evolve from chimps? Ooh ooh where's my bananas...

Ryan,
Not for certain what we all evolved from but, I had a gal say I was a Neanderthal, once, or twice !