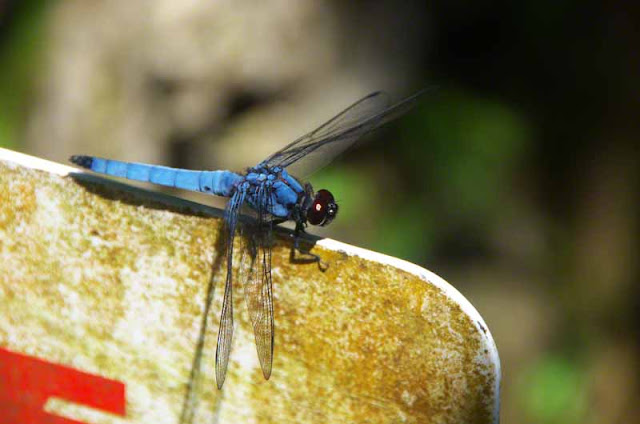 It was a blast getting out in the sun today and shooting something besides festivals.
Here's one of the first photos I took and for the past three hours it's been driving me crazy.

The research (all over the internet) has helped me narrow it down to this:
IT'S A BLUE DRAGONFLY WITH RED EYES !

After looking at a few thousand thumbnails of dragonflies, trying to come up with a scientific name for the critter, I gave up.  It's making me cross eyed and that ain't good.

Anybody out there got a degree in bug-ology?

The closest I came to identifying this bug was something called a Blue Dasher.

I don't make this stuff up.  The scientists named it Pachydipiax longipennis.

They're common in the USA but I took this photo in Okinawa, Japan.

You don't suppose bug smugglers are bringing them over here and turning them loose in the woods.
Do you ?

Hi Mike,
Join the club! I have been doing exactly the same! A lovely picture of a blue dragonfly, congratulations! Mine was also photographed in Japan, and browsing the web was also disappointing for me, leading to a similar blue dasher conspiracy theory. Yet with about 5000 species of dragonfly out there, I have my bet on it being something else. Mine has brown wing tips in addition to the dark spot on the distal leading edge and I haven't even been able to work out whether that means it is a different species to yours or a variation of the same species. One is starting to worry that the world is left ignorant of things that matter! Surely there must be an entomologist who can help us... I'd be grateful if you could let me know of any further progress in your hunt, perhaps we should join forces in the hunt! Best wishes, Jorge, PhD, (italy)

Jorge,
Nice meeting you here. So far, no luck in the positive identification but, you'd be surprised at the help I get, sometimes after posting here.
I'll keep you in mind if band when an ID shows up.

Hi Mike, It looks a little bit like Lyriothemis pachygastra, yet I could be very wrong. I think you'll find this link interesting...
http://www.odonata.jp/00english/index.html

All the best,
Jorge

Jorge,
Thank you. I've bookmarked the site. It does look promising.