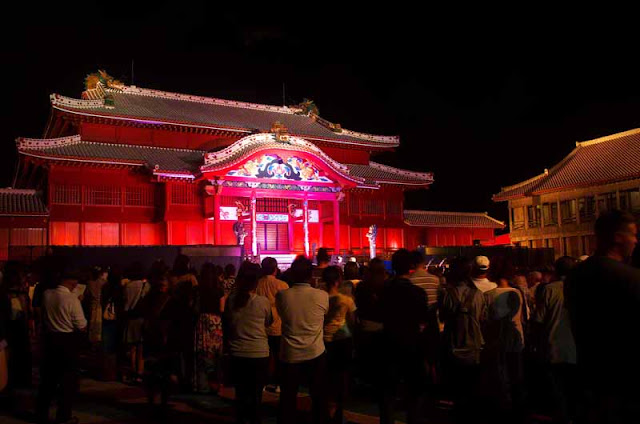 Last Sunday's batch of photos from Shuri Castle in Naha Okinawa, Japan has finally been developed. 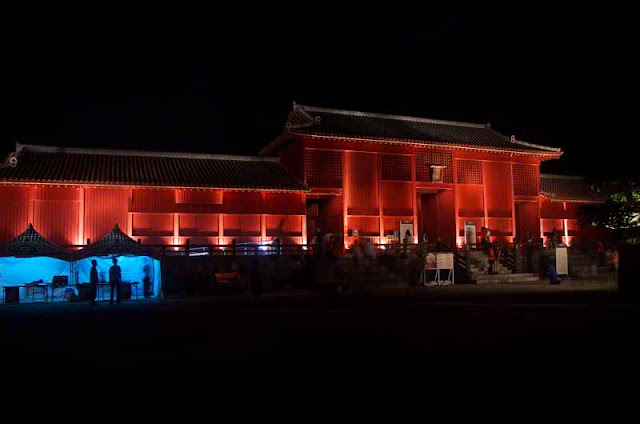 Based upon the responses I got from the Moon Viewing post I decided I'll share more of the night scenery at the castle.  Normally, after these type events, I would try to delete two out of every three photos because there will always be motion blur, somebody tripping over my tripod or walking through the scene when I'm attempting a long exposure. 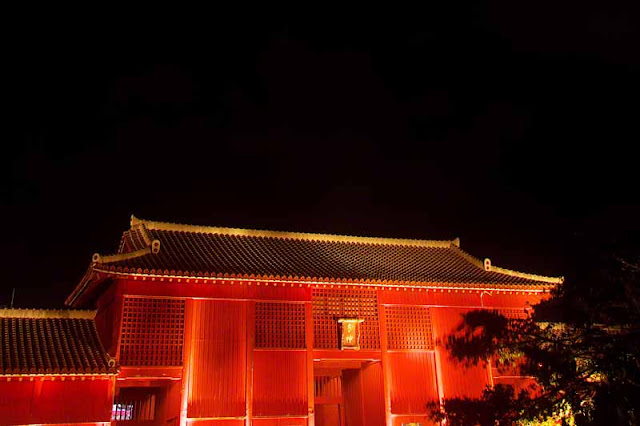 But, some of the photos I shot this time, I composed to avoid people. 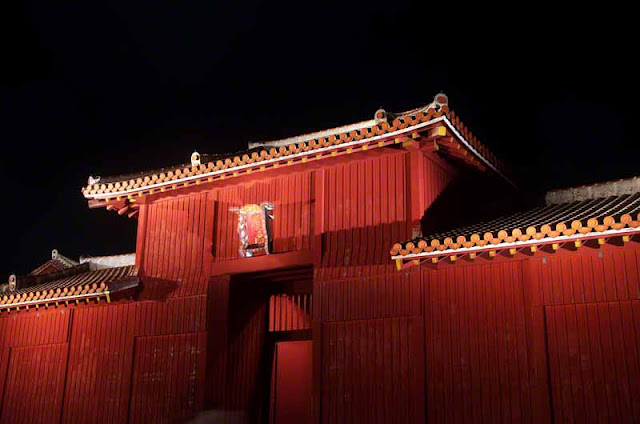 They may not be award-winning compositions but, I got a chance to take my time shooting them. 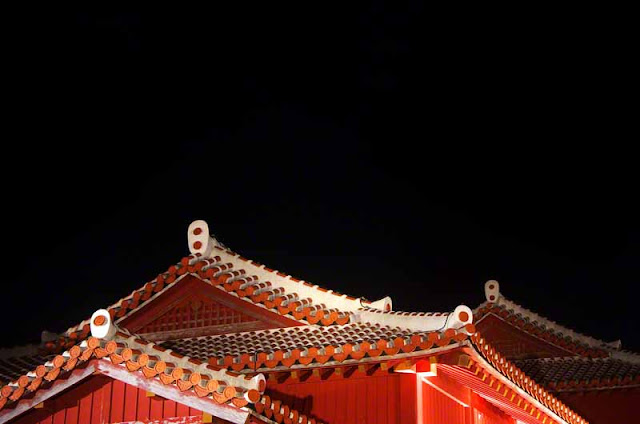 There's plenty of sky above this shot if sombody wants to advertise castles, or red-tile roofs. 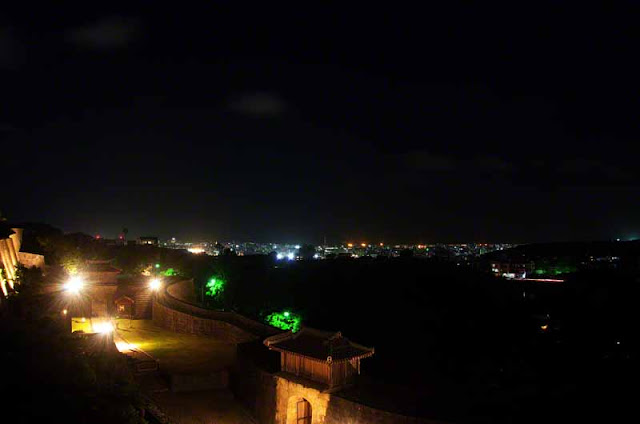 That's Naha City and the port down below. 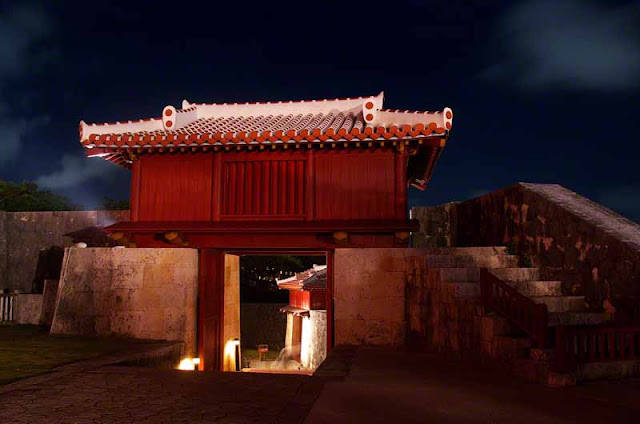 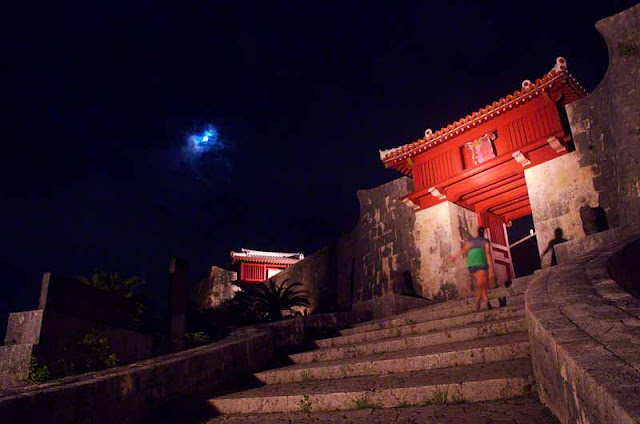 This girl and her shadow, I let slide just because.  Heck, I don't know why. 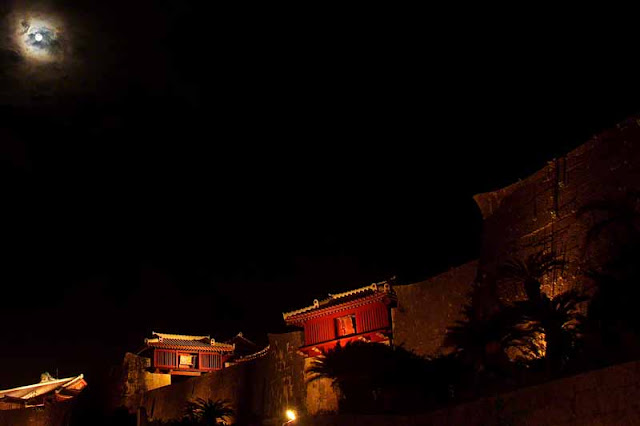 The moon never shined the way I wanted it to but, it will sometime and I'll be ready. 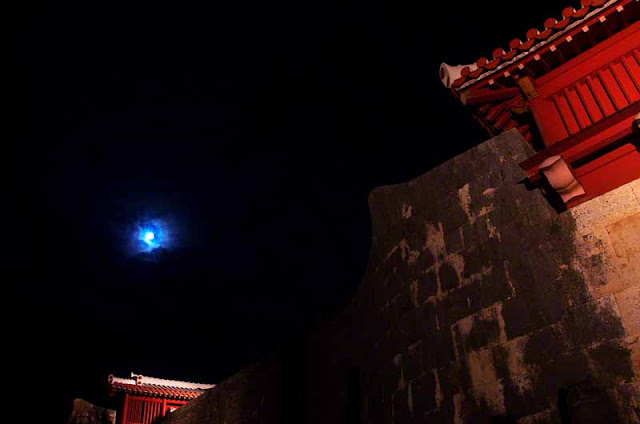 One of these days, there will be a great big pizza pie moon shining right here and I'll be waiting with a wide angle lens.  I'm gonna nail that sucker.  It's only a matter of time.
Probably, maybe, I'll get permission or something.  We'll see.
A couple of years ago, Doc and I were taking photos at Shuri Castle.
WE GOT BUSTED !
The same security guy who escorted us was there at the Moon Viewing Festival, Sunday.
Just as I was going to snap a mug shot of him to give Doc as a souvenir,
HE LOOKED RIGHT AT ME !
So, I drifted away among the crowd, real quick.
Seemed like he was a little guy, a few years ago but, he looks a lot meaner, now.
This time, he made the ground growl under my feet.  Maybe he has karate chops for breakfast !
Life has taught me.  Don't mess with karate dudes.
The only martial art I ever gained much skill in has been collecting ex-wives.
If I go back to shoot the full moon at Shuri Castle again, ahem, ahum..
Do You Think It Would Be A Good Idea To Get Permission ?
VISIT MY WEBSITE FOR THE PHOTO OF THE DAY

Posted by RyukyuMike at 3:31 AM

I liked these photos! The girl and her shadow (thanks for pointing that out) added interest to the composition. Nicely done!

Unknown,
Thank you. Sometimes, a character in a photo does give the viewer a sense of scale.