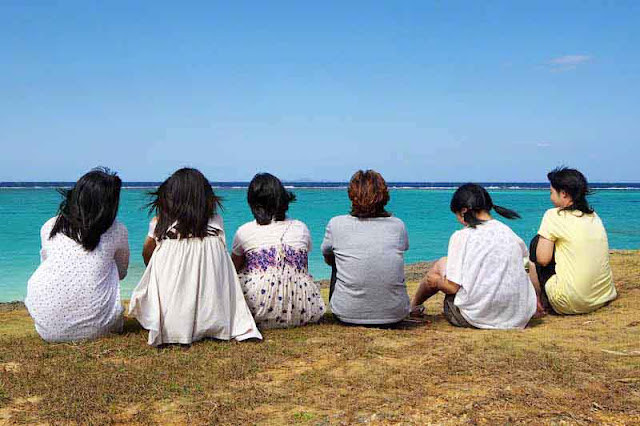 Yesterday was no exception.

The location, this photo was taken at, is in Nakijin, Okinawa, Japan.

We went there looking for Shokitan Motoo, the fisherman.

He was promised a print, because he signed a model release for me in September.

His photo was taken at almost the exact same spot.

Only, I had his face in the picture.

The Fisherman was Nowhere to be Found

Shokitan told me he'd be easy to find, when I came to deliver his picture.

He said, "Don't worry.  Everybody around here knows me. They'll show you where I live".

Now Look at the Third Gal from the Right

She was standing on the coral, watching the other five youngsters on the beach below.

When I showed her the fisherman's photo, she said she knew him, and where he lived.

It was looking like the start of a great day.

There are an unbelievable amount of photos, I owe to people.

Sometimes, it can take up to six months to find them.

This was going to be easy.  Just wait for her friends to get done frolicking on the beach.

Then, she would lead us to Shokitan's house.

While we're waiting, I made small talk. Like, "Nice weather, huh"?

And she make small talk back.  Just like with my wife, I pretend I'm listening.

At some point, she asked if I'd take a picture of her friends.  Why not ?

Map It Okinawa Dude Shows Up

After filling him in on what's going on,  I take Shokitan's picture and put it in the car.

Map It Okinawa has a chance to get the girls posed while I grab a camera and tripod.

He decided to have them pose, looking out towards Izena Island.

At that point I was little bit confused.

But, when you get my age that happens, sometimes.  I'm getting used to it.  Hah !

Moving around, making a few different compositions, I finally had enough.

"Everybody, git up and look this way," I said.

They did, and I snapped a photo with people's faces in it.

Then,  had each of them pose quick, for an individual photo. Real quick, one shot apiece.

The line of business I'm in requires signed model releases so, I grabbed a stack of them.

The girls were all excited.  I would email them photos for free.

They might see their photo in a magazine, on my blog, or, even in a contest.

Pretty girls, on a sunny day, at the beach, got their pictures taken.

They were all excited,  writing down names and email addresses, to give the cameraman.

The emails go to their cell-phones.

16 Mega-pixel photos will be shrunk-down to 300 pixels wide to fit in their phones.

The kids are minors.  In Japan you aren't an adult until the age of twenty.

A parent, or guardian, has to sign the model release.  Double groan.

These were some high school kids, young enough to be my granddaughters.

They were on a four day visit from mainland Japan.

Maybe, I could have gotten model releases signed by the woman they were staying with.

These travelers can get their miniature photos from me via cell-phone.

But, I got thinking.  If they wanted a printable file, that wouldn't work.

In exchange for Mom and Pop's model release via email, I could send them a huge

If I create a bunch of 600 pixel files and load them up online I could email links to the gals.

That way the parents could decide if they want to send me a model release.

Posted by RyukyuMike at 3:51 AM