Inscribed in Stone US Navy on Ojima in Okinawa 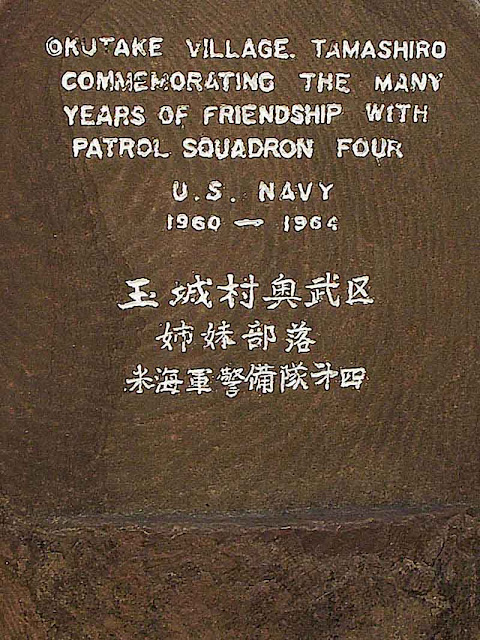 Ojima, part of Nanjo City, is separated from the main island of Okinawa, Japan.

By bridge, it doesn't take a minute of driving and you can say, "I'm off Okinawa and on another island."

This inscription, on a stone at the end of the bridge indicates the US Navy was there.

At least, that's what is written in stone, would have you believe.

So, I shot this photo to remind me it needed some research.

Ojima, Oojima, Oshima, or, Ou Island, whatever you want to call it, is really small.

A person could walk the whole island in less than one hour.

It's impossible to get lost, for more than twenty minutes, I know.

That's because I tried it several times.

Knowing the US Navy has some humongous boats, I figured, they must have kept small ones here.

I saw them in a movie once and know they would fit in the small harbor at Ojima.

Big battleships and aircraft carriers wouldn't be able to squeeze in the port here.

Holy Mackerels, they were some kind of airplane bomber squadron !

Here's a quote from their history page:

"From this base, the squadron flew reconnaissance and Anti-Submarine Warfare (ASW) missions

to counter the Communist Chinese threat to the islands of Matsu and Quemoy."

They call themselves The Skinny Dragons.

Naha, is on the west coast of Okinawa.  That would be facing China.

Ojima, happens to be off the east coast of Okinawa.

Now, I'm wondering.  What were those Navy guys doing over there ?


Being it is the Chinese Year of the Dragon, I'll try and solve the mystery before year's end.

Posted by RyukyuMike at 1:34 AM