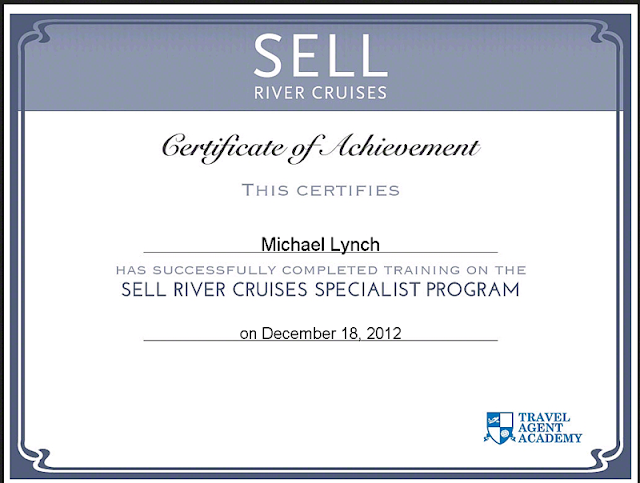 That piece of paper I got today was the toughest course I've had at the Travel Agent Academy.

What happened, was, I thought I'd get educated on river boats in Asia.

That's because I saw some cool boat pictures from a travel site in Malaysia.

Asia, happens to be where I spend most of my life.

To become a River Cruise Specialist, you have to study the whole world.

It was like taking all the World History and Geography classes I ever had and,

CRAMMING THEM INTO THREE TESTS !

Today, I saw Europe, Russia, Egypt and all the places in Asia where big boats don't go.

Not only did I learn about the longest rivers in Europe, Russia and China.

They even told me where General George Patton is buried.

And, now I know where the biggest parliament building in the world is located.

River Cruises Are in Demand

People want to get off the beaten path to experience something different and new.

It's an exploding market worth, learning about so, that's why I went back to school.

Banged my head, a few times but, I gotterdun !

Posted by RyukyuMike at 1:38 AM

Congratulations! I believe it's a great thing to keep learning new things during life.

Freya,
Yup. If ya don't learn something new, everyday, then ya ain't living right ! Thank you.