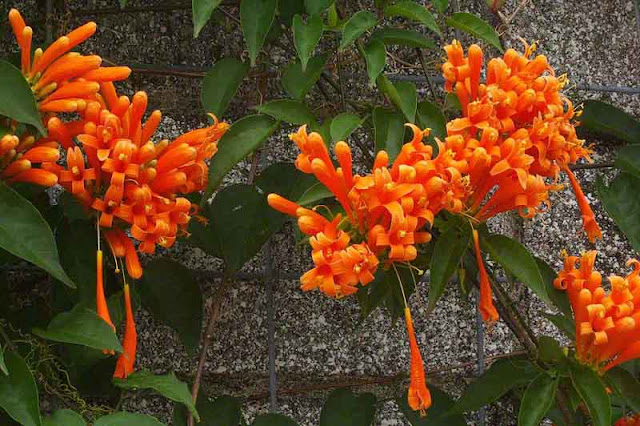 It took awhile to nail the name of these brilliant, orange flowers I shot today.

These guys were hanging off the roof of a building up in Motobu.  I had to get a photo.

The mission we were on was to shoot Buddha and the bamboo in morning light.

Once that was accomplished it was time to goof-off.

When I saw those flaming vines Map It Okinawa Dude let me loose.

This is a flower, I've been meaning to shoot and identify for over a year, now.

Taking the Photo was the Easy Part

The rest of the story was a little bit different.  I thought I had it made.

There was a flower nursery across the street from where  the orange flowers were hanging.

As soon as I opened the door, a pretty gal was standing in front of me.

But, the place wasn't a nursery.  It looked like a coffee shop.

Anyway, I showed the girl the photo and pointed across the road to the flowers.

And, I asked her if she knew the name of the plants.

No luck.  She asked a taxi driver, parked out front.  He didn't know, either.

They both suggested, I go back across the highway and ask a flower shop.

The signs weren't in English but, I know "花" means flower, when I see it.

It just seemed like every flower store in town was sleeping-in late or, abandoned.

About to give-up and head back to the car, I spotted a farmer behind one of the nurseries.

Farmers are good people.  It's easy for me to make friends with them.

It's probably not a great idea to run up to one, if you're a foreigner, and shove a camera in his face.

So, I do stuff like say "Hi" and start complaining about the high cost of my flip-flops.

That gets him laughing.

Then, I shove the camera in his face and ask what those orange flowers might be.

He was a real nice guy and told me "Kaen Kazura."

Before I thank him and leave, I have to make sure I pronounce it right.

He has to yell, real loud to correct me because I don't hear so good.

Gotterdun, I thought, mumbling "Kaen Kazura" all the way back to the car.

From inside my camera bag I grab a marker pen and write it down on my hand.

The Fun Begins with Online Research

None of my search engines leads to a flower named Kaen Kazura.

Somebody should come up with a better way to ID Flowers on the internet.

Finding scientific names to match a photo is too time consuming.

The Flame Vine is a Pyrostegia venusta from South America.

That crazy marker pen has some kind of waterproof ink in it.

Now, my left hand looks like it had a tattoo carved on it by a do stuff yourself artist. 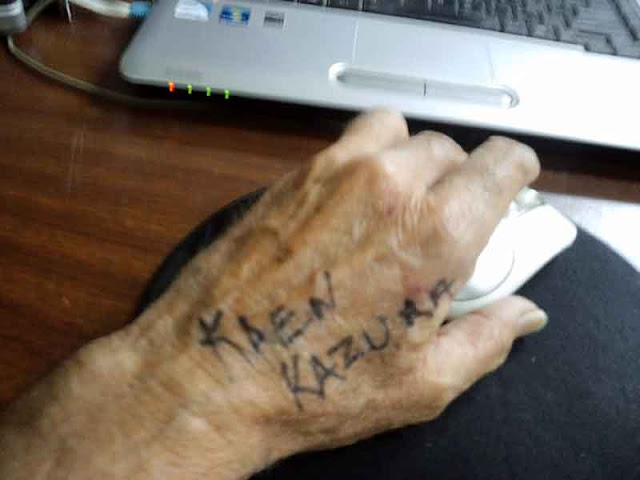 Does anyone know a way to scrub it off without losing all my skin ? 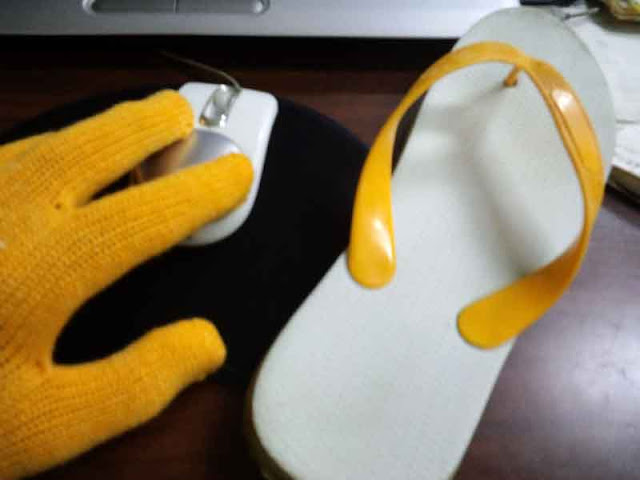 Or, should I just wear the gloves I bought to match my flip-flops 'til it wears off  ?