Ten Photos From an Incredible Day in Iris Fields

After listening to all the weather gurus predict a lousy day, I came up with a plan.

Take the wife to the iris fields.

For the past five years I've been shooting photos of the flowers and she's never been along.

She loves the photos she sees as I develop them and always says, "I want to go with you."

Flower photography is work, for me.  She thinks I'm having fun when I go up there.

So, I figured, alright.  We're probably going to get rained-on so, It will be a quick trip. 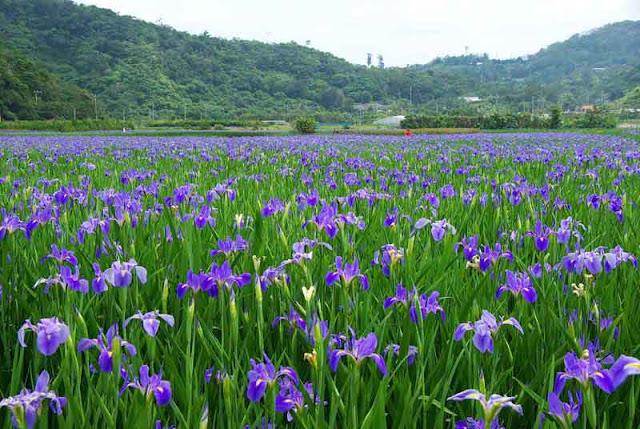 It was a little bit cloudy and hazy when we first arrived in Kijoka.

A lot more flowers were blooming than what we saw yesterday.  That surprised me.

Busloads of tourists hadn't started crowding the fields, yet.

Just a few die-hard photographers were in the fields taking photos. 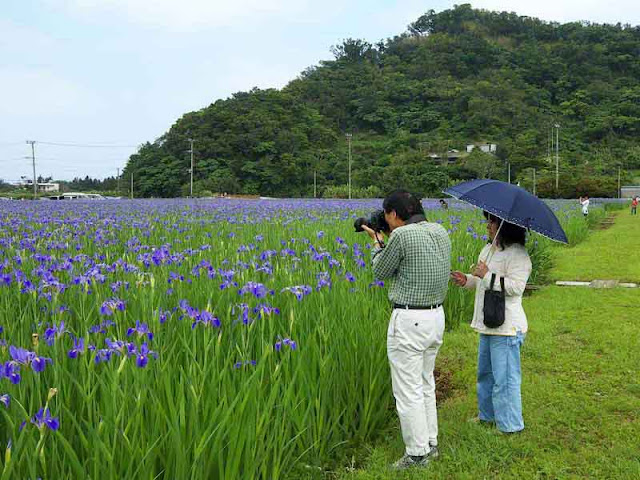 This guy was good.  He could shoot without being distracted by his wife. 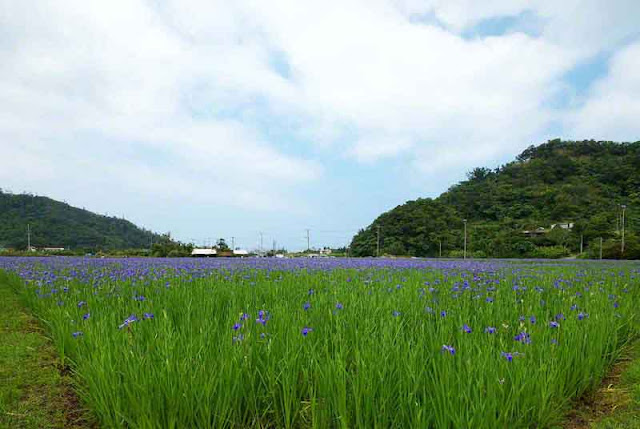 That's the sign of a real pro.  Nobody's allowed around me when I'm shooting. 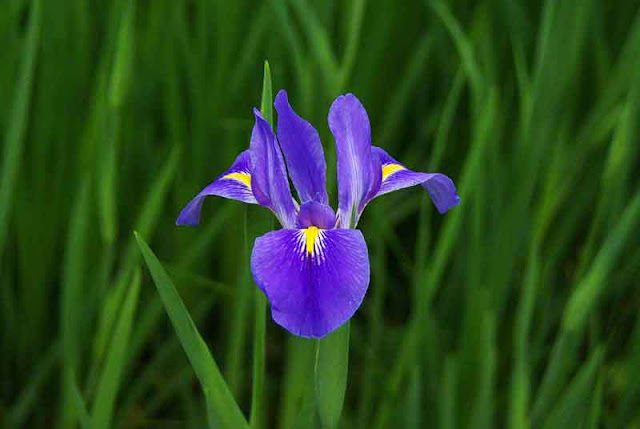 My goal, is to find an iris that looks like a dragon sticking its tongue out.

So, I wander off where nobody can bug me. 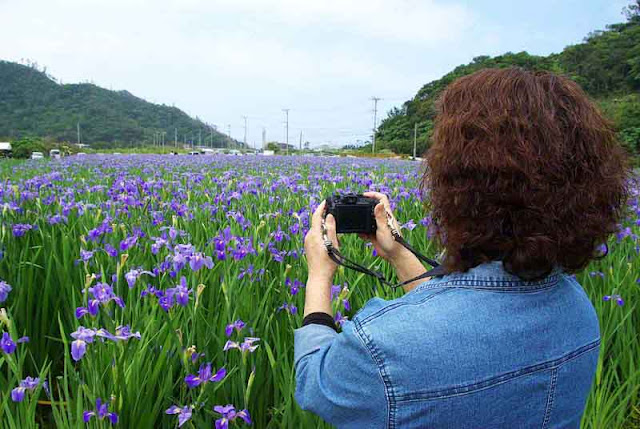 Here's what I did.  Gave Mrs. RyukyuMike the Canon G 12

With that camera in fully Auto Mode she stays busy, while I go my own way. 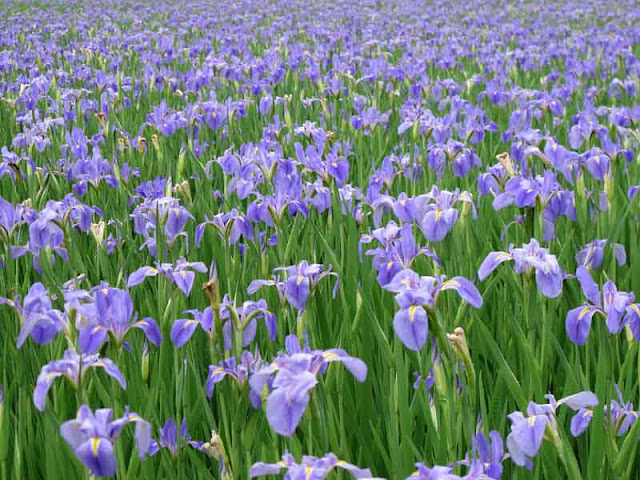 This is one of the photos she shot. Not too shabby for a handheld point and shoot. 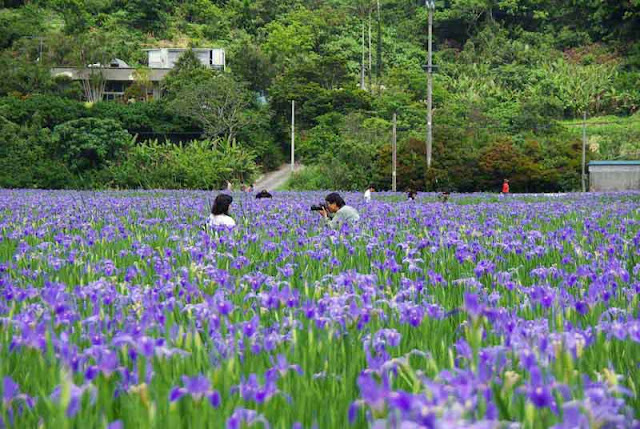 That other cameraman took his wife out and shot her in the field. 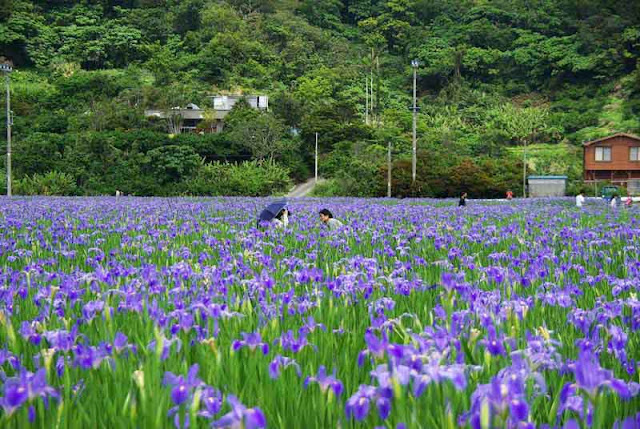 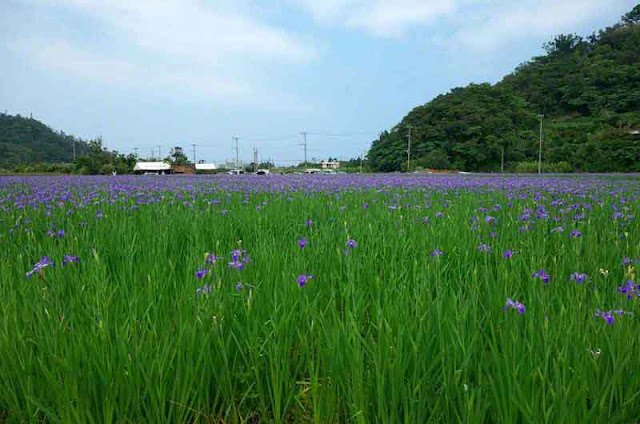 After about an hour I was getting hungry and, tired of shooting flowers.

So, I had to figure out where I lost the wife. 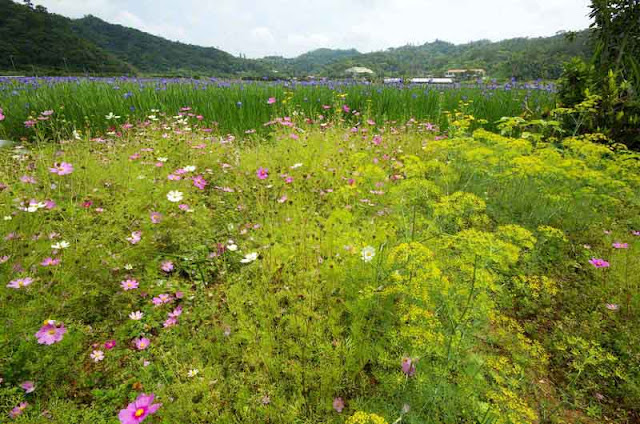 Once I found her I said, "Look Honey.  There's cosmos over there."

That got us closer to the car.  And, I said, "Aren't you getting hungry?"

"We should get out of here before it rains and go find someplace to  eat."

It wasn't just an incredible day in the iris fields; it was an incredibly lucky day for me !

Everyone should take the time to visit my "Always Entertaining Friend"

OKINAWA SOBA and Checkout his Iris Photos from 2013

Posted by RyukyuMike at 5:03 AM

"...That other cameraman took his wife out and shot her in the field..."

All great photos. I put up a few of my own KIJOKA IRIS pics on Flickr, and provided a link to you blog for those that might want to see more.

Your coverage was nice.

Okinawa Soba,
Honored to have you visit and comment. I'll have to go over and peek at your Flickr photos and maybe, put a link on this post back to you. Thanks !