What's Wrong With That Picture? (Photo) Knives and Bullets

It's been awhile since I've written a What's Wrong With That Picture.

So, I'd better explain.  I already know what's wrong with this photo; it was taken in a hurry.

But, it is related, somewhat, to the picture I want you to take a look at. 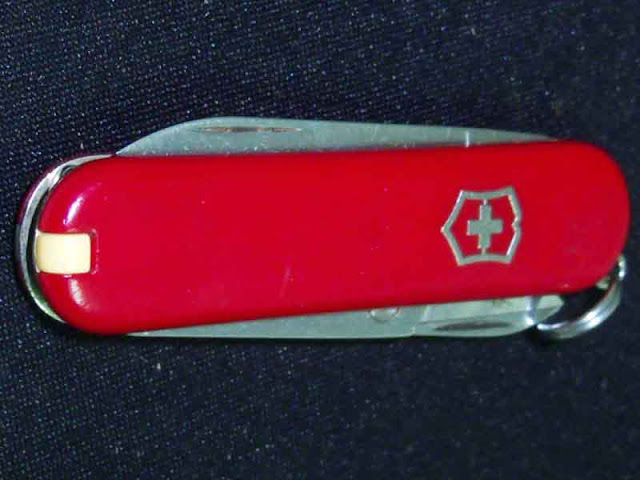 The good news is, this Swiss Army Knife can go on an airplane with me, again.

Southwest Airlines doesn't like it but, they shouldn't worry.

Nobody's planning on poking a flight attendant with one of these little knives.

There Are More Important Things to Be Concerned About

The United States of America is buying gazillions of bullets for Homeland Security.

Millions of them are hollow point rounds.

These type bullets are illegal to use in combat, according to international law.

and Department of Homeland Security get to use the cop-killing ammo.

See for yourself and after you read the article come on back and tell me....

What's Wrong With That Picture ?

More What's Wrong With That Pictures in THE DOOZIES

Hi Mike!
I looked into that purchase of those bullets and "tanks: and discovered that it isn't exactly true. Quite a bit fewer bullets were ordered for officers to use in yearly training.
No tanks were ever ordered.
Check on Snopes...
http://www.snopes.com/politics/guns/ssabullets.asp

David,
Thanks for stopping by and passing this on. Still don't see anything wrong with that picture ?

Mike, you're right. There's so much wrong with this picture! It doesn't matter whether the Social Security folks bought a billion or a million hollow point bullets or bb's for a Red rider BB gun with the compass in the stock, they shouldn't be buying any bullets period! What are they going to do with them, shoot people so they don't have to pay their benefits anymore? I guess that's one way to get the deficit under control. Talk about stoopid stuff going on in the world these daze, that about does it.

Doc,
Well, I thought about joining-up with the Swiss Army but, apparently I've exceeded the age limits. Ratz !

All those bullets are a little scary. Hey, I'm even worried about Swiss Army knives on planes.

Janie,
What a wonderful world we live in, eh ?